The madness of Kevin Spacey

Kevin Spacey fitting into the deformed physiology and twisted mentality of “Richard III” is much too predictable.

Spacey has played the classic villain in “Seven” and “Superman,” and Richard III the Shakespearean protagonist is hardly the classic tragic figure and more of the irredeemably bad guy: “I am determined to prove a villain,” he says, “(a)nd hate the idle pleasures of these days.”

But if the fit is too perfect and predictable, Spacey, in the last installment of the transatlantic Bridge Project that has just toured Singapore, manages to inject into the role something surprising and invigorating. He does so mainly through black humor and occasional camp.

When Richard seduces  Lady Ann, the wife of the man he has  murdered, and choosing for the occasion of the seduction the funeral of her father-in-law whom he has also killed, the absurdity of the situation is heightened when Spacey turns to the audience and gapes, astounded at his feat. Indeed, what cheek it must have taken!

Judging by the fact that the audience at Singapore’s Esplanade Theater remained transfixed on the stage (the production ran three hours and 15 minutes, and “Richard III” is the longest play in the Shakespearean canon after “Hamlet”), Spacey and director Sam Mendes have been successful in making “Richard III” a transatlantic drama whose message of power and its corruptibility resonates well in the new century.

The production is also a fitting close to the Bridge Project, the  international theater partnership that Mendes and Spacey, 1999 Oscar Best Director and Best Actor for “American Beauty,” have formed.

Previous Bridge Project productions which toured Singapore were “The Winter’s Tale” (2008) and “The Tempest.” The former was made more memorable by the participation of Hollywood actor Ethan Hawke, of “Dead Poets Society” and “Sunrise/Sunset” fame; and Rebecca Hall, who played Vicky in Woody Allen’s “Vicky Cristina Barcelona.”

More specifically, the Bridge Project is a partnership between the Brooklyn Academy of Music Arts (BAM); the Old Vic of Great Britain, headed by the American Spacey; and Neal Street Productions, founded and headed by the British Mendes. It seeks to bring original productions of classic plays directed by Mendes to New York and on an international tour. 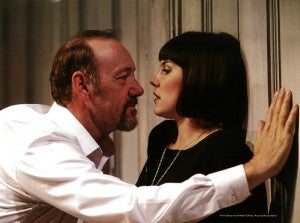 The Singapore run was “co-commissioned” and presented by the Singapore Repertory Theater, which had mounted “An Intimate Evening with Lea Salonga” in 2005.

“The idea behind the Bridge Project was born out of a simple desire: a wish for artists, collaborators and audiences on both sides of the Atlantic to experience one another’s work, talent and artistry in the theater,” Mendes said.

Surely, Bridge reserved the best for last by touring its well-received production of “Richard III” in Singapore. Although the two previous plays were fantasy  plays, the last installment was dark though alleviated by the staging’s campy humor.

Richard III is described in the play as a “bottled spider,” and his physical deformity is magnified on stage as Spacey and the production have his crippled left leg in a brace and withered left arm in a leather casting.

His manic movements thereby become like the frenzied whirling of a dark, malignant spider, especially in the last half when finally, as king, he wears a Nazi-dark military uniform, which altogether makes him appear consumed by the darkness he has enveloped around his kingdom.

A tale of political intrigue, especially if it’s based on history, has universal application, so Mendes situates the play in the contemporary. Mendes uses color-coordinated costumes, evoking the War of the Roses, to pit one faction against the other.

Tom Piper’s stage design appears to strive for an everywhere feel: burnished brick walls and gallery of gray-white doors, which both help the audience focus on the drama on stage while at the same time symbolizing the growing constriction of the kingdom and its people because of the wiles and machinations of Richard.

In the production notes, Spacey and Mendes make mention of fallen Libyan leader Ghaddafy as one of the models of their contemporary interpretation of Shakespeare’s warhorse. Which should show that “Richard III” is emblematic of the diabolic reaches of power and corruption.

A 16th-century play about a 14th-century historical character has proven resilient and relevant. As the Shakespeare scholar Harrold C. Goddard has said, “The world is forever catching up with Shakespeare—only to fall behind him again.”