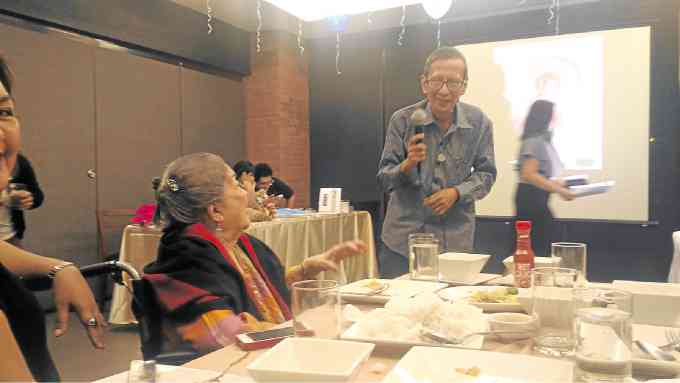 She’s very fond of young people. She seduced me.”

Robert Lane, an American expat businessman, said this over the microphone in a big function room full of people, eliciting laughter.

The “seductress” was theater legend Naty Crame Rogers, 93, who was being given a simple tribute at the recent launch of her biography in a restaurant near her house in Pasig City.

“During our younger years, she was called—in today’s parlance—a cougar,” Lane said. “And for the longest time I was waiting for the ‘Tawag ng Tanghalan,’ but all I got was the call of nature.”

Crame Rogers, still sharp and spry, replied: “Oh, I enjoy flattering young men. Robert, where is your wife? Is she with you now?”

She looked around as Mrs. Lane smiled and waved to all from a table behind. The Lanes own and run Silahis Arts & Artifacts in Intramuros, and are lifelong friends of the honoree.

Lane was referring to being seduced into acting for the stage, which Crame Rogers did when she got him to play Charles Kipping in Severino Montano’s “The Love of Leonor Rivera,” and cast him many times as Don Aristeo in “A Portrait of the Artist as Filipino.” Lane even produced a rerun of “Leonor Rivera” at Ilustrado Restaurant in Intramuros.

Lane is one of many who were plucked from leading “ordinary lives” into being part of Aming Tahanan Sala Theater and its resident group, the Philippine Drama Company, both of which Crame Rogers is founding artistic director.

An institution in Philippine theater, Crame Rogers has been an actress, director, producer, theater book author and drama teacher, living by the mantra “Life is drama, drama is life.”

The sala as a stage

She established the Philippine Drama Company-Sala Theater 32 years ago under the principle that, as Guerrero wrote in the book: “Dramatists can use their own homes as a workplace, a tradition among Asian artists, by converting any open space such as the sala into a stage.”

Crame Rogers believes that if people find going to the theater hard for various reasons such as traffic or busy schedules, then why not bring theater to their homes? She is her own example: Except when she got ill, she’s been using the sala or living room of her home in Brgy. Kapitolyo in Pasig City as a performance venue.

Her immediate family members, nephews, nieces, neighbors and students rotate roles as actors, backstage crew and audience. When her husband, Philippine Air Force pilot Col. Joe Rogers, was still alive, he either acted in her plays or served as part of the backstage crew.

A common scenario in Sala Theater productions is the audience becoming part of the show; a major aim of “seducing” people into such a setup is to help them “become better individuals after experiencing theater,” said Crame Rogers.

The book was proposed by Guerrero three years ago. He met Crame Rogers sometime in 2013 when Inquirer Theater editor Gibbs Cadiz assigned him to do a story on her.

Rodrigo recalled the meeting between her aunt and Guerrero.

“They met in Ilustrado Restaurant while our group, the Philippine Drama Company, performed there. Ma’ Naty fondly recalled the friendship between her and his uncle, the famous Wilfrido Ma. Guerrero, who was responsible for her theater debut in the play ‘Wanted: A Chaperone’ back in the late 1940s at University of the Philippines (UP).”

Crame Rogers recalled the meeting a bit differently. “When he proposed the idea, I couldn’t believe it because from my experience in my younger years, the Guerreros are suplado (snobbish),” she said impishly.

To which Guerrero replied: “No, I’m not like that. I came from the poor Guerreros.”

Writer and subject immediately hit it off. “The first time we met, she called me her angel. Now we’re like soul mates,” said Guerrero.

The 70-page biography traces Crame Rogers’ journey from early childhood to her education with German nuns at St. Scholastica’s College, her college years in UP and abroad, how she survived World War II and met her husband—and that, in 1946, she was actually part of the second batch of flight stewardesses of Philippine Airlines.

For theater historians and aficionados, there are chapters on four National Artists Crame Rogers worked with, and the groups they established: Severino Montano and the Arena Theater, the celebrated couple Lamberto and Daisy Avellana and Barangay Theater Guild, and Rolando Tinio and Teatro Pilipino.

She also discusses Sala Theater and her life as teacher and director, as well as musings on chamber theater, drama, literature, human relations and life in general.

Crame Rogers will celebrate her 94th birthday on Dec. 23. She has two caregivers who live with her. She has had bad falls in recent years, so she moves around on a wheelchair. Rodrigo lives near her to attend to her needs.

It was also Rodrigo who pushed for the book’s publication against daunting odds. Initially, she approached established publishing houses. “But it was either they had reached their work load for the rest of the year, or they had so many tedious requirements or paperwork.”

“I told myself, let’s get this done,” she added. “Let’s make Naty Crame Rogers happy; she deserves to be. I organized my team of family members and close friends so that this project could materialize. Ma’ Naty is very happy and proud of the book.” —CONTRIBUTED