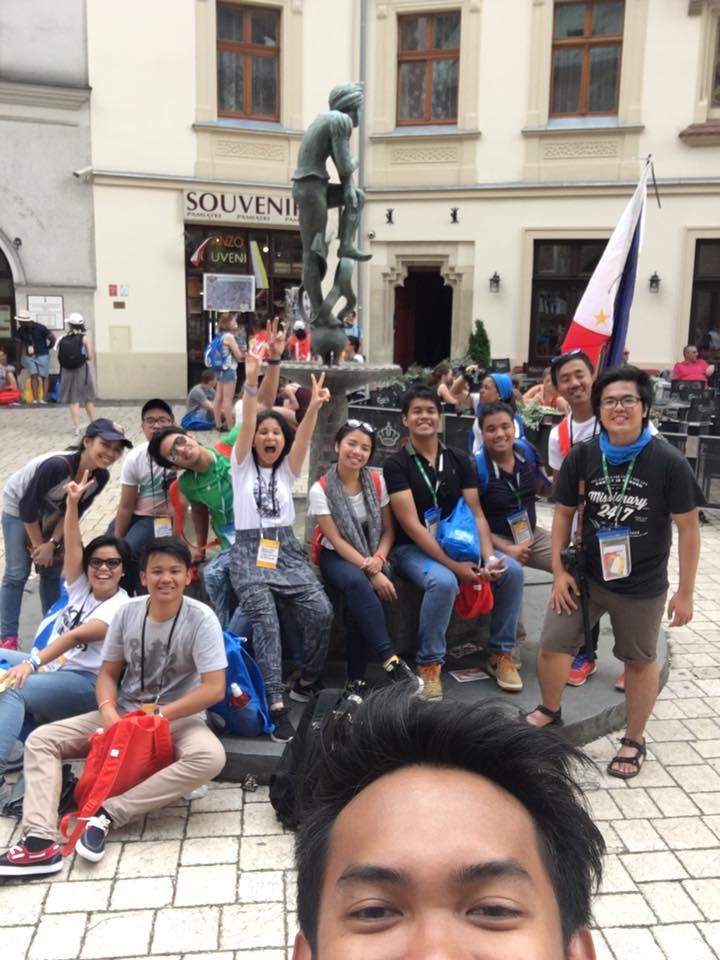 The delegates at the main market square of Krakow —EUNICE CUBE

Not all teenage students get to participate in the World Youth Day (WYD) celebration held only every three years. More so, not all teenagers get a chance to go overseas and join the international religious event organized by the Catholic Church.

When WYD was held on July 25 to 31 this year in Krakow, Poland, 15-year-old Piper Acero was one proud delegate who joined an estimated 3 million pilgrims from around the world.

A senior high school student at Assumption College in Makati, Piper is the only child of Arthur Acero and Josephine Natividad-Acero. She was approached by her former club moderator from Couples for Christ Youth for Family Life (CFC YFL), who asked if she was interested to join this once-in-a-lifetime event.

To prepare for WYD, the Episcopal Commission on Youth organized an overnight retreat for all the sub-groups to orient the pilgrims for the event.

“Personally, I prayed a lot about this trip since it was my first time traveling without my parents,” Piper said.

While she has traveled extensively to the United States and Europe, Piper was still doubly excited about her trip to Poland. She brushed up on her knowledge of the country, particularly on the city of Krakow, since the place has a significant legacy to the WYD celebration.

Krakow was the homeland of St. John Paul II, who started WYD in Rome in 1986. The gathering in Krakow last July also marked 30 years since the first WYD celebration. It was the second WYD held in Poland; the first was in 1991 in Czestochowa.

When everything had been accomplished and Piper was ready to travel to Poland, her Cathay Pacific flight was cancelled due to the damaged runway at the Ninoy Aquino International Airport (Naia).

“Thankfully, Cathay Pacific provided an overnight stay in a nearby hotel and free meals for all the passengers on the cancelled flight,” recalled Piper.

Save for that hitch, Piper made it safely to Poland. “One of the most memorable incidents of my trip were the Days in the Diocese (DID), a pre-WYD activity, where pilgrims get to stay with a Polish family for a week,” she said. “We got to experience activities in Warsaw and the overnight vigil with the Pope in Campus Misericordiae (Field of Mercy).”

Their meals in the overnight vigil were handed out by the military. “Pilgrims were encouraged to walk to Campus Misericordiae since our village, Pawlikowice, was a good 8 kilometers away,” Piper pointed out.

Each pilgrim received a pack that contained a backpack in the WYD colors—yellow, blue and red. There were also books about WYD, a bandana, rosary baller and a towel. “Everything was very cool,” Piper said.

“The people I met were very nice and accommodating. Despite the language barrier, the WYD volunteers and our host families always made an effort to get to know us better and made our stay in Poland as memorable and meaningful as possible.”

Since many of the main events of the WYD were held in the city, Piper went around Krakow and saw its attractions. “During the week, various activities were held for the pilgrims, like the Pilgrimage of Mercy, Catechesis in our parish, the welcoming ceremony with the Pope, Way of the Cross and the overnight vigil and mass with the Pope,” she said.

Unfortunately, Piper failed to see the Pope up close, but it never disheartened her. Three months after WYD, Piper gets giddy every time she remembers and talks about the experience.

She still finds time to bond anew with her fellow delegates, just like their recent get-together at Bonifacio Global City. To her, being one of the student delegates from the Philippines was a chance in a lifetime and she considers joining WYD as a life-changing experience.

“I have a better perspective of my faith after my trip to Poland,” Piper said. “It was really amazing to see many young people gather to celebrate the Roman Catholic faith. To me, it was very beautiful to see.”

The biggest lesson from Piper’s WYD experience is that, “in order to spread the message of God’s love, one cannot simply be, in Pope Francis’ words, a couch potato. Each one of us is challenged to spread the faith every moment of our lives by doing good works and in turn, impacting people to do the same.”

World Youth Day in 2019 will be held in Panama.