The burden of the ‘Beasts’ | Inquirer Lifestyle ❮ ❯

The burden of the ‘Beasts’ 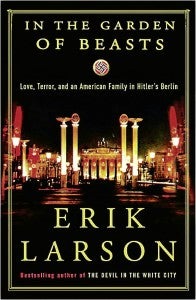 Sometimes, fiction falls short of the unexpected twists and turns of real life, and from such occasions are born great books of nonfiction. From such a tradition emerges Erik Larson, a master craftsman of reality’s drama, as seen in his previous books which thrillingly chronicled serial killer activities amid the 1893 Chicago World’s Fair (2004’s exquisite “The Devil in the White City”) and the seaborne chase to apprehend a murderer escaping on a ship (2006’s exciting “Thunderstruck”). Now he comes up with something a little different.

For good nonfiction, you need a historic time, for good or ill. It is not so much the people but the year that Larson effectively writes about in his newest book,  “In the Garden of the Beasts: Love, Terror, and an American Family in Hitler’s Berlin” (Crown Publishers, New York, 2011, 448 pages). In many ways, he is also writing about a lot of people—an entire country—falling into a kind of shared bloodlust.

What Larson writes about in “Beasts” is the shocking yet inexorable rise of the Nazi regime in pre-World War II Germany. In the early 1930s, Germany is not yet the ruthlessly efficient war machine that it is once it invades Poland by decade’s end. Instead, Germany is a dynamic country rising from the ashes of the First World War, marching forward to the beat of a charismatic young leader. The only problem is that leader turns out to be Adolf Hitler, der Fuhrer, mass murderer and one of the greatest villains of history. But though he is a major player in “Beasts,” he is not the focal point of the book.

Instead, “Beasts” focuses on the Dodd family, thrown into the riot of European geo-politics in 1933. The scholarly William E. Dodd is pulled from his comfort zone in Chicago by President Franklin Delano Roosevelt to fill the post of US Ambassador to Germany. The frugal, conservative William is not tailor-made for the job, and is soon sending remarkably long letters to Washington about what is going on in Germany. Despite a few diversions along the way, William realizes the Nazis were creating an oppressive atmosphere of anti-Semitism that promised to get out of hand. His missives to Washington are met by snobbery and skepticism.

But it is William’s daughter Martha who is truly at the center of “Beasts.” A free spirit who is also smart and sexually liberated, Martha arrives in Berlin and soon falls for the Nazis’ smoke and mirrors. Her dalliances send Berlin high society all a titter. Attending party after party, she becomes the toast of the town, and is even set up to meet Hitler socially.

But one frightening event after another soon has Martha coming to the terrible realization that not only is something going horribly wrong in Germany, but that the German people were becoming willing accomplices to Hitler’s bloody rise to power and the genocide of the Jews in Germany. All this comes together during the final push that gave Hitler indomitable political and military power, that one night called “Nacht der Langen Messer”—the Night of the Long Knives.

Larson loads up “Beasts” with vivid, vibrant detail. For example, the title of the book is derived from the beautiful park across the ambassador’s residence, a park with the ironic name of Tiergarten, “the garden of beasts.” Aside from the close-up looks at Hitler and Hermann Göring, there are other intriguing persons of interest, most notably the enigmatic head of the Gestapo, Rudolf Diels. But it is Martha who invites the reader along on her own misbegotten journey to the truth and the reader will feel the same exhilaration, bewilderment and shame that Martha feels.

Instead of the pulse-pounding suspense of his last two books, Larson’s “Beasts” has a palpable, creeping sense of danger that starts just out of the corner of your eye but soon encompasses everything else. Well-researched and finely written, Erik Larson’s “In the Garden of Beasts” is a portrait of a nation slowly but steadily turning insane under the sway of madmen geniuses.