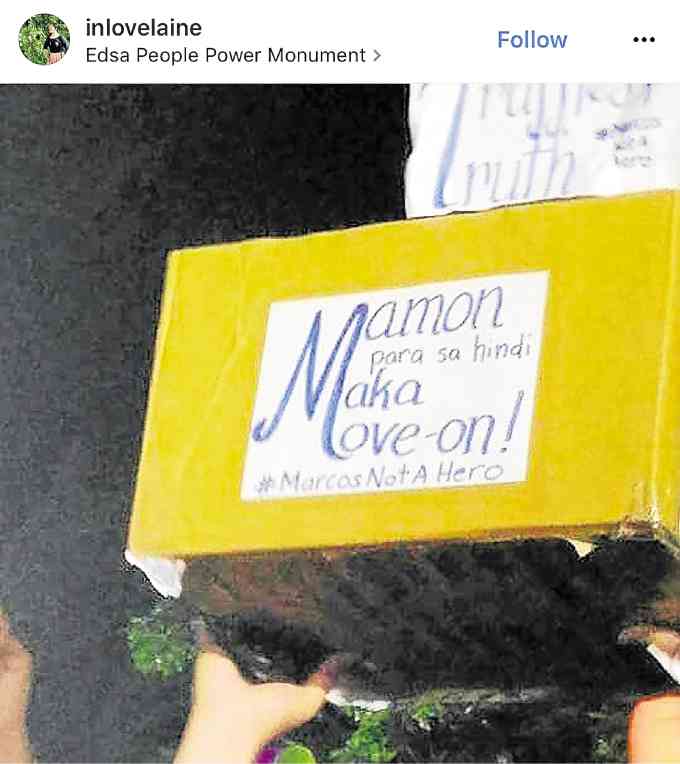 I thought I heard it wrong, but there was no one else there, trying to get past the makeshift barricade at the foot of the Edsa People Power Monument, just behind one side of the stage at last Wednesday’s rally.

It was one of the policemen guarding the area—which was cordoned off with some plastic twine—addressing me. We were looking for a place to sit, after standing with a throng of other protesters on Edsa, exhorting motorists to blow their horns.

After a brief moment of incredulity—Was it because it was dark? Was it my thick-rimmed hipster eyeglasses?—I started to see the humor in it.

Save for a smaller assembly protesting the same thing two weeks ago at the AS Steps in University of the Philippines Diliman, my alma mater, which I haven’t visited in years, I realized I must not have been to a political rally in so long that, in this mass gathering of predominantly millennials, I really have become ’Nay. Hindi man lang ’Teh or Tita, talagang ’Nay!

Getting past the mamang pulis, we found ourselves resting our ’Nay bodies at the foot of the monument with women in a similar ’Nay age group, all speaking in colegiala English. I thought, how decidedly bourgeois!

“Burgis na burgis nga, eh!” said our friend and officemate Dindin—who was at Edsa I when she was this small, and was among the first to arrive and last to leave last Wednesday—relating how she and her friends had their car valet-parked in Ortigas before hightailing it to the rally earlier that afternoon. A long row of parked sedans and SUVs took up one northbound lane of Edsa. We arrived and left on Uber.

Dindin was happily munching on a cookie. It was from youngsters offering free snacks that she would otherwise say no to under more dubious circumstances.

It was these same young folk whose witty placards we took joy in photographing and sharing on social media: “Move on mo mukha mo”; “Make potpot to show your poot”; “Thesis ang nire-revise, hindi ang history”;

“You can never Obliviate us”; “Nawawalang tuta (with a photo of Sen. Alan Peter Cayetano); “Marcos yuck”; “F_ck you po, Marcos”; “Libing a lie.”

Behind us, seated in a long row on another ledge, were the rookie cops—they looked so young, I thought, oo na nga, we could be ’Nay to them—having their late dinner of styro-packed meals.

The female cops looked so weary and bored—the rally was peaceful and incident-free—Anne said they must have been feeling miffed that they were in the company of this burgis crowd, when they could be home resting. It was past 10 p.m.

Even we were tired and had to leave soon after. We were ’Nay, after all.