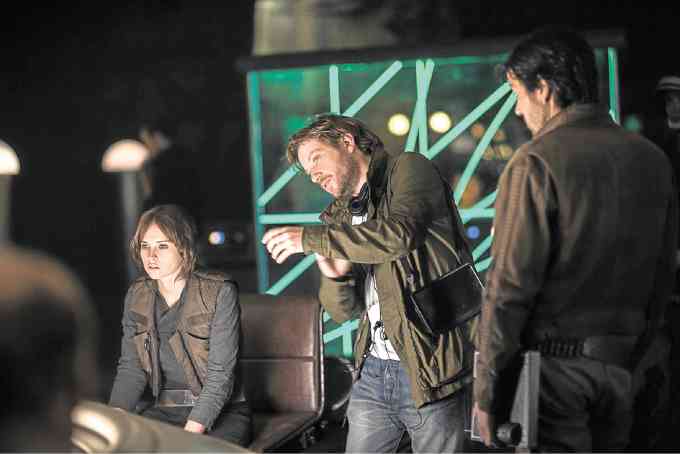 London—The trick to making a new Star Wars movie is how it calls back to the past but also to the future. George Lucas looked at archival World War II footage for the famous dogfight scenes in 1977’s “Star Wars: Episode IV—A New Hope.”

“Rogue One: A Star Wars Story” director Gareth Edwards looked at a different war for inspiration. “It goes back to doing Star Wars and trying to make it feel like Star Wars but not Star Wars, which is like a contradiction,” he says. Edwards looked at the Vietnam War. “The greatest of those films was ‘Apocalypse Now.’”

Edwards is director of 2010’s “Monsters” and 2014’s “Godzilla,” marking him as the unique director who has done both small independent films and big screen blockbusters. This is reflected in a distinctive, personal style of shooting scenes.

“I wanted to go for as much realism as possible in shooting the battle scenes. “The goal in some of the combat stuff was to make it feel like we were embedded with them. No rehearsals,” he explained. “We wouldn’t finesse it too much, and people would accidentally fall on each other and things would go wrong. Then we would just dive in with the camera.”

Actress Felicity Jones, whom Edwards had chosen to play “Rogue One” leader Jyn Erso, describes Edwards’ shooting style: “The whole methodology with ‘Rogue One, if there was a methodology, was to keep it very naturalistic, to keep it very immediate. He often holds the camera himself and he knows what he wants. He wants to be there with you with the character.”

Additionally, Edwards avoiding using green screens and opted to do a lot more Rotoscoping, which involved shooting actors on location and later swapping out the physical items instead of shooting everything against a flat screen. Having been deeply involved in visual effects prior to his directorial stints, Edwards plays close attention to the effects here as well.

Perhaps the trickiest part of making “Rogue One” was making a new Star Wars film that fit in the pantheon without repeating other films: “You put up a list of anything that’s possible. You take out anything that makes the galaxy feel too small. It gets reduced and reduced and you get more and more confident in your new characters. We exist within days of ‘A New Hope,’ but in different locations. So there are a lot of Easter eggs for people. But it’s really about the new things that you can do. The goal was to be able to remove all the old references, and the film would still work. Anything that’s in there has earned its place. It’s not just a nod and a wink to the fans.”

For example, Edwards points out that the droid K-2SO is essentially Chewbacca and C-3PO bashed together. “He’s a droid but he doesn’t really give a s__t about anything but his friend (Diego Luna’s Captain Cassian Andor).  Edwards says it’s all like that: “It’s Star Wars. It feels subconsciously correct but different.”

It’s a very big story that’s being distilled through Edwards’ vision. “At the start, we had enough material for a 10-hour film, and it’s heartbreaking pulling each part out like a game of Jenga, trying not to let it collapse, until you have the two-hour film. It’s such a rich playground and you can’t fit anything in. Thank god for toys and the Internet because people get to be exposed to it a lot more and fantasize about it.”

That’s because Edwards believes there are some things that remain the same for all essential Star Wars films: “It’s not like you can just get any kind of movie, set it in space and stick ‘Star Wars’ on it. It doesn’t work. It doesn’t feel like ‘Star Wars.’ It’s about a family connection. It’s about good becoming bad, bad becoming good. It’s about an ensemble. It’s an epic canvas. The backdrop is a war but at the heart of it, it’s more of an emotional journey.”

Edwards knows what kind of a unique opportunity “Rogue One” is. He knows its place in the universe: “Star Wars is about you getting a glimpse that suggests a whole world and this film is born from that. There’s just a bit of text at the start of the film and that created this entire movie. It’s kind of like a virus, the ideas within Star Wars,that catches fire into movies and all other kind of things.”