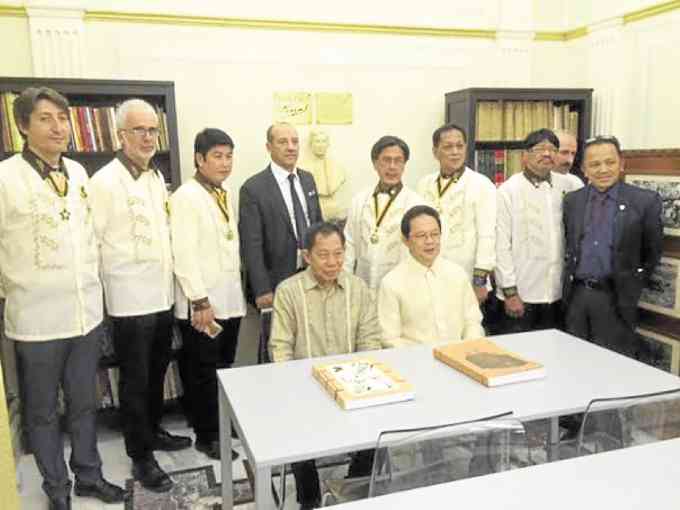 ROME—Sentro Rizal, the overseas Philippine cultural center much like the Instituto Cervantes of Spain and Dante Alighieri Center of Italy, has opened here and in Milan, two cities with the heaviest Filipino migrant presence in Europe.

The Rome inauguration on Nov. 29 was graced by Philippine Ambassador Domingo Nolasco and Felipe de Leon Jr, chair of the National Commission for Culture and the Arts (NCCA). Meanwhile, Consul General Marichu Mauro and De Leon inaugurated the Sentro Rizal in Milan on Nov 28.

“The Sentro Rizal is here so that Filipinos will not forget about their country,” said Ambassador Nolasco during the inaugural.

The NCCA established Sentro Rizal by virtue of Republic Act No. 10066, the National Heritage Law of 2009.

Although Instituto Cervantes and other cultural centers of major European countries function as “soft-power” projection and a vehicle for cultural diplomacy, Sentro Rizal primarily caters to the cultural formation of children of overseas Filipino workers (OFWs).

“Sentro Rizal shall offer Filipino language courses for children and adults, as well as exhibits, small concerts, Philippine cuisine lessons in all [its] branches.”

During the inaugurations, leaders of Philippine communities in Rome and Milan were treated to a lecture by De Leon.

Calling Rizal “the quintessential Filipino,” De Leon said Rizal represented the genius of the Philippine nation and Filipinos should find in him an exemplar of how to liberate their potentials.

A humanities professor, De Leon said nationalism and the humanities should go together, like Rizal who had a classic liberal education and who used his humanities training to help Filipinos unite as a people.

“We should liberate the potentials of the Filipino so that the Filipino can be a leader for human well-being, social well-being,” said De Leon, the son of National Artist for Music Felipe de Leon and himself, a musician and scholar of note.

“Filipino culture is the wellspring of national and global well-being. We have many things to contribute to the world. We should be proud of our culture.”

Ambassador Nolasco agreed. Nolasco said Sentro Rizal would foster the cultural education especially of children of OFWs in Italy while contributing favorably to the image of the Philippines as a creative nation with a unique heritage.

De Leon in fact presided over the formal closing of the Philippine Pavilion at Palazzo Mora in the 15th Venice Biennale for architecture, the first time that the country had participated in the prestigious festival.

Last year, the Philippines returned to the older Venice Biennale for the visual arts after 60 years.

Next year, the Philippines will again participate in the visual arts Biennale, but its exhibit will be housed in the main exhibit space at Arsenale, De Leon announced.

Consul General Mauro welcomed the establishment of Sentro Rizal, hoping that it would help in the formation of children of OFWs.

She noted that Rizal was a great advocate of the Filipino language, who believed that Filipinos would not be a nation without a national language.

She emphasized the importance of teaching second-generation and third-generation Filipinos in Italy the Philippine language, history and culture.

Angono, hometown of National Artist Carlos “Botong” Francisco and other noted visual artists, has been called “the Art Capital of the Philippines.”

Milan, Italy’s business capital, hosts the biggest population of Filipino migrants; it is followed by Rome.

Aside from Milan and Rome, they are concentrated in major cities such as Florence, Bologna, Venice and Turin.

Still others can be found in Naples and even Sardinia.

With the inauguration in Milan and Rome, as well as that of Brunei that took place Nov. 28, there are now 24 Sentro Rizal branches overseas, according to Maria Shaina Santiago, NCCA cultural officer.

The NCCA has likewise approved the applications of the Philippine embassies in New Delhi in India and Amman in Jordan to open their own centers, added Santiago.