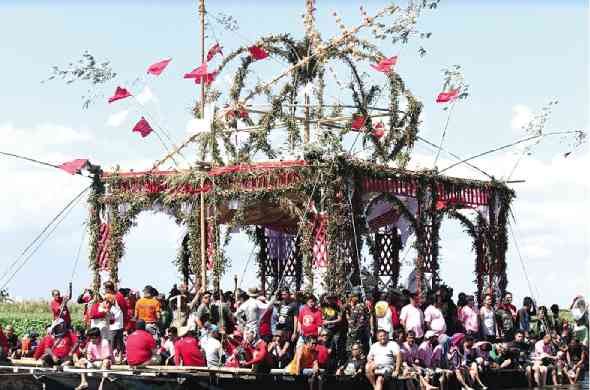 Angono pagoda: A marriage of folk tradition and Catholicism

Every Nov. 23, the town of Angono in Rizal celebrates its fiesta in honor of San Clemente, highlighted by a fluvial parade centered on a pagoda that courses through Laguna de Bay.

The pagoda tradition of Angono—as with that of Bocaue in Bulacan and Apalit in Pampanga—is a ritual associated with saints. According to the late anthropologist F. Landa Jocano, it is anchored in the Filipino folk religious practice and beliefs, particularly the rural practices associated with the people’s way of life.

In his article “Filipino Catholicism: A Case Study in Religious Change,” published in the Asian Studies journal of University of the Philippines in 1967, Jocano said people living in the rural areas were not just after following steps in planting or fishing in performing these rites.

The rites are their ways of understanding or dealing with supernatural beings and natural events. There are laws governing the destiny of people of which they are aware of. These religious celebrations are done to appease the supernatural and avoid bad luck in fishing.

“These laws are executed by supernatural beings, in the persons of saints and environmental spirits, who prescribe the rigid performance of rites and the observance of natural phenomena through which they make manifest their desires,” Jocano explained.

He further said, “To a certain extent, the environmental spirits have been replaced by saints, and the indigenous prayers, by the Christian prayers but the underlying concepts remain intact in that the imperatives of local beliefs and practices still provide the people with proper ritual contexture of economic propositions in seeking the goodwill and assistance of the supernatural.”

An account by a journalist in the 1950s, as noted by Jocano, described the Angono pagoda celebration as having a band on board playing continuous music and women praying while fishermen scrambled up from their bancas onto the pagoda, “only to be tossed playfully back to the water.”

The faces of most of these men were painted with rice paste and lipstick and they were given bread and wine by women on the bancas that formed part of the flotilla.

The use of lipstick by men is still being done although only by a handful, while the musicians are now playing on a different boat. A paampaw or solicitation is also being carried out to those on board the pagoda.

The other practices observed six decades ago no longer exist while the lively “joust” has been replaced with basaan or wetting amongst participants on board their respective bancas with the use of any dipper available.

This yearly town celebration, rooted in precolonial indigenous tradition, has changed over the past decades, but the people’s faith, thanksgiving, and merrymaking continue. —CONTRIBUTED