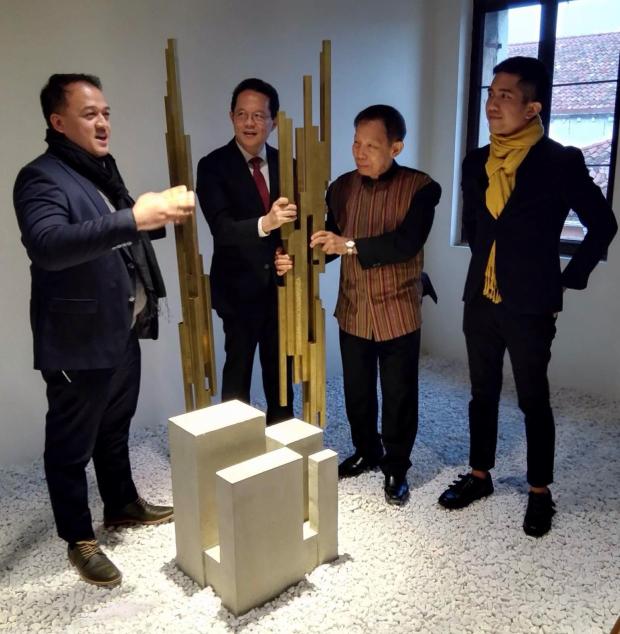 The finissage or closing ceremony of the 15th Venice Architecture Biennale in late November was a momentous and bittersweet one. It was the first time for the Philippines to participate in this particular exhibit and only the third time the country had joined the Venice Biennale.

At the Philippine Pavilion, two of the three curators – Sudarshan Khadka Jr. and Juan Paolo de la Cruz – were joined by Felipe de Leon Jr., chairperson of the National Commission for Culture and the Arts (NCCA), and Domingo Nolasco, Philippine ambassador to Italy, in the symbolic dismantling of one of the exhibits.

“Muhon: Traces of an Adolescent City,” which was housed in three rooms in the 18th century Palazzo Mora, featured the works of six architects/cultural teams and three contemporary visual artists.

Curators Leandro Y. Locsin Jr., Khadka, and De la Cruz of Leandro V. Locsin Partners (LVLP) selected the nine after they had presented their interpretations of their chosen “muhon” (or marker) in History (the past), Modernity (the present) and Conjecture (the future).

The nine participants and their subjects were:

“The resulting works showed what Manila was like before, what it is now, and what it could be in the future,” Khadka said. “If Rome has the Pantheon and the Colosseum, Old Manila also had its own sense of identity. You could see this in the articulation of the windows of the houses, and our strong connection to the Pasig River and its bridges but then this was all leveled by the war.”

“Well-defined forms and of sacred national shrines and monuments can be effective instruments for unifying our people and enhancing the sense of nationhood,” he said.

In the years that followed World War II, new buildings were constructed one after the other, some even simultaneously.

“From the ashes, in the last 60 years or so, we have created so much,” Khadka said. “Now, Manila is considered a mega city and one of the densest cities in the world.”

However, even with the frenetic pace of building that followed after the war, we were also tearing down structures as quickly as we built them.

“This rapid sense of change – destruction, creation and destruction – is a cycle that prohibits us from understanding what our built environment means to us because we haven’t had the time to understand its value,” Khadka said.

He then related this general unease to that of an adolescent trying to find his or her identity in a changing world.

“We felt the need to ask this really strong question: Are we demolishing our buildings before we’ve had the time to fall in love with them?” he added. “We felt it was timely to do this experiment for the Biennale where we appropriated the metaphor of a muhon. These markers of space and time are also markers of our own identity.”

The country’s return to the Venice Biennale was initiated and spearheaded by Sen. Loren Legarda.

In 2015, the Philippines returned to the Venice Art Biennale after a 51-year hiatus with “Tie a String Around the World.” For that exhibit, curator Patrick Flores came up with the theme that dealt with “world-making and the formation of empires.”

The featured works then were by Manuel Conde, Carlos “Botong” Francisco, Manny Montelibano and Jose Tence Ruiz, with performances by artist David Medalla.

“Muhon has started a dialogue that allows us to ponder on the realities that surround us, particularly on our built heritage, and to shape our personal narrative as a community,” Legarda said.

In an earlier statement, Legarda described the act of building as “not only about creating new structures all the time. It is also about realizing communities and connecting the present with the past.”

The exhibit “Muhon: Traces of an Adolescent City” may have ended on Nov. 27 after a six-month run in Venice, but there are plans to restage it in different parts of the Philippines next year so that more Filipinos can see and hopefully learn from it.

“Tie a String Around the World,” which was first shown at last year’s Venice Art Biennale, will have its homecoming exhibit from Dec. 9 to Feb. 18, 2017 at the Vargas Museum at the University of the Philippines in Diliman, Quezon City.

The exhibit was made possible by the NCCA, the Department of Foreign Affairs and the office of Sen. Loren Legarda.