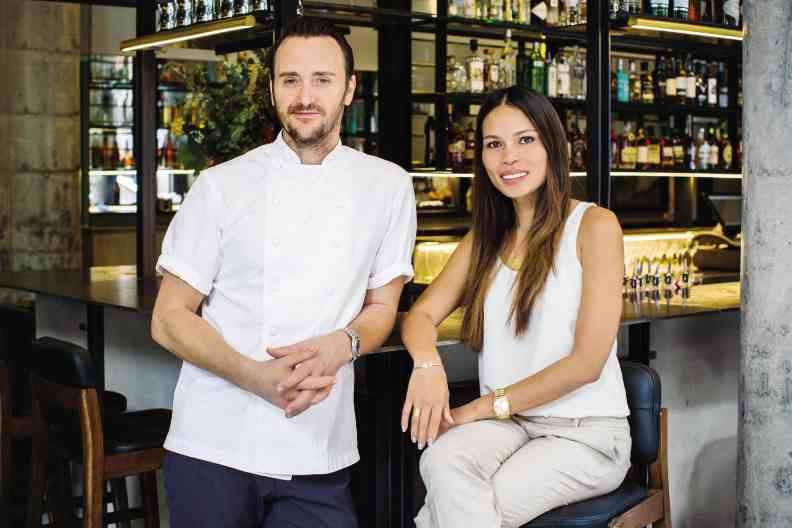 After an event at The Pig & Palm, a global restaurant specializing in light but sophisticated meals with innovative cocktails, Michelin-star British chef Jason Atherton had lunch at one of his favorite dining spots in Cebu.

Laguna Garden Café at Ayala Terraces is one of the most successful restaurant chains in the Visayas, specializing in hearty Filipino cuisine. That afternoon, Atherton enjoyed bistek and lumpia with white rice.

Whenever he and his Cebuana wife Irha are in town, they’d invariably visit Laguna Garden Café. Jason would order his favorite lechon kawali, chicken adobo, kare-kare and crispy crablets.

Jason once told Irha that he could tell if the restaurant’s chef is a veteran: The dishes are cooked with soul. They learned that the chef had more than 20 years of work experience.

However, for Jason, hospitality is just as important as the food. For seven years, he was always solicitously served by a waiter named Fredo.

While The Pig & Palm was preparing for the opening, Jason and family were house guests of philanthropist and developer Mariquita Yeung. Her daughter, Carla, and British son-in-law, Chris McKowen, who works for the Yeung family, are Jason’s local partners.

The Pig & Palm is the 16th restaurant in Jason’s global empire. The interiors were rendered by Shanghai-based Filipino designer Lyndon Neri. The menu offers the chain’s most popular dishes as well as nods to local cuisine such as its kinilaw, crispy lechon with applesauce, and coconut rice pudding with mangoes on a fresh shell.

Irha pointed out that Jason tries to be all-inclusive in the menu, with gluten-free and vegan dishes also offered. An appetizer, the simple pan con tomate, is heavenly with its crispy rye bred and juicy tomato topping. Then there’s crispy broad beans and fresh green peas with subtle lemon vinaigrette.

The crunchy, organic, char-grilled carrots are sweetened with miso and walnut pesto sauce, and complemented by a  smoky aubergine dip. If a vegetarian orders in advance, The Pig & Palm can concoct grilled vegetables with fluffy fruit purées.

In Britain, the celebrity chef is widely written about. Growing up in the coastal town of Skegness, the young Jason got odd jobs to contribute to the family income. Working in a local hotel, he discovered his culinary talents, which brought him to top restaurants in London and France.

In Spain, the famous Ferran Adria of El Bulli took him in. In 2001, he worked for celebrity chef Gordon Ramsay. Jason then became the head chef in Verre at Hilton Dubai Creek.

There he met the exotic Irha Almodiel, who was the restaurant’s receptionist. Previously, she had worked for a Cebu radio station after studying accountancy at the University of San Carlos.

When Hilton held a job market in Cebu, she landed a job in Dubai.

Jason kept inviting her on a date, but Irha always turned him down. “I had a boyfriend and he had a girlfriend. It took some time before we both became free. Jason was persistent,” recalled Irha.

She finally relented, on condition that she would bring a chaperone, a Filipino kitchen trainee who was their go-between. Their first date was at a bar where the chaperone sat at another table.

On their second date, Jason wanted to impress Irha by taking her to the seafood restaurant in Burj Al-Arab. She recalled her awkward moment when she didn’t know how to use the knives and forks.

“I came from a humble family, and Cebu didn’t have this kind of fancy restaurant,” Irha said. “It was like a scene from ‘Pretty Woman.’”

He put her at ease with his gentleness. Over dinner, Irha revealed her grief over her father’s demise. The conversation paved the way for Jason and Irha to become closer.

One day, when she was going to the airport to fly to Cebu for a holiday, Irha sent a text message to Jason, referring to him in jest as “my future husband.” He immediately rang her up and asked if she sincerely wanted to marry him.

After her Philippine sojourn, Jason picked up Irha from the airport and brought her home. He nervously brought out the ring but didn’t know where to place it.

“He called his sister to ask where to put the engagement ring,” said Irha.

In 2004 the couple had a civil wedding in Dubai, followed by a church wedding in Jason’s hometown in Skegness.

From chef to CEO

In 2005, he went to London to open Gordon Ramsay’s Maze in posh Mayfair, which he turned into a Michelin-star restaurant.

After nine years, Jason left the Ramsay Restaurants. The much publicized falling out was attributed largely to Ramsay’s father-in-law, the then chief executive Chris Hutcheson. He promised Jason profit sharing, but didn’t deliver.

Still, Jason has only good things to say about Ramsay: “Gordon may seem mean on TV, but he’s the opposite in real life. He’s very sweet.”

The breakaway became an opportunity for Jason to establish his holding company, Social Network, and its restaurants. The British press covered his dramatic rise. His flagship establishments, Pollen Street Social and City Social, each merited a Michelin star on their first year.

“He’s a Virgo like Gordon. It is a good sign for a chef—a perfectionist, a stickler for cleanliness, detail oriented,” said Irha.

As Social Network’s codirector, Irha oversees the departments. She credits the company’s success to hiring the best talents and keeping an eye on the bottom line.

Irha is indispensable to Jason when he visits his restaurants in China, Australia, Hong Kong, Dubai and the United States. “That’s our deal. When I travel with him, he feels family and comfort. Our daughters—Jeziah, 11, and Jemimah, 5—are growing up and there is a full-time nanny. We try not to be away from them for more than five days,” said Irha.

Married for 12 years now, they try to keep a normal family life. Notwithstanding his fame, Jason strikes a balance between work and family. At home, he cooks Filipino dishes, and even shared his chicken adobo recipe to The Guardian.

But Irha insists her adobo version is tastier, and advises him on the kind of food that will appeal to the Cebuano market.

Jason Atherton has become Cebu’s adopted son. With a house under construction on a hillside, he and Irha are calling Cebu their real home.  —CONTRIBUTED