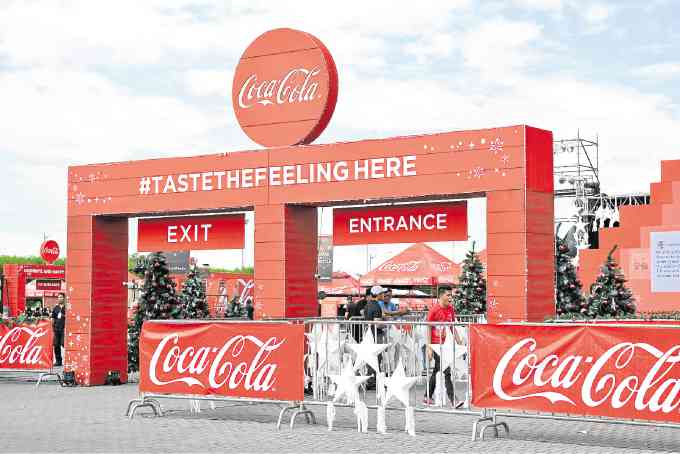 The public event started with a bang as Filipinos at the concert grounds took the opportunity to dedicate this festive occasion to the “unsung heroes,” everyday heroes who make sure that Christmas happens for everyone.

Guests got the chance to see some of the country’s hottest stars and Ambassadors of Coca-Cola, such as Nadine Lustre, James Reid, Bailey May, Ylona Garcia and Enchong Dee, along with OPM legends Rico Blanco, Gloc-9, Callalily and Sandwich.

Celebrities Diego Loyzaga and Alexa Ilacad and singing sensations Darren Espanto and the boys of Gimme 5 also graced the event.

Visitors enjoyed on-ground activities such as the Coke karaoke booths, Coke tattoo booths, the 5by20 Women Artisan booth, and the Coca-Cola Santa and Snow Land stations where they took pictures and played with  snow.

The company will also extend its Christmas spirit to everyday heroes who work in gas stations, MRT and LRT stations, fast-food chains, grocery stores, malls and airports by surprising them with Coca-Cola goodies for themselves and their families.

“This Christmas, Coca-Cola wants to put the spotlight on the people who makes us feel the magic of Christmas, #TagahatidPasko or  ‘bringers of Christmas,’” said Coca-Cola Philippines vice president for marketing Stephan Czypionka.

“We want to inspire people to show their appreciation. After all, the true spirit of Christmas is taking a moment to express gratitude.”

Coca-Cola continues to make the Christmas spirit even more special with all the exciting activities this December.