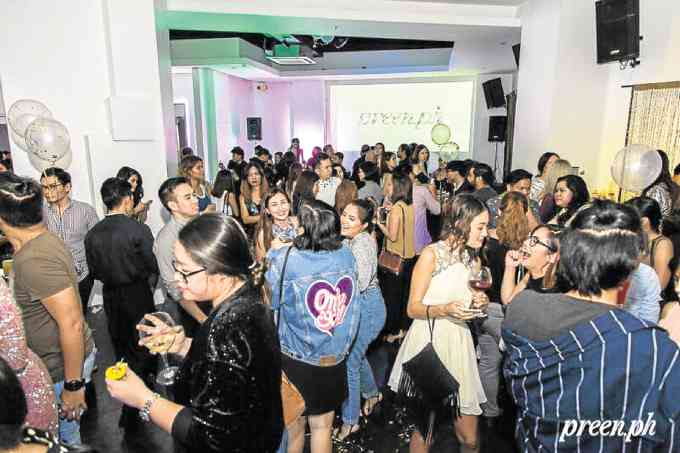 It was a night filled with cupcakes, cocktails and confetti. And true enough, we lived up to our theme. The venue, POP at BGC, was dressed up in metallic fringe, with pink and silver confetti all over.

We also had a dedicated dessert bar by Cupcakes by Sonja stocked with emoji cupcakes, sugar cookies, cake pops and a rainbow cake that was wiped out by the end of the night.

#CheersPreen brought together celebrities, personalities, and different newsmakers. Kaila Estrada, Meryll Soriano, and Melvin Mojica danced their hearts out to the beats of DJ Xtina Superstar and DJ Jujin Samonte. Current favorite tracks by Ariana Grande were mixed in with classic ’90s faves from Mariah, Britney and Backstreet Boys. At one point, we overheard someone going, “Is that Ace of Base?”

Rica Peralejo-Bonifacio, ’90s TV-movie star and now mom blogger, made an appearance. On her Instagram, she wrote, “Another highlight at #CheersPreen was this: Someone took a picture with me because she used to watch ‘Ang TV.’ So I told her, in this sea of millennials, ‘Can we just keep that to ourselves? Parang they don’t know that anymore.’”

That someone turned out to be Hinge Inquirer group publisher Bea Ledesma, who posted online her photo with Peralejo the next day.

There was a long queue in the selfie room outfitted with three mirrors, a bright neon light inscribed with @preenonline and tons of silver fringe.

Some of the people we spotted in line and who eventually took tons of photos were Tricia Centenera, Janeena Chan, Chi and Gabs Gibbs, as well as Camey Flores and Tess Burton.

Photographers Ryan and Garovs Vergara of Everywhere We Shoot, Sara Black, Mark Nicdao, and Shaira Luna took some selfies, too, and were quick to post them online.

Another favorite spot that night was the hallway lined with gold fringe leading up to the wine bar, and the neon sign we can all relate to: I shop, therefore, I am.

“This is the most fun party,” Jujiin Samonte said, as people filled the dance floor and partied like mad, throwing confetti in the air as they sang along to Mariah Carey’s holiday hit “All I Want for Christmas is You.”

We can’t wait to see what the next year will bring for Preen.ph and we look forward to partying with you again!

The anniversary party was made possible by Shopee with support from Dermclinic, [email protected], Manny O and Cupcakes by Sonja. Preen.ph is a lifestyle website for women, featuring fashion, beauty, food, health and culture, powered by Hinge Inquirer Publications.  —CONTRIBUTED, WITH REPORTS FROM OLIVIA ESTRADA