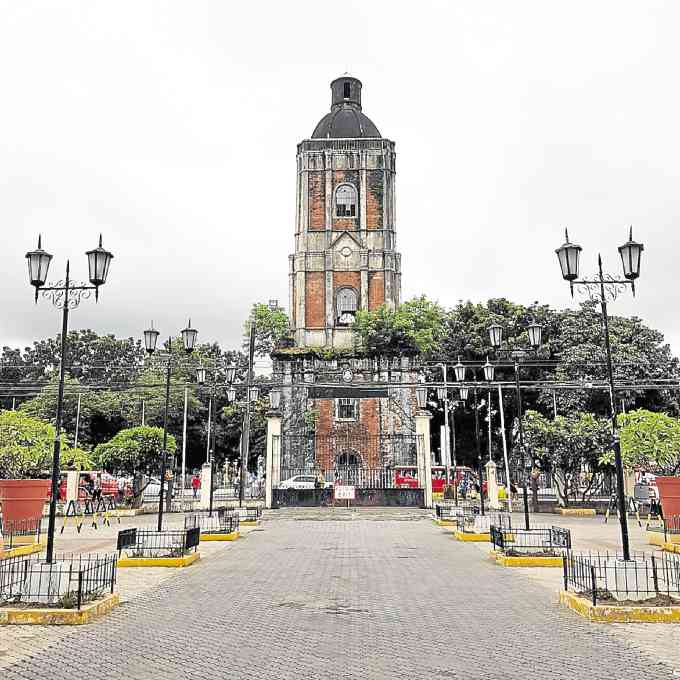 SENTRY An ancient watchtower in Jaro Plaza, Iloilo province, which locals used to look out forMoro pirates who raided the coasts of Iloilo in Spanish colonial times. —PHOTOS BY FELICIANO RODRIGUEZ III

Visiting Iloilo for the first time allowed us to see an old, historic province that has transformed into an urbanized place bustling with development.

The new Iloilo Business Park is a prime example.

But to complete our experience, we toured the old Iloilo and sampled its native delicacies.

The towns of Jaro, Molo and La Paz still abound with the genteel mansions of Iloilo’s elite—a mute testament to the glorious past of the province.

Most of the houses are well-preserved, but some are neglected, filled with grime and foliage.

The Molo Mansion is now a Filipiniana-theme gift shop. The Ledesma Mansion across the Jaro Plaza is a showcase of mixed Romanesque and American colonial architecture.

After a day of walking and sightseeing, we stayed at the new Seda Atria, a hotel in Ayala Land’s Atria Park District in Mandurriao, Iloilo.

The hotel, 20 minutes from the Iloilo International Airport, used to be part of a sugar plantation.  It sits beside a rotunda where an old chimney from a muscovado mill still stands.

The entire property is being developed to include office buildings, condominiums, restaurants and cinemas.

Seda Atria is as well-equipped as Seda Bonifacio Global City in Taguig: similar comfy beds in a spacious room; free (and fast) Wi-Fi; and excellent service.

The Shops at Atria beside the hotel is where you’ll find a branch of Netong’s La Paz Batchoy, whose original outlet still operates at the La Paz Public Market.

After having sampled the cuisine of Pampanga, Cavite, Batangas, Lake Sebu, South Cotobato and General Santos City, we found the food in Iloilo quite fascinating.

“We love eating, it’s in our genes, our blood, our land,” said Erlyn Alunan, a veteran tour guide in Iloilo.

She pointed out that Iloilo was the original Queen City of the South, once the crown jewel of the old Spanish gentry in the country.

On the airy second floor, guests are transported to the Spanish colonial period while sipping tsokolate de batirol in small, dainty cups. The experience was fun and educational.

Our final stop was Breakthrough Restaurant in Villa Arevalo, Iloilo City. It is known for its seafood dishes and al fresco setting, which offers an intoxicating view of Guimaras Island.

They were sweet, with just a bit of tartness.

Before heading back to Manila, we visited Iloilo’s Original Biscocho Haus, which boasts freshly made pinasugbo, butterscotch, and the famous barquillos.