The grub up north-Metro Manila, that is | Inquirer Lifestyle ❮ ❯

The grub up north-Metro Manila, that is

People of the North rejoice! The foodie hotspots keep shifting on Metro Manila’s map, and they finally found their way to the open, empty spaces of Quezon City’s Fairview (or Far-view, as most people call it).

Back then, the foodie capital was Kapitolyo in Pasig, until residential Maginhawa Street in Quezon City evolved into a gastronomic strip offering international flavors.

Fairview was among the more suburban parts of the largest metro city that had long been cut off from the more cosmopolitan and innovative taste bud offerings. But now, a single jeep ride is all it takes for its residents (and other QC folk) to become instant gourmands (or food comma victims).

StrEAT of the Maginhawa food park fame has set up another branch along the North Fairview end of Commonwealth Avenue.

Although it’s under the same brand, Commonwealth StrEAT boasts a different set of food stalls and trucks from its Maginhawa counterpart. There are some familiar treats, but most are unique finds that you can find only at this far-off food spot.

The Mexi-grill has the perfect appetizers if you’re feeling less adventurous on your trip to StrEAT. Their regular nachos are topped with ground beef, sour cream and salsa (which tastes kind of like fancy ketchup). The quesadilla isn’t as thick as we would’ve wanted, but is still a bang for the buck with its stringy cheese and flavorful meat. 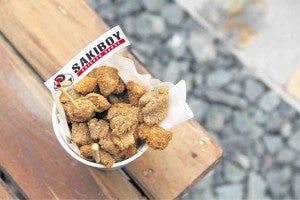 We just can’t stop gorging on their chicken shots. These addicting, deep-fried, popcorn-size chicken tenders are dusted with different flavors, like barbecue, cheese and sour cream. They even come with a variety of dips (gravy, mayo, spicy mayo or ketchup). Sakiboy also serves flavored chicken wings and fillets in butter, soy garlic and buffalo flavors. 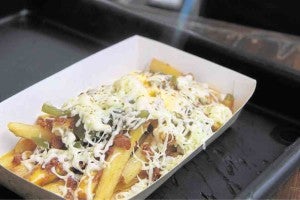 You can never go wrong with fries, bacon bits and mozzarella cheese. We ordered The Fry Guys’ bestseller, Torched Fries. The mozzarella was melted right in front of us as soon as the platter of chunky potato slivers was served. Adding jalapeño to our order, though, was a totally wrong move. It had such an overpowering flavor that made the other ingredients pale in comparison. (Sayang!) 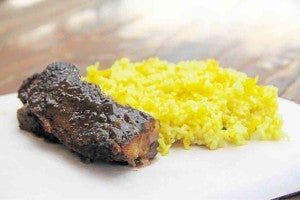 We expected the meat to be sensational as they told us that it was smoked for four hours. Alas, the Smoke Riblet’s actual taste was a bit of a disappointment. We almost wished that its barbecue glaze (which was really good) seeped into the actual meat. On the plus side, the meat was so tender it practically fell off the bone. If you don’t believe us, try eating it with provided plastic utensils. 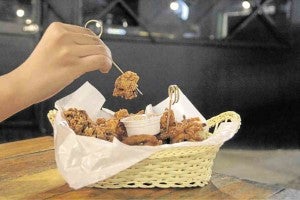 The stall claims to bring in flavors straight from Gangnam. We gave their basket of soy chicken nuggets (nope, not the fast-food kind) with onion rings a try. The batter that coated the chicken pops and onion rings was glazed with the Korean signature sweet-and-salty blend. The entire order was both filling and satisfying. 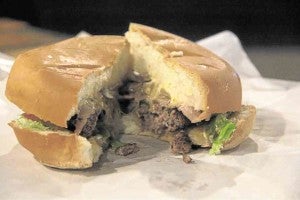 The Moo Moo burger doesn’t have that much of an appeal appearance-wise—it almost seems unappetizing. But don’t let its look discourage you. It has a flavorful patty combined with a creamy, mushroom, melted-cheese sauce. However, we’re deducting points for the bland bacon. 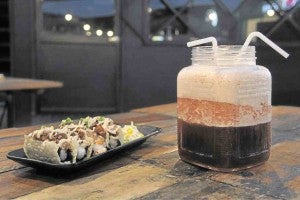 Their Noritako is a different take on your usual sushi roll. A crispy, wafer-thin taco shell is followed by nori and sushi rice, topped with a choice of crunchy karaage (chicken) or beef tenderloin steak, julienned carrots and drizzled with Japanese mayo.

Don’t bother using the chopsticks that came with it. Instead, put your hands to good use. Its generous meat and chewy Japanese rice will more than make up for the messiness. Make sure you wash it down with their raspberry iced tea slush that’s big enough to share. 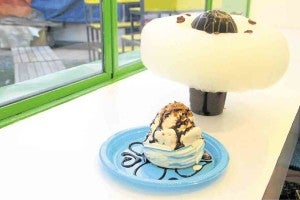 Hue Café has a whimsical take on desserts. Bird’s Nest has an interesting plating as a meringue bowl held a single scoop of vanilla ice cream—and it’s not an ordinary cold treat—rich and thick, like it were that fancy Madagascar vanilla ice cream (It was legit!). The extra crunch of the meringue with the sweetness is the very definition of “foodgasm.”

Dark Saturn Mad Frappe’s visual alone will make you think of galactic sculptures  in museums. It is covered by a gigantic cloud of cotton candy and topped by a dome made of Belgian chocolate. To further play up the planetary theme, star-shaped cereals were placed on the cotton candy, like orbiting celestial bodies. The drink is more of an ice-blended treat than the ice-cream-based milkshake of your childhood. 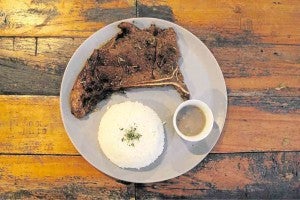 A little thin for your typical steak, but their T-bone offering is fair for the price. The meat is tender (although becomes a bit tough along the fat trimmings). You have the option of choosing between the classic and rosemary recipes. It comes with buttery gravy that you’d love to drown your whole meal in.

Their best-selling all-meat pizza lacked the herbed savory taste of a tomato-based sauce. It has a generous mixture of cheese and different kinds of Italian meat in a handmade artisanal crust. 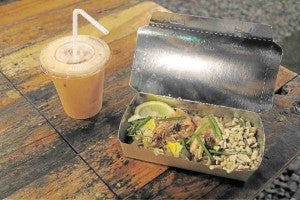 This food truck kitchen has sweeter-than-usual Thai creations. Although the classic Pad Thai leans on the sweet side, if you’re into spicy delicacies, it has a hot peppery kick you’ll love even if you go for the mild spiciness option.

The Thai premium milk tea has a difficult taste to replicate and find locally, but their version is close to the ones you’ll find in random Bangkok streets—although their concoction seems to have more condensed milk. 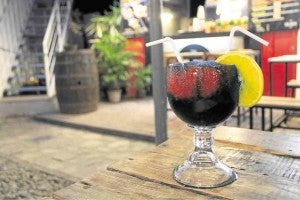 Welcome to your neighborhood watering hole. Cap your barkada night at StrEAT with their wide selection of local beers (which you can also take home), Beergerita (different flavored frozen margaritas served with an upside-down bottle of Smule or beer in the large goblet) or a fishbowl cocktail of spiced and white rum with slices of strawberry and lemon called Storm Trooper.

Then munch on Cheesy Meat Onion Rings and Time Bombs (aka the street favorite “dynamite,” jalapeño stuffed with cheese) as you try to keep sober. The newest addition to the StrEAT lineup promises you the world—at least, a taste of it. The champ among their gourmet hotdogs is still undoubtedly the classic Coney Island Chili Dog with the tried-and-tested combination of homemade chili (add more chili to your servings, please!), cheese, jalapeño, onions and sour cream.

For Japanese cuisine fans, give Wagamama a chance. Schimdt’s hotdogs have a slight smoky taste while their buns are tasty and soft. (Super tip: You can actually inform them if you like your bread a little bit more toasted than usual.)