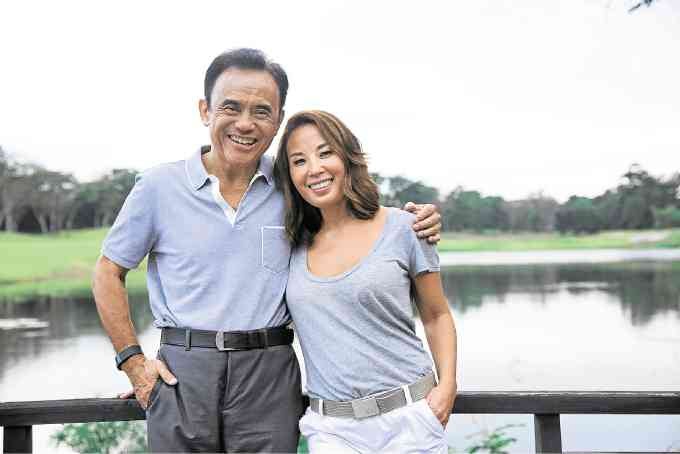 Katrina Tantoco-Lobregat volunteered to write her own job description as vice president for marketing and sales of Sta. Elena Golf and Country Club shortly after her father Bienvenido “Rico” Tantoco Jr. gave her the job.

“Just do what you need to do,” was all her dad told her.

“He’s so trusting and understanding, (but) I needed more structure in a way,” said Lobregat. “I needed him to know what I think my job required of me… I wanted us to have a more professional relationship.”

Which is not saying that Tantoco cuts his daughter a lot of slack.

He expects Lobregat to bring in to Sta. Elena the kind of dedication she has shown as buyer, designer and creative director for men and women’s fashion at Rustan’s Department Store for nearly two decades now.

“She has always been very capable,” Tantoco said. “She’s very dedicated, very thorough and pays attention to detail. I guess retailing makes you do that. You’re bound to do good work if you are like that.”

Tantoco, 71, is Sta. Elena’s executive vice president but is at the forefront of the company’s development plans. Real estate is cyclical, he pointed out. He believes the industry “has peaked and we have benefited from that upswing.”

But more needs to be done. Enter Lobregat, whose “main function” is to attract new homeowners—more of whom, Tantoco insists, would be heading south as Metro Manila’s congestion worsens. He had noticed it even during his days as a young golfer swinging away at the greens.

In 1988, Tantoco, an engineer, bought 200 hectares from the vast Yulo sugar estate in Laguna from Jose “Bebo” Yulo Quiroz. The wives of Quiroz and Tantoco are sisters.

Quiroz reportedly asked Tantoco not to make a full payment on the condition that they be partners and that part of the estate sold to Tantoco would be developed into a golf course.

Tantoco admits he and his business partners ran into difficulty when the Asian currency crisis struck in the ’90s.

A large portion of the Sta. Rosa, Laguna, area now hosts differently priced residential villages as well as malls and other commercial establishments.

Sta. Elena, right about the next exit from the South Super Highway, developed more quietly, marketing itself as a premium residential destination that is also a nature sanctuary.

Lobregat said there are now 50 homeowners and 105 lot owners. The company is mulling how to develop a still unused 50 ha within the property, according to Tantoco. A country club meant to provide facilities even for nongolfers is “being planned,” he said.

Getaways from the city

Tantoco added that the company “feels investment spending will be less” but that homeowners, especially those looking for second homes that would serve as getaways from the city, are still on the lookout for that really good spot.

“We believe high-end users would still want a home here in the future. We think that would be the trend. This would happen over time. Some homeowners here might even have homes in Calatagan, Tagaytay or Punta Fuego, but it takes time to get to those areas. The beauty of Sta. Elena is that it doesn’t take two hours to get here, as long as you don’t go (during the rush hour traffic). You can get here in 25 minutes,” he said.

Not long ago, Lobregat gathered all of Sta. Elena’s executives in a strategic planning workshop where Tantoco was asked to share his mission-vision for the company.

“I think it’s a good thing my dad is conservative and very cautious. We (younger officers) are probably the ones who push a bit of the risk… The reason I am confident is, when you listen to his vision, you feel it here,” she said as she motioned to her chest.

Tantoco said he wants his daughter to apply the creative side she has shown in her work at Rustan’s to Sta. Elena.

Lobregat welcomes the challenge. “Both require a lot of analytical work. At Rustan’s, I’m the creative director. The creative office is tasked not just to perform a creative function but also to look deeply into our customer segment, know their aspirations.”

The same skill would be promising if applied to her role in Sta. Elena, she said. “Focus on the customer. The market we are trying to attract is also the same market (that enjoys Rustan’s).”

Lobregat is grateful that dad is not a boss who “barks out directions. He’s the kind of leader who gets you to think and work independently.”

Do they talk shop at family gatherings? “We try not to, but I guess that’s part of the dynamics of working together (in a family),” she said.

It all boils down to knowing there is a boundary between personal and professional ties.  “It’s not easy,” Lobregat noted. But part of the Tantocos’ culture and training is discerning that boundary.

“There’s so much to take away from his wisdom. I feel like he’s always ahead of his time. Working for my dad, you really have to sit and observe.  Sometimes it’s a challenge because (I) need guidance, but one of his values is freedom of choice, which is also a good thing,” said Lobregat.