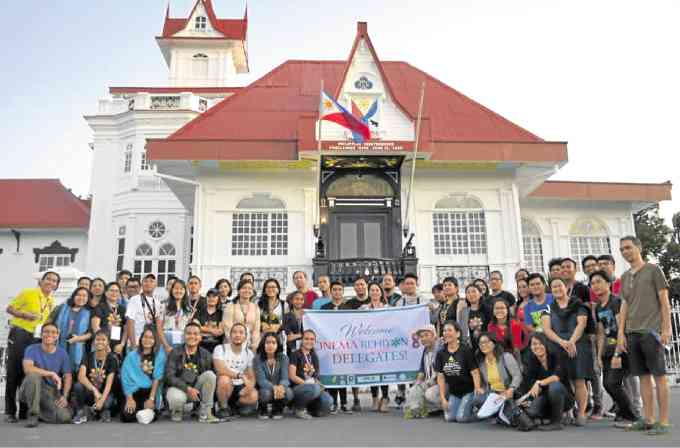 Delegates in front of the Aguinaldo Shrine in Kawit—PHOTOS BY EDGARALLANM. SEMBRANO

Organized by the National Commission for Culture and the Arts (NCCA) with the Film Development Council of the Philippines (FDCP), the 2016 Cinema Rehiyon was the largest edition ever, with over 100 movies shown, mostly by filmmakers outside Manila.

Contemporary movies that were presented included the award-winning “Bambanti” (2015) by Zig Dulay; “Ari: My Life with a King” (2015) by Carlu Catu; and “Women of the Weeping River” (2016) by Sheron Dayoc.

The highlight was the showing of “The Moises Padilla Story” by National Artist for Cinema Gerardo de Leon and “Hulihin si Tiagong Akyat” by Armando Herrera.

The movies were shown as a tribute to Caviteño actors Leopoldo Salcedo and Ramon Revilla Sr. who respectively played the lead roles in the 1961 and 1972 movies.

Revilla Sr., who became a senator, also directed a number of films such as “Bergado: Terror ng Cavite” (1976) and “Boy Imus: Anak ni Tiagong Akyat” (1978), under the pseudonym Jose Yandoc.

NCCA National Committee on Cinema vice head Teddy Co said Cinema Rehiyon honored the Cavite actors who made a big contribution to the country’s film industry as a way of paying tribute also to regional cinema.

Co said he saw a bright future for regional films. He explained the movies had come from new voices from the Cordillera, Bicol Region, Bacolod, Iloilo, and even Mindanao such as Davao, Zamboanga and Nabunturan in Compostela Valley.

Dulay stressed the need for regional films to expand its audience and cater to consumers of “regular movies.”

Dulay said he believed labels would eventually vanish—such as “indie” or “mainstream.” He added he hoped to see genres blur.

Hosting a gala night during the third day of the five-day event, FDCP chair Liza Diño said it was an honor for her agency to be part of the advocacy of Cinema Rehiyon in involving the regions in celebrating cinema and Filipino culture.

Diño, who underscored the importance of film in revitalizing culture, disclosed in an interview that FDCP had recently approved its festival development assistance program which would support filmmakers around the country.

The 2016 Cinema Rehiyon was mounted with the support of University of the Philippines-Los Baños (UPLB) Foundation Inc. and UPLB Pelikulab. —CONTRIBUTED