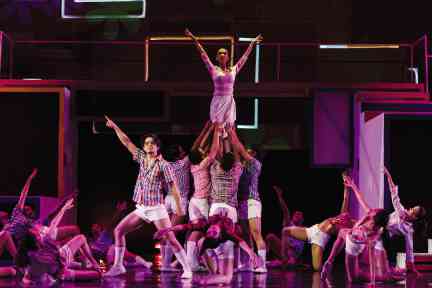 In a bid to draw the non-theater-going crowd to the theater, Ballet Philippines scored a coup with the pop-culture musical based on the revival of songs from the disco-era pop group VST& Company.

“Awitin Mo at Isasayaw Ko” was based the VST & Company’s hit song which warbled on eternal devotion and compared love to a two-way street.

The Culture Center of the Philippines attracted baby boomers and Gen-Xers who wanted to relive the disco days of their youth. Growing up in the ’70s, we dismissed the sappy lyrics of the VST &Company and viewed them as an imitation of the Bee Gees. But with updated musical arrangements interpreted by the ABS-CBN Philharmonic Orchestra, their songs sounded fresh. We realize that VST & Company had adopted the foreign influences and made them into their own.

The dance musical was about star-crossed lovers Victor, a construction worker, who fell in love with a well-to-do student activist, Teresa. It began with a dying Victor in the hospital room, pining for his lost love, Teresa. Meanwhile, Teresa was suffering from terminal cancer in another hospital room.

Flashback to the late ’70s when Teresa met Victor. They eloped and lived in the squatters. Meanwhile Gabby, a handsome political scion, had been trying to win over Teresa. When the Metrocom go on a witch hunt for activists, Gabby set up Victor. Gabby married Teresa and took care of her until her death. The older Victor and Teresa were finally united in the after life, dancing disco together.

Indeed, the revival of the VST & Company’s music exhilarated the audience. We would have enjoyed the dance musical more if there was attention to detail in delivering the narrative.

With three choreographers—James Laforteza, PJ Rebullida and Carissa Adea —working on the musical, the scenes didn’t have seamless continuity. The dances were bereft of logic, plot development and character motivation. We overheard members of the audience asking questions about the narrative.

The Metrocom raid scene was devoid of dramatic tension. Toward the end of the musical, there was no difference between the youthful energy of the high school dance in 1977 and the supposedly aging alumni in their grand reunion.

There were so many things going onstage that the audience didn’t know where to focus. John Batalla’s lighting failed to highlight important elements of the story.

Designer James Reyes made the most of the budget for a big cast by searching for clothes in the ukay-ukay that would get the feel of the VST & Company’s videos and created cheeky tributes of the ‘70s fashion. But the costumes would have had more impact if the dancers wore the period hairstyles.

Still, the show was worth watching.

Former BP stars Nonoy Froilan and wife Edna Vida, who played the older Victor and Teresa, commanded the stage with their presence and expressive solos.

As Gabby, Jef Flores oozed with sensuality and made a suave antagonist. Belter Cooky Chua as Ester was a foil to the simple, straightforward style of Sandino Martin as Arturo. Noel Comia Jr. was a lovable Lito with a powerful voice. BP soloist Garry Corpuz may not fit society’s idea of a leading man. As Victor, he carried the whole dance with sincerity and raw energy.

BP should be commended for pushing the envelope. Let’s hope there will be more choreographies showing off the prodigious talents of its dancers. —CONTRIBUTED