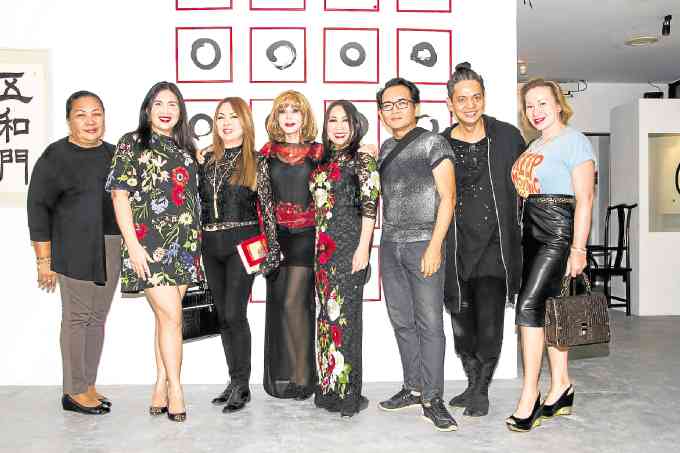 A scroll painted with an “enso,” a circle of black ink around a pure white center, is flanked by two parallel mirrors at a corner of the gallery.

Cebuano fashion designer/ artist Oj Hofer asks the viewer: “What do you see?”

At first glance, one merely views the reflection of the circle on the mirror. From another angle, the viewer sees a series of smaller reflections that seem to be drawn into an endless tunnel of mirrors.

This classic optical illusion of parallel mirrors is Hofer’s take on the meaning of enso—the Infinity Circle, a sacred symbol of perfection and nothingness in Zen.

Hofer, a Buddhist, uses calligraphy, the art of meaningful gesture, as a means of enlightening the public. “I want to give the audience a feeling of calm, harmony and peace while they are viewing the works. I went into meditation before doing each piece. Hence, each stroke is also meditation in motion,” he explains.

A graduate of Fine Arts and Clothing Technology at the University of the Philippines, Hofer has been dressing up the fashion-forward women of Cebu. As a spiritual seeker, he converted to Buddhism and has since related arts to its philosophy such as tai chi and ikebana.

A highlight of his life is flying to Taiwan to take Bodhisattva Vows which uphold respect for life and purity.

Hofer studied at the Nihon Shuji, a Japanese society in Cebu that teaches calligraphy. He happens to be the only certified Filipino teacher at Nihon Shuji.

He points out that the Chinese brought Buddhism and calligraphy to Japan in the 7th century. The Japanese scribes copied the Buddhist text in the formal and compact manner of the Chinese, until they evolved with their own unique style.

Inspired by a book

“Empty Line, Full Heart” was inspired by a book by the Venerable Master Hsing Yun, who established a Buddhist temple in Cebu almost 40 years ago. The book, “Travel Like the Clouds and Water,” brought to light his one-stroke calligraphy.

“He says, ‘Don’t look at the calligraphy, and look at my heart.’ His calligraphy invites people to look at their own perfection.”

Hofer began working with simple but profound words of wisdom. The symbols float gracefully like tall blades of grass swaying with breeze across a clean meadow with contrasting washes of black clouds. Other scrolls feature rigid characters.

The spontaneity of his strokes invades the canvas, called the “Dancing Dots” series. These are simple calligraphic swipes borne out of the artist’s torso movements.

Hofer likens the process to dancing with the brush. He starts outlining the characters and fills them in with color to embolden them.

The most popular is the series of black-and-white paintings of Infinity Circles, with red frames. The 20 paintings were created in three months.

“When I’m off, the shapes are misshapen and fall flat. I couldn’t properly form the empty space in the middle the circles. When I meditate, my circles are softer and rounder,” says Hofer.

Aside from ink, Hofer also explores the resist method by using gold tempera paint on black waxy paper. Since the water-soluble paint can’t be easily absorbed by the waxed paper, the brush strokes leave little dents instead of smooth color, to create textures.

As homage to his guides, Hofer illustrated Venerable Masters Hsun Ying, Yung Lin and Yung Guang Yg Shih in simple pencil strokes. There was none of the folds of the robes or the realistic details of their physical attributes.

“I minimize the lines to capture their essence,” says the artist.

All told, Hofer aims to use his art for a higher purpose. “I want to awaken people who have not realized their true nature.” —CONTRIBUTED