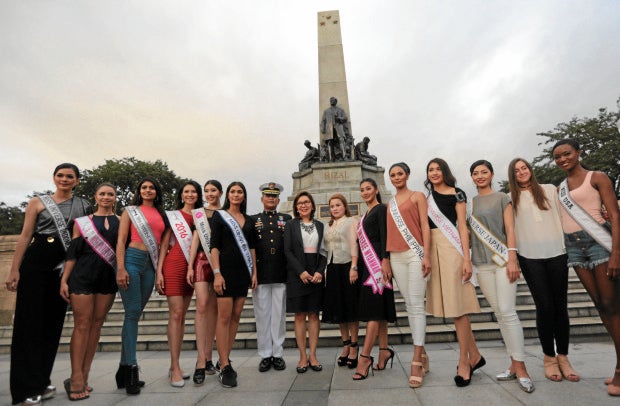 Environmentalists have lashed out at organizers of the Miss Universe beauty pageant in the Philippines, calling them “irresponsible” for letting contestants swim with endangered whale sharks.

Intermittent rains over Cebu on Tuesday did not stop bikini-clad Miss Universe candidates from Vietnam, New Zealand, Thailand, China and the Philippines from meeting gentle giants in waters off Oslob town, ahead of January’s contest.

Tourists swimming with the creatures are strongly discouraged by environmental groups, which say feeding whale sharks makes them dependent and also leaves them vulnerable to poaching or injuries from boat propellers.

Netizens and environmentalists took to social media their disappointment at the inclusion of the activity in the candidates’ itinerary during their visit, saying that the pageant was supposed to be a platform that promotes environmental protection and social awareness.

A “plea” has been circulating online asking the Miss Universe organization not to let the candidates swim with the whale sharks in Oslob.

“Miss Universe, please don’t be a bitch to the environment,” Gabriel Yap wrote on Facebook.

Concerns have been raised in the past regarding the impact of whale shark tourism on the well-being of these creatures.

“We are afraid because with Miss Universe going there, the Philippines is promoting a bad tourism practice,” Vince Cinches of Greenpeace Southeast Asia told Agence France-Presse (AFP). “We are telling the world it’s OK to do this, aggravating this kind of behavior,” he said.

The Philippines is hosting Miss Universe next month and the tourism department said the trip was part of an inspection of potential competition sites.

The whale shark visit was coordinated with the help of the municipality “which promised a well-managed marine interaction experience,” Tourism Undersecretary Katherine de Castro said.

Marine Wildlife Watch of the Philippines opposes whale shark tourism in Oslob, but local officials say the practice is a source of livelihood for the community.

“It’s irresponsible and unsustainable. It’s not even ecotourism. You sacrifice the environment just for a selfie,” said the group’s director, AA Yaptinchay.

Yaptinchay urged the government to enforce guidelines, including maintaining a 3-meter distance from the whale sharks and prohibiting swimmers from touching them.

De Castro said the decision whether to let Miss Universe candidates swim with the whale sharks would ultimately be up to pageant organizers.

“We were asked if we had any wildlife to feature. I mentioned the Philippine eagle and whale sharks,” De Castro said in a press briefing on Tuesday at Jpark Island Resort and Waterpark in Lapu-Lapu City, the venue of the pageant’s swimsuit competition on Jan. 17.

Oslob, a once sleepy town, has become known as a venue for recreation ever since whale sharks started visiting its shores and the local government took advantage of it.

De Castro said that what they did in Oslob was simply an ocular inspection and that only five candidates were present, minus the pageant production and staff.

She said there was a possibility that whale shark watching in Oslob may not be included in the final show, where all 90 candidates would be involved, due to the clamor from various groups against it.

De Castro said the Department of Tourism was determined to feature both the Philippine eagle and whale shark in the final show.

If not in Oslob, organizers may opt to do it in Donsol, Sorsogon, instead.

De Castro also emphasized that before their visit, there was a series of meetings conducted with the provincial and local government.

She said she was given assurance that the town’s whale shark encounter was more manageable now than it was before. “So, we pushed through with it. But let me emphasize that we hear your pleas,” De Castro said.

But he said the local government unit must look into a comprehensive visitor management strategy and limit the number of visitors in a day, for example, by setting a higher price. —WITH A REPORT FROM AFP