The (not at all) wimpy world of Jeff Kinney | Lifestyle.INQ ❮ ❯ 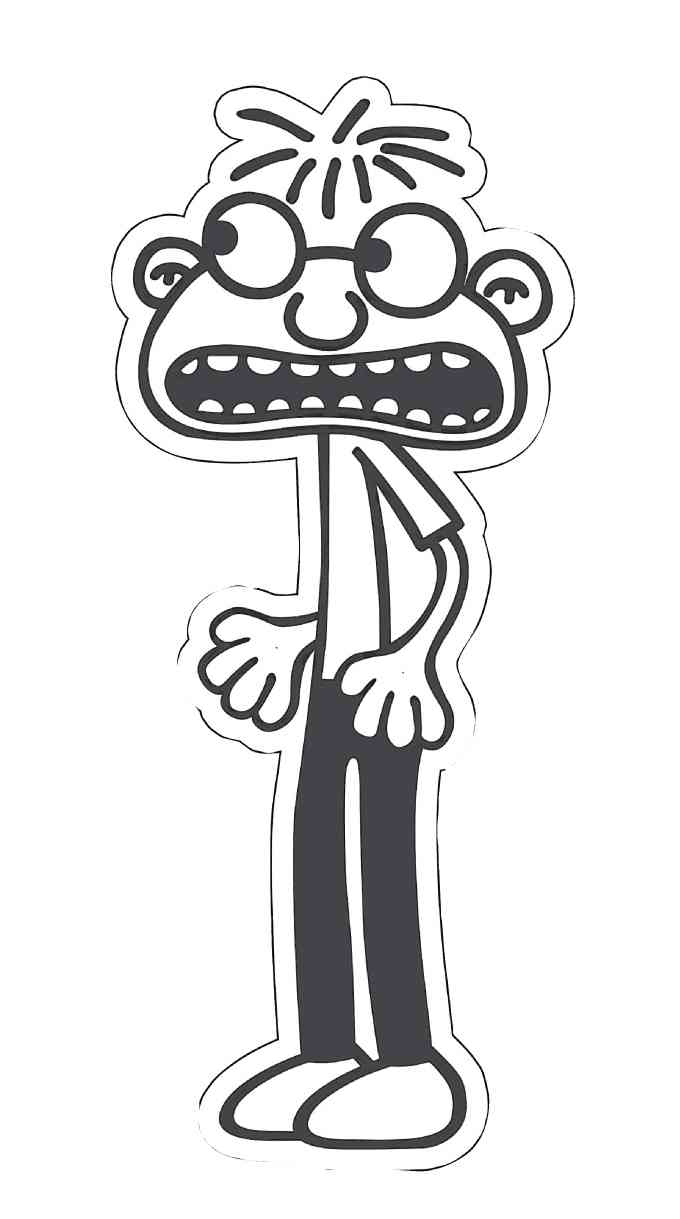 The (not at all) wimpy world of Jeff Kinney 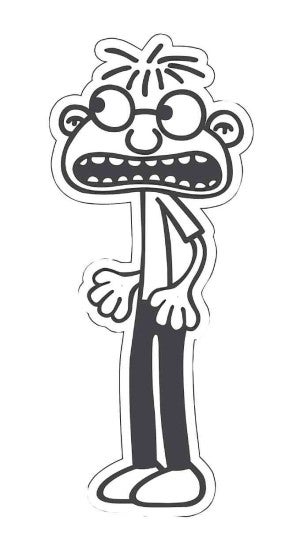 Do you really want me to draw on your arm? Are you sure?” Jeff Kinney asked.

The “Diary of a Wimpy Kid” author was in Manila for a book-signing event with National Book Store and, as I was setting up for our interview, he offered to draw for me. Instead, I said, “Actually, I was hoping you’d draw on my arm because I’m thinking of getting it tattooed.”

There aren’t a lot of Wimpy Kid fans who get tattoos of the characters from the series (at least not yet). Most of Jeff’s fans are too young to get inked—the series is a huge hit with kids across the globe, with each book dominating the New York Times bestseller list for weeks on end. But Jeff, who as a child had wanted to become a newspaper cartoonist, had originally written “Diary of a Wimpy Kid” for adults.

“I wrote thinking I was writing a nostalgia piece, (for) somebody who would be looking back on childhood. And then my publisher turned it into a children’s series and now I can’t imagine not having a kids’ audience. I can’t imagine going to a book signing and having adults there.”

“Diary of a Wimpy Kid” chronicles the misadventures of Greg Heffley, a young boy Jeff describes as “imperfect.” “I don’t think Greg is a rotten kid but he can do questionable things,” Jeff said.

The books are a fun and funny read but they’re more than just that. They’ve become my tool in getting young nonreaders to pick up a book (and they always work). Kids with dyslexia and autism have also been known to enjoy Jeff’s work. “I certainly never set out to turn kids into readers and I don’t want to pretend that I did but I love that that’s a by-product of all this. I like that these books are a gateway to more and better reading down the road,” he said. 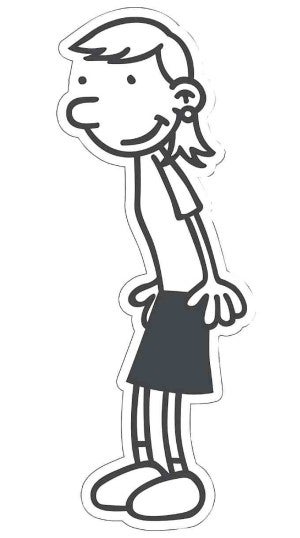 A lot of exciting things are happening in Wimpy world—“Double Down,” the 11th book in the series, just came out; a fourth movie is in the works; there has been a musical adaptation and Jeff is set to begin working on the animated TV series next year. We talked about all these things and more in this Super interview.

How has your visit to the Philippines been so far?

It’s been great. I touched down yesterday and the first thing we did was go into the old city, Intramuros. We had an excellent tour guide who gave us the history of the Philippines and the Philippines as relates to the Americans… it’s a really edifying conversation.

What do you think Greg would think of Manila?

That’s a good question. I think he’d be really out of his element. Greg’s not one for adventure, so… (laughs)

How does it feel to have your 11th book out?

I still sort of feel like I’m living in two worlds. One is my reality, I live in Plainville, Massachusetts, and the other is this kind of fantasy world where I woke up in the Philippines today. I never thought I’d get published so to have 11 books out is a shock to me.

Was there a particular moment that made you go, “Whoa, this is something big”?

One of them was last year. For the first time ever, we did a global tour. It was very strange to go to Latvia, Romania, China and to know that these books that I write in my little town are reaching these kids… I’m having the same experience now with India and the Philippines. It’s been fun and sort of mind-blowing.

Do you get a lot of adults who tell you they are fans?

It’s very unusual for me to encounter an adult who bought the book for themselves. Maybe once or twice over the past 10 years. 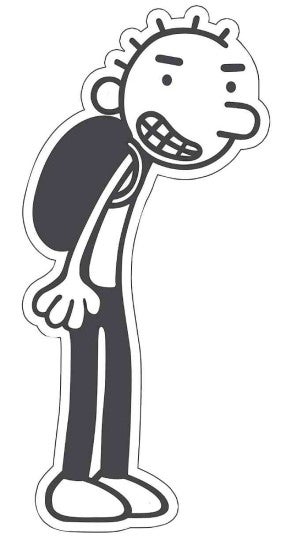 What did you read as a kid? Is it true you were into Judy Blume?

I had an older sister and she brought Judy Blume books into the house so I love them. I think there was some that were a little too girl-focused but she had some male protagonists like Peter Hatcher from “Tales of a Fourth Grade Nothing” and that kid from Freckle Juice. I eventually graduated to fantasy and read Piers Anthony, J.R.R. Tolkien.

How autobiographical is the Wimpy Kid series?

I would say Greg is a distilled version of my worst parts as a kid and then amplified. I wasn’t as mischievous… Greg is imperfect. I wasn’t quite as flawed. I had my good points.

What inspires Greg’s new misadventures? Do you get them from your kids?

I wish I did, that would be convenient. I really get them mostly from my imagination now. Sometimes there are seeds of things I had forgotten that I did as a kid. Like in this book, I forgot that I made movies with my friends. 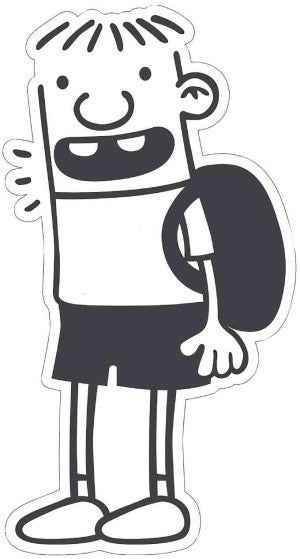 Are the characters inspired by other real-life people?

I’d say everybody in the books are kind of fun house mirror versions of my family.

So you have a Rodrick in your life?

I do. My older brother.

Did he have a band?

Yeah, he did. He was a drummer and he lived in the basement. Now he runs a music shop.

How does he feel about Rodrick?

I think he has fun with the character. He was on the movie set recently and he took a picture with the actor who plays Rodrick.

Did he play pranks on you when you were growing up?

He did. He played that prank on me in the beginning of the first book, where he wakes up Greg and tells him he slept through summer. He really did that.

How does it feel to have your own Macy’s Thanksgiving Parade balloon? This is the second one?

Yeah. We had one for six years and this one is brand new. My character is very basic, Greg Heffley is simplistic in his drawing and then you have Buzz Lightyear who is fully rendered and full 3D and color and so I feel a little self-conscious about my simple character. This year, we dressed him up with a lot of colors. I was trying to sort of even the odds.

You have to tell us about the new movie. How far along is it in production?

Filming ended about a month ago. Now we’re in post-production. It will be out summer or spring of next year.

How involved are you in the filmmaking process? Authors often have to learn to let go, right? Are you used to it because you’ve done it several times?

It’s my fourth time. You do have to let go. You have to know how to pick your battles, you have to know when to try and make your voice be heard. It’s very different from a book where I control everything. In the moviemaking business there’s a lot of people involved… but it’s been very enriching to be a part of the family of people who make these books into movies. It’s been great.

And there’s a musical, too?

It was in Minneapolis. It went for a few months. It’s really good and they’re gonna nurture it… it might even travel here. They just did a great job. The credit really belongs to them, the producers and the lyricist and the composer.

And you’re working on a Wimpy Kid TV series for next year?

Tell us about Poptropica.

It’s a virtual world that I created years ago. It’s a collection of islands where kids can go on quests. It’s a lot of different genres. It’s a lot of fun, it’s a great kids’ website and now mobile platform.

What’s the best thing anyone’s said about your work?

An adult said that the best thing about my books is you can’t sense the adult behind Greg Heffley and that’s what I really strive for, that authenticity as a kid.

What made you decide to open a bookstore? How long has it been open?

Just a year and a half. It’s one of the best parts of my life. I live in a little town with a population of just 8,000 and it’s a great way to bring in these world-class authors. It feels like a bookstore should feel. I feel lucky for that.

How does it feel to have been declared one of Time’s 100 Most Influential People?

At that time, it was very premature. I was very early in my career. I had only been an author for a year and a half at that point. It seemed almost like a practical joke, it didn’t feel like a real thing to me. But of course it’s a huge honor and I love that. I got a little pin that says “Time 100.” I think I lost it though.

There’s a really cool picture of the Pope holding the first Latin copy of “Diary of a Wimpy Kid.” What was that like for you to see?

How do you celebrate finishing a book?

I just go outside. When I’m working on a book, it’s very intense. There’s usually two and a half months where I’m doing nothing else but the book and I’m drawing from 13 to 17 hours a day. That’s 350 hours so it really wrecks me physically. At the end of it all, I just put my pen down and go outside. Maybe we do karaoke, sometimes we do that.

“Double Down” is available at National Book Store.