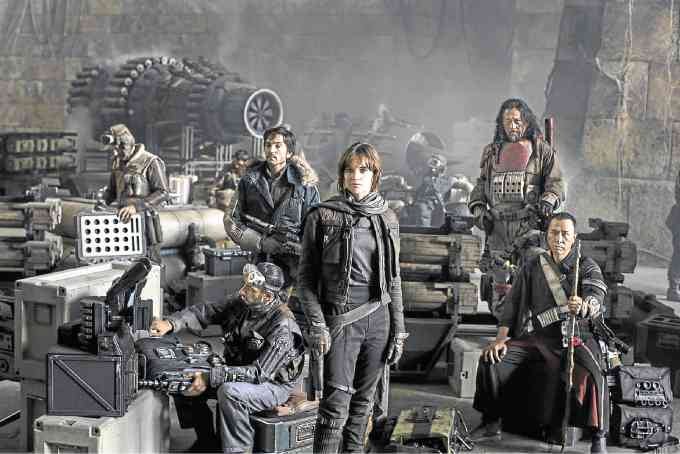 The greatest challenge facing anyone making a Star Wars movie is creating something new within the familiar confines of the Star Wars universe. So far, the directors and producers have trodden a path that follows the trailblazing route first charted by George Lucas when he launched “Star Wars: Episode IV—A New Hope” in 1977, with the seven episodes of the trilogies—also known as the saga films—staying within the archetypes and story strokes of the franchise. In fact, the most recent film, 2015’s “Star Wars: Episode VII—The Force Awakens” was in many ways a sleek homage by director J.J. Abrams to “A New Hope.”

Now it is time to do something really different. Lucasfilm decided they were going to do stories between the episode films, standalone films known as the anthology films that would expand the franchise—with the requisite fresh characters and settings—within instead of without.

“Rogue One: A Star Wars Story” is the first anthology film and has a lot riding on it. Lucasfilm has gone for broke by hiring Gareth Edwards—best known for the 2010 indie “Monsters” and the 2014 big-budget “Godzilla” reboot—to helm it. Edwards has a unique mix of skills from both ends of the filmic landscape, thus theoretically being able to make the most unusual of things, a “guerilla-style” “Star Wars” production.

In the days leading to the events of “A New Hope,” the powerful Galactic Empire is building the ultimate weapon, the Death Star space station under the cutthroat direction of Director Orson Krennic (Ben Mendelsohn). The leaders of the Rebellion know they must destroy the station somehow—and they must steal the plans to do so. A motley crew of outlaws gathers to do just that. Leading the crew will be the willful Jyn Erso (Felicity Jones from “The Theory of Everything”)—whose father Galen (Mads Mikkelsen from “Doctor Strange”) is the brains behind the Death Star. Backing up Jyn are Captain Cassian Andor (Diego Luna), the blind warrior Chirrut Imwe (Donnie Yen, the legendary “Ip Man” himself), his gun-toting partner Baze Malbus (Wen Jiang), the defecting Imperial pilot Bodhi Rook (Riz Ahmed) and the droid K-2SO  (Alan Tudyk), among others.

The big picture plot is easy enough to find. It is in the second paragraph of the iconic text crawl right at the beginning of “A New Hope.” This, ostensibly, is what “Rogue One” is about, but the film itself tackles this new corner of the galaxy (planets like Skarif and Jedha) in full detail. But it is a panoramic portrait of struggle. “Rebellions are built on hope,” several characters in “Rogue One” cry, but it is also true that rebellions are fueled by desperation. That quality shows up in the film like mynocks on an asteroid.

Prior to “Rogue One,” the darkest and grittiest Star Wars movie was undoubtedly “Star Wars: Episode IV— The Empire Strikes Back,” with its tendency to put key characters in real jeopardy and its combat sequences. That seems to be precisely where “Rogue One” wanted to go, with Edwards taking inspiration from Vietnam films like “Apocalypse Now” in his tropical jungle battles. There is a very modern, edgy quality to “Rogue One” that’s never been seen in a Star Wars film before. For the first time since “Empire,” it felt like the universe was really an unpredictably dangerous place.

That’s because “Rogue One” goes out of its way to show us that, unlike Luke Skywalker or Princess Leia in the original trilogy, all the characters leading the film feel expendable. The events of “A New Hope” may give away what happens, but, very importantly, does not say how they got there—or who survives the events of “Rogue One.” This is what the galactic civil war feels like from the ground level, as seen by the everyman. “Rogue One” puts the “war” in “Star Wars.”

In that sense, Edwards was a great choice to direct “Rogue One.” Together with cinematographer Greig Fraser (“Zero Dark Thirty”), he gives the movie a fiercely lit urgency, a feeling like something is going to go wrong any second now. But more than that, by using cutting-edge techniques and digital effects, Edwards manages to make a film that is both new and vintage Star Wars. He populates “Rogue One” with enough familiar touches to make it feel a Star Wars film and then shook the whole thing until a new film fell out with blasters a-firing. It’s stunning how right he gets the balance—and it’s only Edwards’ third full-length film.

Jones takes a big, juicy bite out of the role of Jyn, clearly the most formidable female character in the franchise, period. She brings a baggage to the character that is both substantial and haunted. She also shares the screen well with the now omnipresent Mikkelsen. Mendelsohn does his best impression of the deadliest bureaucrat ever. Stealing ever scene they’re in are Yen’s spiritual martial arts expert Chirrut (just wow) and Tudyk’s K-2SO, the snarkiest droid ever reprogrammed. Tudyk makes a good case for being everyone’s favorite motion-capture actor not named Andy Serkis. For a group of seemingly throwaway pieces, they sure are memorable.

The film even starts out differently—ironically, no text crawl—and the music by Michael Giacchino features familiar beats from John Williams’ famous score. “Rogue One” starts off with a thoughtful, brisk pace but when it reaches its climactic last act, it becomes a breathtaking piece of filmmaking, a powerful bit of pop-culture sci-fi that pleases both fans and newbies. It will make you gasp and clap at all the right parts. The Force is really strong in that part. It will make you want to watch it again immediately—and then start watching “A New Hope” right after.

Beyond that, it’s pleasantly shocking how snugly and brightly “Rogue One” fits into the franchise’s continuity instead of sticking out. Some have nicknamed the film “Episode 3.5,” seeing as it happens between 2005’s “Star Wars: Episode III: Revenge of the Sith” and “A New Hope.” But the way it’s built, “Rogue One” should be called “Episode 3.99” instead. It’s a good thing particularly for those who loathe the prequel trilogy. “Rogue One” may actually be where newcomers to the franchise should start watching: It’s the perfect first Star Wars film.

What a great opening act, and by extension, a tough act to follow for the next standalone film, 2018’s Han Solo anthology film, which, unlike “Rogue One” has the advantage of an established Star Wars icon as the foundation, albeit a younger version. Imagine where else the franchise can go from here?

With its franchise-changing nature and violent tone, “Empire” has been widely held as the best Star Wars film all these years. It now has company. “Rogue One: A Star Wars Story,” with its daring and creative twists, comes really close to that milestone, making it the second best Star Wars film ever made—better than “A New Hope” or “The Force Awakens”—making us realize that the new galaxy of possibility far, far away has never been closer to us.