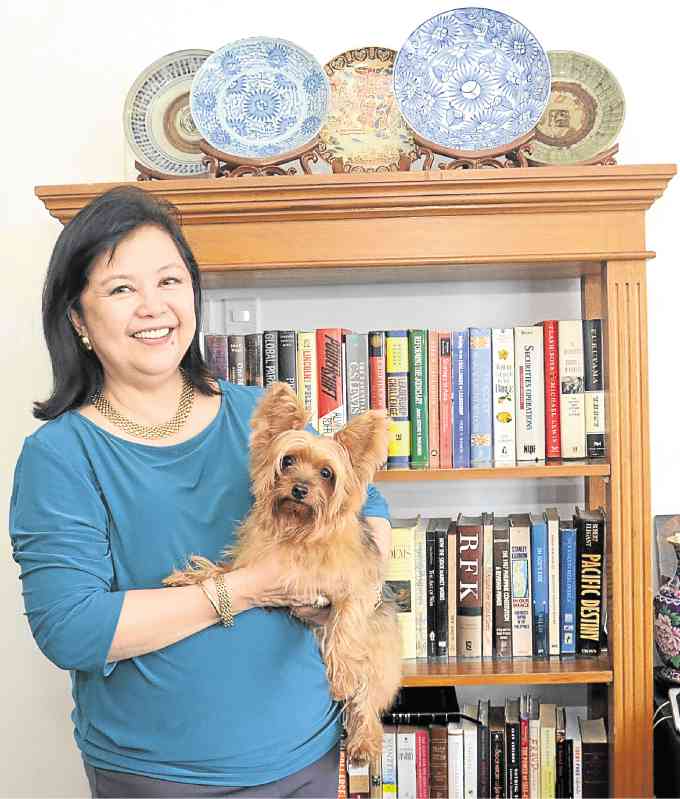 Cecile Yasay, wife of Foreign Secretary Perfecto “Jun” Yasay Jr. with her Yorkshire terrier Chloe. Her position as the wife of the foreign secretary comeswith responsibilities not faced by other Cabinet spouses. —ARNOLDALMACEN

Cecile Yasay: Why she’s the perfect ally to her husband

Unpaid yet intense” is how an observer would most likely describe Cecile Joaquin Yasay’s job as the wife of Foreign Secretary Perfecto “Jun” Yasay Jr.

Yasay takes to her roles like a duck to water. After all, she had spent decades performing various occupations in the United Nations (UN).

President Duterte’s choice of her husband as chief of the Department of Foreign Affairs (DFA) meant Yasay had to leave behind her “fulfilling life” in Hawaii, where she helps the state’s Filipino-American senate president craft laws.

“Had it been any other position, I wouldn’t have had to come home, but this is the DFA. I had to be here. I cannot use our daughter [Stephanie] as an excuse to stay there because she already turned 21,” Yasay said.

The choice of Mr. Yasay was a no-brainer, the wife insisted.  After all, the foreign secretary is a history buff and is well-acquainted with international relations.

“They think my husband does not have any formal experience. He doesn’t talk about it.  At 22, he was the youngest vice president of the World Alliance of YMCAs. He was going to different countries, conferences, discussing issues with older people,” Yasay said.

The foreign secretary actually had Henry Kissinger’s book “On Diplomacy” in his hands when he received the offer for the DFA portfolio. “There’s a plan in the universe—when it’s meant to happen, it’s going to happen,” his wife added.

The Cabinet spouse might be humble about it, but Mr. Duterte’s scouts should also have taken a closer look at her own diplomatic experience.

Yasay’s training began in her teens when, as a sophomore high school student of St. Theresa’s College, she joined her father, Enrique “Ike” Joaquin (brother of National Artist Nick Joaquin), when he was assigned to the UN as an attaché after a stint as auditor at Philippine National Bank.

Not surprisingly, Yasay later gravitated toward foreign relations, first working for 15 years in the UN Population Fund under Rafael Salas, before she was named Philippine representative to meetings of the UN as head of the Population Commission.

Diplomacy, she stressed, is what takes place behind closed doors, more than the ceremonies involving men in business suits standing between long tables and flags.

Yasay said informal bridges forged between envoys are most helpful when they negotiate without microphones and stenographers.

“When you talk about world peace, when countries don’t see eye-to-eye, peace is still possible when there are delegates who trust each other,” she explained.

Yasay said her UN training allows her to pick up a phone and say, “’This is the problem we have, can we sit down and discuss? What is your position? This is our position. Can we meet in the middle?’”

“For every issue, there are piles and piles of background paper. You really need someone who can absorb all the details… He is a student of history. He reads all the biographies of these great leaders.”

Case in point: When Mr. Duterte reportedly called US President Barack Obama a “son of a whore,” thus compromising the bilateral meet between the two leaders, it was the foreign secretary who explained to US Secretary of State John Kerry the circumstances surrounding the comment.

“My husband and Secretary Kerry had a lot of time to go back and forth; the secretary explained and Mr. Kerry understood. After that, President Obama’s statement was that President Duterte ‘is a very colorful person.’ He did not say anything more about the issue,” Yasay said.

It is during these informal moments when the element of trust works best, she added. “You’ve already built that trust.  Can you imagine if everything is just official? Madami na tayong giyera ngayon!”

Yasay is busy with her chairmanships. The International Bazaar Foundation Inc.  had a successful run at  Sofitel Hotel last month. The proceeds, as well as the roughly P3 million in cash donations, she said, are earmarked for a  drug rehabilitation project of the health and interior departments.

Part of the rehab efforts would be training “spiritual caregivers” of different religious denominations to respond to the needs of the patients.

The Asean Ladies Foundation will soon be busy with a coffeetable book showcasing the lifestyles of female ambassadors and spouses in the region.

The DFA Ladies Foundation is working for scholarships of young children of foreign service personnel who have finished their stints abroad.

“You cannot let me sit and not discover things. Naumpisahan ko na itong avenues to improve diplomatic service. This is completely unpaid,” Yasay said of her job.

The Cabinet spouse also noted that Filipino expats are responding well to the Duterte administration’s efforts to curb the drug problem.

“I had someone give me cash for the drug rehab effort. Sabi nila, they are private individuals who only want to reach out and help, even from a distance,” she said.

The one-time UN employee pointed out that global Filipinos are no longer limited to overseas workers, and many have not lost their love for the Philippines despite the distance.

“When we lived in Long Island during my father’s UN assignment, there were no Filipinos aside from us and the only other Asian, the Chinese who owned the laundry. But in town hall meetings now, I am very proud to say Filipinos are mainstream. They come from all walks of life. But even those from succeeding generations would still want to come back.”/rga