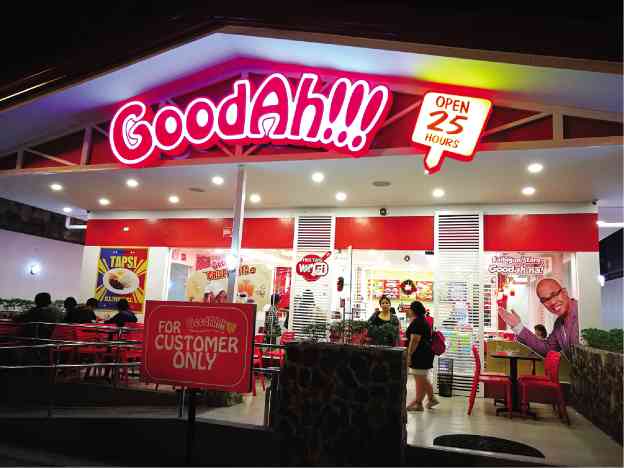 Night owls in Quezon City would be happy to find out that Goodah, a favorite late-hours eatery back in the ’80s, has opened a branch on Timog Avenue, just off the Boy Scout Circle connecting Tomas Morato Avenue.

The original Goodah outlet at Greenhills Shopping Center in San Juan was where people stopped to eat before going home from parties and watching gigs. In the wee hours, it was not unusual to catch then San Juan Mayor Joseph Estrada, in shorts and tsinelas, ordering goto.

Goodah’s popularity waned in the succeeding decades, even as branches opened on Shaw Boulevard, Pasig, and at the gas station at the corner of Connecticut Street and Edsa after the Greenhills outlet folded up.

But now that it has resurrected at its new location in Timog, we wanted to see if Goodah’s goto still had its home-cooked taste. So, one late night, we went in and ordered the staple dish.

The good news is, the “special goto” has lost none of its yummy flavor—the lugaw filled with pork innards, chicharon bits, spring onions and other garnish. It’s also cheap at P79 per order.

We’ll be back to try a new item, crispy pata, that we espied on the menu board.

You can’t miss its location because it’s brightly lit—and with a smiling image of Boy Abunda, who happens to have joined Goodah as business partner.

Moments after enjoying goto, we crossed over to the Circle Liquor Center to buy some wine. This is where a liter of Hardys cabernet sauvignon and merlot are sold at a special price of P350 each.

Guess who suddenly passed by—Abunda himself, laughing after learning where we just came from.

“Oh, you should come back,” he said before we waved goodbye.

Enjoy this at home

For those who live in the Timog-Morato area who want to spend the night drinking wine and nibbling on good food but with a limited budget of P1,000—here’s a suggestion:

Enjoy everything at home with some old jazz or new music.

The well-loved Sanrio character Hello Kitty will be starring in a Christmas live show series dubbed “Hello Kitty Live—Fashion and Friends,” from Dec. 20 until Jan. 1, 2017, at the Meralco Theater in Pasig.

The show is produced by Zen Tiger Live, in association with Royale Chimes Concerts & Events Inc.

But what can kids, parents and fans of all ages expect in the show?

From the press material: “First is the chance to experience a great story full of interactive scene and dance numbers on the notes of the latest pop hits. The soundtrack of ‘Hello Kitty Live’ has been conceived following the character’s profiling.

The show will also be more engaging with its use of new technology, original animations on high-definition LED walls and special effects.

It will also feature fashion and costumes designed by Japanese-inspired lifestyle brand TokiDoki.

After each show, a meet-and-greet with photo opportunity with the cast awaits ticket-holders who will avail of the Red Bow Pass at the venue on a first-come, first-served basis.