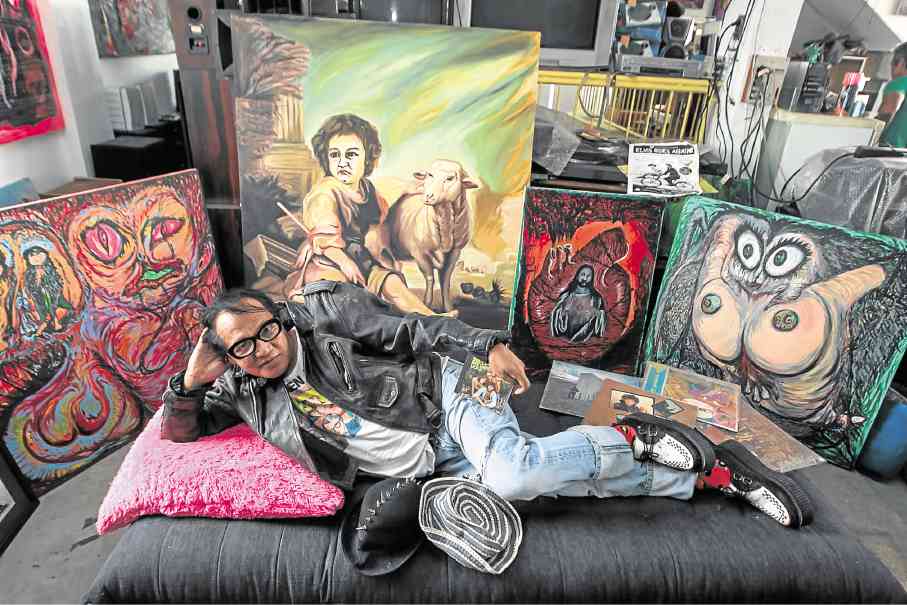 The face of contemporary Philippine art?

No, not Ronald Ventura.

The so-called “auction stars” may be getting the big bucks, and consequently all the media attention, but the iconoclasts of the local art scene seem to be having all the fun, and when all the hype dies down, may be doing more interesting work than the serious careerists.

It’s an inspired choice, considering that Lee sort of embodies the book’s “no chaos” theory:  Lee’s “Wild Thing” alter-ego as leader of the Brown Briefs band, his punk-inspired wardrobe carefully curated from mounds of ukay-ukay, and his ongoing obsession with high fidelity stereo equipment seem to have overshadowed his painting.

In fact, most people who know who he is seem to have only a passing familiarity with his work, if at all.

Thanks to his “class clown” persona and penchant for black humor and the grotesque, it’s also taken a while for gallery owners and curators to take his work seriously. Only tireless championing by more articulate cohorts such as Gerry Tan and Manuel Ocampo has led them to take a second look.

It’s only when they do that they realize that Lee’s vision and style—informed by surrealism, expressionism, primitivism and his own darkly humorous view of the world—have been consistent and evolving over the years.

And considering how much time he spends combing through thrift shops and ukay-ukay stalls, his output has been steady, if not exactly prolific.

He paints “old school,” he says, straight from his imagination on to the canvas.

Back in Tabuco Elementary in Naga City, the young Lee would draw endlessly at his desk, sometimes creating smutty pictures for the amusement of his classmates, much to the ire of his teachers, who would throw the blackboard erasers at him.

His father was Chinese who spoke little Bicolano, and worked variously at a bakery, as a waiter, and occasionally took bets in a kind of bingo popular at the time. Despite not being very well off, Lee remembers his childhood as idyllic, swimming in the river, diving for fish, nearly being bitten by water snakes—Naga City was still very rural at the time.

Apart from drawing, Lee was obsessed with music: He walked around with a little transistor radio glued to his ear, listening to the Beatles and the Bee Gees.

Studying art in Manila was the logical next step. His older brothers Roque and Ramon had already gone ahead, and were contributing cartoons to “Jingle” magazine by the time he arrived in the city. Later they created the long-running strip “Cesar Asar” for one of the daily newspapers.

Lee’s arrival at UP happened to coincide with the advent of the local hard-core punk scene, which grew around a slew of bands such as the Betrayed, the Urban Bandits, and George Imbecile and the Idiots.

Punk’s DIY (“do it yourself”) ethos, in particular, allowed him to embrace his own inner weirdness and let it all hang out. Pretty soon, Lee was dyeing and spiking his hair, wearing chains and studs and torn jeans, listening to the Sex Pistols and the Boomtown Rats on his Walkman while hanging out at the library steps—UP’s very own resident punk. He delighted in annoying the more “wholesome” elements on campus with his outlandish getup.

So much a fixture was Lee in those pre-internet days that when “Who” magazine ran a cover feature on the local punk scene in 1984, he was chosen to represent it on the cover, hair teased in a rockabilly coif and exuding an air of studied blankness behind his Wayfarers.

No long after joining the UP Mountaineers, Lee organized his first on-campus concert, tapping his contacts in the music scene such as the Jerks, the late Dominic “Papadom” Gamboa and even Pepe Smith. Eventually, this became an annual event, the long-running “Elvis” concert series which would run for decades and help jump-start the alternative music scene in the early ’90s by featuring up-and-coming bands, among them the nascent Eraserheads.

Apart from organizing the concert and booking the acts, Lee also served as emcee and host. This gig eventually gave birth to his “Wild Thing” persona. A highlight of each concert was Lee freaking out onstage while singing “Wild Thing” or “I Feel Good” with the featured musicians. This eventually evolved into the Brown Briefs band, a revolving cast of musicians with Lee as front man.

Despite the continued lack of commercial prospects, both for his painting and his music, Lee has persisted with both. These days, however, his musical involvement is largely restricted to listening to his vast collection of hi-fi equipment. He no longer organizes concerts, and it’s been years since he last did “Wild Thing” on stage.

On the plus side, this leaves a lot more energy for painting. It has only been in the last few years that the originality of his work has been more widely recognized, specially after he gained an unlikely patron in actor John Lloyd Cruz.

“Romeo Lee is an artist of unusual charm and talent,” Manuel Ocampo said in an interview.  “His work is so unrefined you might think he is doing it on purpose, but that is what makes his work stand out among the many painters in Manila.”