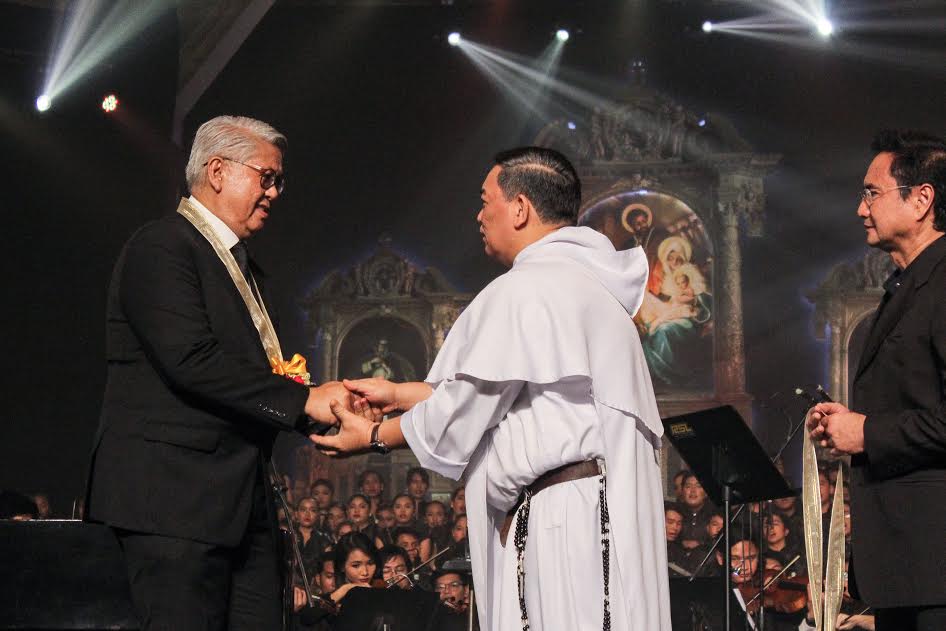 Cayabyab accompanied on the piano the world-renowned UST Singers and the all-student UST Symphony Orchestra in performing “Munting Sanggol” and “Isang Taong Lumipas.”

“This concert is a joyous and grand affair when you get only the best. I worked with the UST Singers so many times before and they are really great,” Cayabyab said.

Cayabyab, along with the UST orchestra, UST Singers and other campus choral groups, later rendered a festive presentation of his famous composition, “Kumukutikutitap,” to the crowd’s delight.

UST Singers is the only choir to have won twice the Pavarotti Prize or the Choir of the World title in the Llangollen International Eisteddfod choral fest in Wales, United Kingdom. It is led by conductor Fidel Calalang Jr. of the UST Conservatory of Music.

UST Rector Fr. Herminio V. Dagohoy, OP, said the 2016 concert was held in connection with the 800th foundation anniversary of the Order of Preachers, or the Dominicans, who run UST, the oldest university in Asia.

“While the UST Christmas Concert is no ordinary musical event that features the best musical artists, both Thomasians and non-Thomasians, it is also an event that joins everyone to feel the joy of the season and the solemnity of the Christmas spirit,” Dagohoy said.

The musical spectacle opened with an enthralling rendition of “O Beata Mater,” by the UST Symphony Orchestra under the baton of professor Herminigildo Ranera. The rendition utilized the UST church’s pipe organ, which was rarely played, sending chills down the spine of listeners. The lyrics were sang by soprano Thea Perez with the Coro Tomasino and Liturgikon Vocal Ensemble.

Adding grandeur to the event were the mesmerizing performances by Vienna-based tenor and UST Conservatory of Music alumnus Abdul Candao and 2016 Aliw Awards Best New Female Artist, soprano Demie Fresco, a student of the Conservatory.

Abdul serenaded the audience with a moving rendition of “O Holy Night,” while Fresco, joined by sopranos Ruth Brillo and Rosette Valencia, belted out “My Grown Up Christmas List.”

The concert concluded with all of the featured performers rendering “God Bless Everyone” and “Hark the Herald.” Members of the audience were invited to sing along.

“The concert serves as a gift to the University’s friends, benefactors, alumni, faculty, and students. That’s why we don’t settle for less; we want people to feel that we are giving them the best,” said Fr. Isidro C. Abaño, O.P, chair of the annual concert committee.

“This year’s event is even more meaningful because it coincides with the 800th year of the Order of Preachers, popularly known as the Dominican order,” Fr. Abaño said. “We are offering the performances to St. Dominic de Guzman, the founder of the Order, and to all the great Dominicans across the centuries.”

“Let us worship Christ, the light of the world. Without Christ, all our decorations are meaningless fanfare. It is the light of Christ that makes every Christmas beautiful,” Fr. Cabading said.

Concert this year was in partnership with UST Faculty of Civil Law dean Nilo Divina and the legal firm Divina Law. —CONTRIBUTED