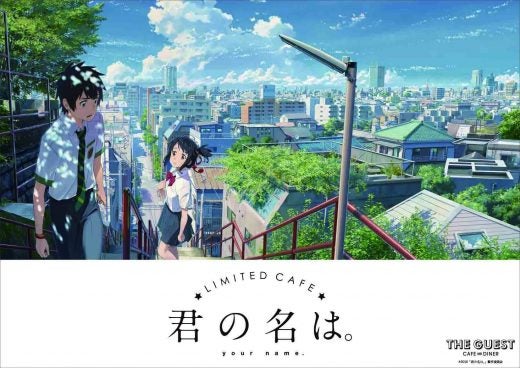 ‘Kimi no Na wa’-themed cafes opening in Nagoya and Tokyo

Fans of “Kimi no Na wa” (Your Name.) are in for a treat. Limited cafes in Tokyo and Nagoya are set to open next year, come January.

The pop-up cafes, produced by The Guest cafe&diner, will be themed after the runaway hit movie “Kimi no Na wa” and will be available to customers from January 27 up to April 3, 2017, reports RocketNews24.

These two shops will have a menu that includes some of the dishes that were seen in the movie such as the croquet sandwich, as well as each of Mitsuha and Taki’s breakfast. Other meals and drinks were created and especially themed to recreate scenes from the movie itself.

Aside from food items, the cafes will also be selling “Kimi no Na wa” collaboration merchandise. The items include clear files, t-shirts, cube magnets, key holders, smartphone stands, and many more. Information on the goods and menu can be found on the Tokyo and Nagoya dedicated websites.

It’s also worth noting that the inspiration for the staircase scene in the movie is only a few stations away from the Ikebukuro shop, specifically in the neighborhood of Shinjuku.

For those who have plans to visit Japan within these dates, don’t forget to stop by the cafes. If not, there’s still time to get a plane ticket or two. Alfred Bayle