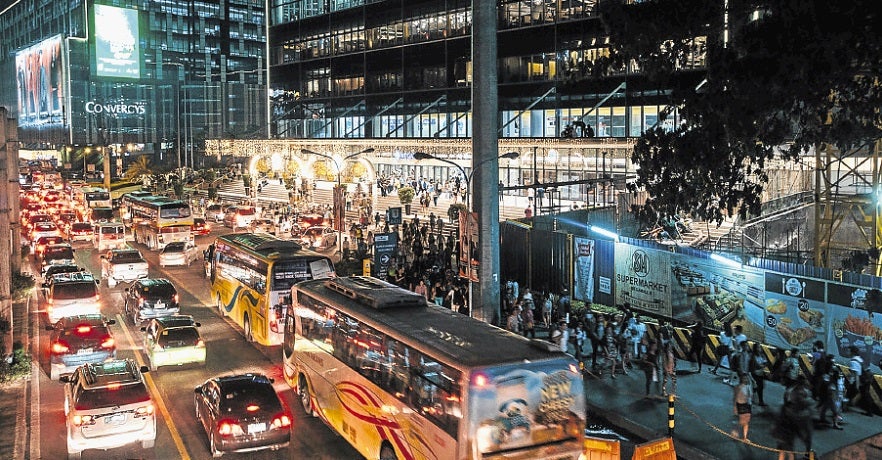 The prospect of being stranded on the road is keeping holiday shoppers away from the malls, say retailers. Above, Edsa traffic in early December. JILSON SECKLER TIU

It’s the traffic that impacts on retail in 2016

More than the gory news about the drug war and killings, retailers say it’s the worsening traffic that’s causing a major blow on holiday sales.

Less than a month before Christmas in late November, sales were still generally slow compared to previous years, according to a major lifestyle retailer.

“Traffic is a big thing,” he added. “We get lots of requests if we could deliver, or if we could reserve and they’ll pick up the merchandise on another day.”

Another luxury retailer, who declined to be named in this article, also blamed the worsening traffic, not so much the drug war, for poor sales.

“When P-Noy started to clamp down on corruption and do a lifestyle check, the luxury business was really affected, especially for watches and jewelry,” she said. “There were less walk-ins and many started buying abroad.”

Under the new administration, a dire situation got even more critical as “the traffic went from bad to worse!” she said. “When it rains, the malls are just empty. People just go home because they’re afraid of getting stranded.”

Lucerne Luxe managing director Emerson Yao, however, said luxury watch retail is doing well here, compared to how Swiss luxury watches are doing in the rest of the region.

“It’s challenging to sell luxury watches to the female market because they have other priorities,” Yao said with a laugh. “Handbags are our biggest competition.” But for the male market, there’s growth, although a modest one, he added.

Some prominent business owners and fashion industry insiders, who spoke to Lifestyle on condition of anonymity, expressed optimism about the long-term effect of President Duterte’s aggressive campaign to rid the streets of drug criminals.

But they also said his volatile nature and lack of diplomacy could further derail the country’s economy and eventually put the Philippines in an untenable position with its allies.

“It’s too early to feel the impact of the war on drugs on retail,” said one, who heads a company dealing in luxury goods. “However, it comforts me to know that crime rates are down, and we generally feel safer for ourselves and our family when we’re out late at night. Confidence in the future of the Philippines is also positive as a result of this cleanup.”

A chief executive of a homegrown apparel brand agrees. “Like most people reading the news, we feel a sense of relief that the war on drugs will ultimately make the Philippines a safer place for our children and the people.”

But “what concerns us at this point is the free-speaking nature of the President, which is causing instability of our peso, making it bad for business, and our relationship with our allies,” he adds.

Another executive, whose family is in the retail of imported goods, said what scares her is the peso’s continued decline, since she doesn’t think the drug war has had a direct impact on their sales.

“If the currency continues to fall, that will hurt businesses like us who import   goods,” she said.

Another apparel business executive also doesn’t think the drug war has had a direct effect on retail, “but the ramifications may have affected other areas, like the September bombing in Davao, increasing concern on peace and order, which may worry customers,” she said.

While her family is being cautious, they don’t fear for their safety, she added. But some of her employees have expressed their worry about the prospect of getting caught in a crossfire, since they commute daily.

Another businesswoman said the declining value of the peso could also affect consumers’ desire to spend.

On the home front, she said, she gets concerned whenever her son, 21, goes out at night. “My instruction to him is, ‘When there’s a checkpoint, never get out of the car. Turn on the light inside your car. As much as possible, be home early.’”

Two popular fashion designers have their faith and confidence in the President, even as they acknowledge that there’s a “slight climate of fear, especially when you hear news about victims of mistaken identity,” one said. “You tend to be afraid. You begin to ask yourself, what if that happens to somebody you know and close to you?”

“Of course there is fear because of what is going on, but I feel change is coming and that’s what’s important to me,” another said.

Another high-profile designer sees things differently. “Am I reading too much history or watching too much Netflix? Is it fabricated fear like what Hitler or the Underwoods [of   ‘House of Cards’] did, the fear of a drug addict lurking in the dark, waiting for his next rape victim?” he asked rhetorically. “Sure, they exist, but I believe it is grossly exaggerated.”

Still, he warns his nieces and nephews whenever they go out, “baka matiempuhan kayo.” But he also likes to make light of his worries, and tells them, “Ako di pagkakamalang addict kasi mataba ako!”

His real fear, he said, “is the fanaticism of a lot of people. Yes, there are trolls but I have friends, real friends, who believe Duterte is the last great hope of the Philippines. I wish I could see what they see in the man.”