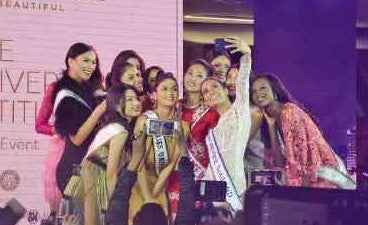 ‘Mama Renée will always be there!’ Albert Andrada not ‘dethroning’ Renée Salud

When you plan to put together 88 designers in one fashion event—a Miss Universe show at that—you can expect some sort of one-upmanship to ensue.

This early, however, Albert Andrada is already reminding his colleagues that the competition will not be among designers, but among the beauty contestants.

Andrada, the project director of the “Empowered Women” fashion show on Jan. 22 at SM MOA Arena—one of the ancillary events of the Miss Universe 2016 pageant—says “Empowered Women” is meant to showcase Filipino talent, and participating designers must set aside egos and present a united front, to show the world that “we’re professionals.”

Andrada and show director Robby Carmona, as well as committee members like Jonas Gaffud, are choosing the designers who will dress up the contestants—one contestant for each designer—for the formal sit-down dinner show. (Tickets will begin selling after the holidays.)

But to fill the 88 slots, they’ve opened the selection to other designers all over the country, who are being asked to send a proposed sketch of the evening gown he or she plans to make.

“We’re asking them to sign a waiver that if they deliver a dress that’s unlike what’s in the sketch, it will not be in the show,” says Andrada. This is to ensure that designers stick to the Miss Universe organization’s guidelines of no heavy or overly elaborate dresses that could cause potential injury to the contestants.

“It won’t be Filipiniana, but the color theme is the Philippine flag. It will all be elegant evening gowns,” he adds.

Since the Miss Universe organizers aren’t allowing dress fittings—at least, as of press time—the designers are being given a standard size for the dresses: 34-26-36, a beauty queen’s typical measurements.

To avoid a billing issue, they’re also assigning colors: red for the established designers; ivory for the seniors; blue for the young; and matte gold for Wurtzbach, Miss Universe “little sisters” and other guest models.

Andrada is, however, quick to clarify that he’s not “dethroning” Renée Salud as the next queen maker.

“Mama Renée will always be there!” he says. “I believe she’s doing her own thing for the Miss Universe. I just happened to be at the right place and the right time. I have a lot of respect for Mama Renée. And that’s how it should be: we should respect our senior designers in the same way we would want to be respected by younger designers.”