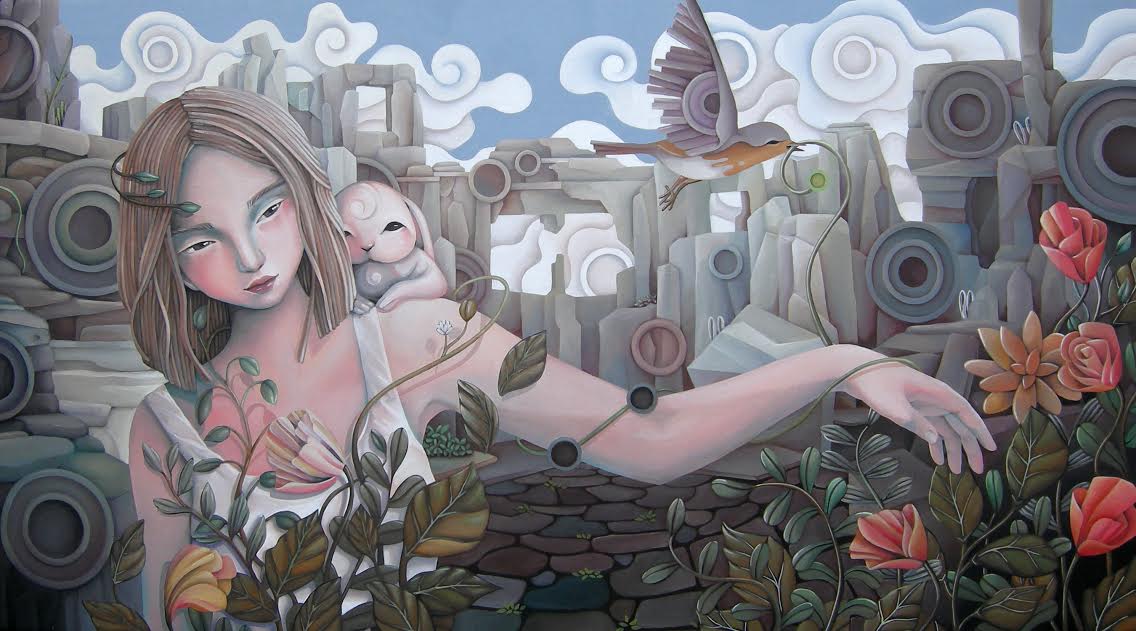 In “Continuum II,” opening tomorrow Dec. 27 at Artist Space of Ayala Museum, Gallery Big gathers some of the country’s most exciting artists in a yearend exhibit,   showcasing a contemporary brand of social realism that looks back at the year that was.

Buen Abrigo’s “Resurrection” is an eerie image of a deposed dictator in death’s repose. Francis Abrigo’s “Gold Digong” is a clever collage of cut-outs resembling the Philippine flag and the seal of the presidency.

Betsy Aytin’s “Ynang Bayan Defeats the Devil” is an interesting take on the iconography of St. Michael defeating Satan. Diklap Aytin’s “Show Your Solution II” is a troubling image of social decay.

Reen Barrera’s “Got Your Back” is a parody of flagellants during Holy Week. Renato Barja Jr.’s “We Are All Migratory” VIII and X   seems like two figurative renderings of migratory birds.

Boom Boom’s “41” is a mixed-media collage of torn newspapers embellishing human figures. Reynard Borillo’s “And the Greatest of These is Love” speaks about love of country and reconciliation.

Michael Cacnio’s “Time Bound” is an assemblage that features an old grandfather clock being appraised by a child. Xander Calceta’s “Kubol Maximum Security Compound” features the bars of a prison, stained with rust like blood.

Ronald Caringal”s “Movement” 1 is a play on monochrome that depict a vortex. Iyan de Jesus’ “Self-Preservation” is an allegory of the fragility of nature. Dr. Karayom’s “Random” is a playful use of the color red.

Christopher Fernandez’s “Aggression and Turmoil” 1 and 2 is a testament to colonialism, crab mentality, poverty and environmental degradation. Dino Cabito’s “Bend” is a monochrome in shades of gray, crumpled paper of mega proportions, crumpled fabric.

Jaime Gubaton’s “Residencia” is a deliberate, flat depiction of urban housing, in communities that package uniformity of low-cost residential architecture.

Jay Harold Hidalgo’s mixed-media work “Children Are the Living Messages We Send to a Time We Do Not See” is a mysterious depiction of a squatting child .

Maya Ladyong’s “Nowhere But Up Pilipinas” is a hopeful portrayal of blue with the Philippine flag soaring upward, with the flag a paper plane. Jonas Eslao’s “Two to Tango” features twin images of an antlered creature. —CONTRIBUTED