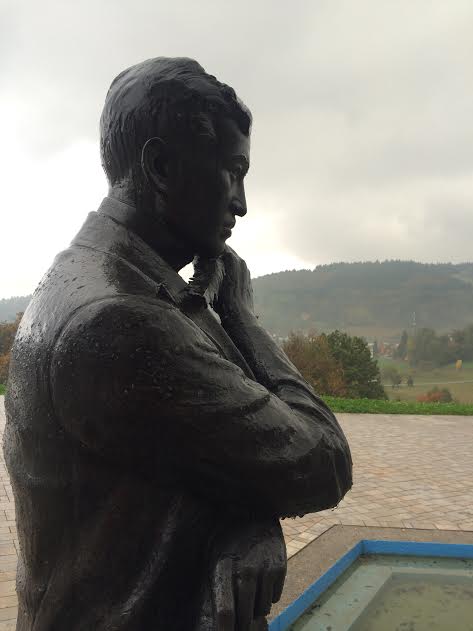 Close-up of Rizal’s statue in Wilhelmsfeld

Looking for Rizal in Wilhelmsfeld

HEIDELBERG—It’s amazing what José Rizal managed to do in his short life span—and where he managed to go. From continent to continent, city to city, Rizal traversed the world in a way that seemed impossible back in the late 19th century. What was that like?

We had a taste of that when a group of us decided to allot one day away from the busy Frankfurt Book Fair in late October to take an unusual journey—follow Rizal’s itinerary in Heidelberg and Wilhelmsfeld in Germany. Everyone knows Rizal stayed in Spain and Germany, but these two cities held a special place in his heart and life, remaining relatively undiscovered for most.

The planning of the trip itself had been hatched back in Manila in the month leading up to that Friday, Oct. 21. The traveling party met at the Frankfurt Hauptbahnhof—main station—before 10 a.m.

With such august company, we all felt like this was going to be a very meaningful and relatively obstacle-free sojourn. We settled in for the three-hour train ride across the German landscape. Summer had long ended and fall was sweeping in, with the air gaining bite and opacity.

We arrived in Heidelberg and then took a bus for the half-hour trip up to Wilhelmsfeld. It took us along Heidelberg’s gorgeous riverside with the old buildings up into the mountains.

Then, in the first of several unexpected developments, the driver of the bus literally stopped in the middle of nowhere and, without citing any reason, instructed all the passengers to get off the bus and wait for the next one. So we did, waiting for 20 minutes.

At this point, it must be said our resolve to track down Rizal’s path on this part of Germany had been made firm, because it appeared as though it would be as easy as we thought, and more on that later.

The next bus finally arrived and we soon arrived at Wilhelmsheld’s rathaus—town hall—in a small strip of town set against the fog-covered mountain.

It was pleasant but also disorienting to see the tricolor of the Philippine flag flying at this location, next to a sign announcing that Wilhelmsfeld was the sister city of “Calamba, Laguna.”

Rizal had lived here in Wilhelmsfeld for three months, taking very longs walks through the woods while finishing his first novel, “Noli Me Tángere.” He turned 25 here.

We knew there was a statue of Rizal in Wilhelmsfeld and had gathered instructions as to finding it. So we asked one person, walked to one direction, turned around and walked back. We kept walking in the other direction as a slight shower began to fall. We asked another person we passed, and so kept walking in that direction. The rain began to fall harder.

By the time we had asked yet another person, who made reference to a church, the rain started to really fall. We started to wonder what was going on.

“It’s like Rizal is making it hard for us to find him,” quipped Rio in Filipino.

We kept going, but when hail began falling out of the sky, we huddled for shelter in the church.

“Do you have any milk,” a smiling Rio asked.

Though soggy, we were not dispirited. We had come this far, and if Rizal had walked this way, we would as well.

We asked one more kind-hearted resident, and we finally figured out that the original direction we had walked was, indeed, the correct one. We just hadn’t walked far enough.

It was like a reboot. We walked all the way back and then kept on walking.

And then we found him.

The sign leading to him was a familiar one—“Rizal Park,” it read. In front of a colorful, tidy school building was José Rizal, standing straight with a book in one hand and a quill in the other. He was holding the quill next to his face, as if contemplating what to write next, while he looked out far into the valley.

This handsome statue—indeed, the most good-looking statue of Rizal I had ever seen— was sculpted by the Filipino sculptor Anastacio Caedo.

The statue had one very noticeable quality. Standing next to it, we figured out this Rizal was easily over six feet tall, much taller than Rizal in real life.

A few steps away from the statue were similarly larger-than-life busts of teachers who had taught Rizal. We were surprised to find one of Ferdinand Blumentritt, Rizal’s confidante and mentor.

It was one of those moments that felt significant and familiar here, so far away from home. CP had thoughtfully brought some German beer and plastic cups along, so we stopped to toast our National Hero. It felt both satisfying and humbling, to have walked in his steps.

Then we got on the bus and headed back to Heidelberg, where Rizal had studied and stayed. There were many little landmarks dedicated to Rizal, and we walked over to the nearest one, a plaque in front of an old building which we understood to be the ophthalmology clinic where he trained during his stay.

We had wanted to see the other spots in Heidelberg dedicated to Rizal but the afternoon had slipped away, the shadows lengthening. We walked down the picturesque riverbank the way Rizal surely had done.

It was time to begin heading back to Frankfurt, full of wonder and wistfulness at having been able to walk, even for a little bit, in the National Hero’s historic steps.