Monuments and memorials to Jose Rizal around the world | Inquirer Lifestyle ❮ ❯ 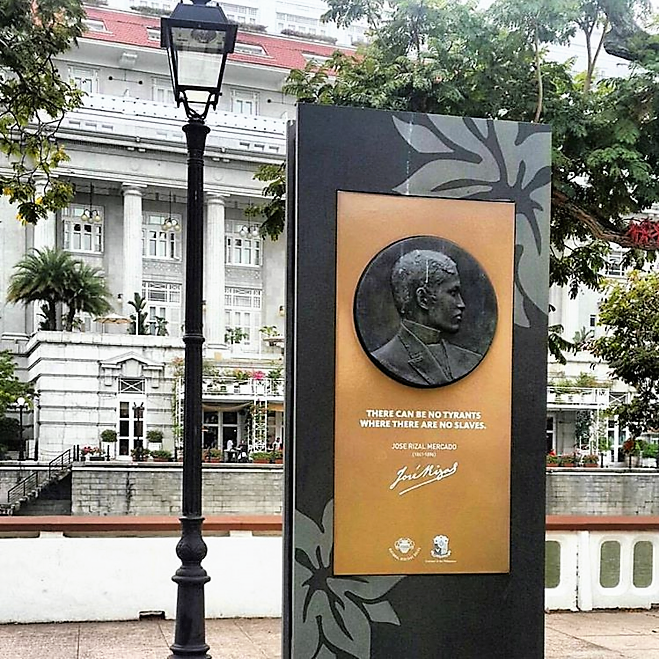 Monuments and memorials to Jose Rizal around the world

There is an anecdote about how, when he was a little boy, Jose Rizal was glimpsed by his sisters Olimpia, Maria and Lucia at the back of their small nipa hut in their Calamba ancestral home, busy molding some historical figures.

They “laughed and teased him about his crude work.”

“All right,” he told them, “laugh at me now, but in the future, see if people will make statues of me.”

Those words, expressed in childhood innocence, proved strangely prophetic. They are remembered these days in the run-up to Dec. 30, when the nation commemorates the 120th death anniversary and martyrdom of Rizal.

Today, we have statues and monuments of Rizal in   virtually every town or city plaza around the archipelago, as well as countless monuments of stone, granite or bronze not only in the Philippines but in four continents—in Asia, Europe, North America and Latin America.

Rizal sculptures bearing his likeness also stand in different parts of the world, even in places he never set foot in.

The list of countries is too long. Rizal monuments stand today in several countries that recognize him for his significant literary and scientific contributions, wide influence, outstanding achievements, intelligence and heroism.

Rizal visited Singapore four times. The first of his many visits to foreign lands was a two-day stopover in Singapore in 1882, where he went on a sightseeing of the city.

In 2005, on the anniversary of Rizal’s birth, President Nathan of Singapore and the National Heritage Board unveiled a memorial near the Asian Civilization Museum, featuring a bronze medallion of Rizal by a Filipino artist to commemorate his various sojourns in the city.

Madre España, of course, should have the monument of her Philippine son. Rizal stayed in Madrid for most of his European sojourn, from 1882 to 1891.

He arrived in Madrid for the first time in May 1882 after his medical studies at University of Santo Tomas.

In his diary, he wrote: “Madrid is one of the pleasant cities of the world; it partakes at the same time of the spirit of Europe and of the Orient.”

He did literary, artistic and patriotic pursuits, despite the many attractions and joyous sounds of Madrid.

A statue of the Philippine martyr and national hero stands in a prominent, well-traveled part of the Spanish capital.

The Rizal monument is located in a well-lighted and landscaped 70-meter corner lot in Parque Santander along Avenida de Filipinas in downtown Madrid.

The monument, similar to that in Luneta, has a four-meter-high bronze statue sculpted by Filipino artist Florante Caedo. It was unveiled on Dec. 5, 1996. The statue is placed beside the monument of the South American hero, Simon Bolivar.

From December 1891 to June 1892, he lived with his family at No. 5 D’Aguilar St., No. 2, Rednaxela Terrace, where he opened a medical clinic as an ophthalmic surgeon.

This site has a marker installed by Hong Kong Antiquities and Monuments Office. It reads in English and Chinese:

One of the happiest interludes in Rizal’s life was his sojourn in the Land of the Cherry Blossom for 45 days from Feb. 28 to April 13, 1888.

On Feb. 18,1888, Rizal arrived in Yokahoma and registered at the grand Tokyo Hotel. He proceeded the next day to Tokyo Hotel where he was billeted from March 2 to 7, and then transferred to the Spanish Legation.

He immediately worked on learning the habits, customs and tradition of the Japanese people, their culture, language, theater and commerce.

He also fell in love with a Japanese girl, “whose loveliness infused joy and romance in his sorrowing heart.”   Her real name was Seiko Usui.

Hibiya Park is the first Western-styled park in Japan located on a tranquil corner of the busy city of Ginza, which opened in 1903.

A bust of Rizal was erected on the site of the grand hotel where he stayed in 1888. The marker reads:

“DR. JOSE RIZAL NATIONAL HERO OF THE PHILIPPINES STAYED IN 1888 AT TOKYO HOTEL

He wrote in his diary: “I visited the great cities of America, with their grandiose edifices, their electric lights, and their great conceptions. America is, undoubtedly, a great country, but she has many defects.”

It was reported by the Asian Journal that “monuments of Rizal stand in eight US cities: Juneau, Alaska; Kauai and Lihue in Hawaii; Chicago, Illinois; Orlando, Florida; California; Cherry Hill in New Jersey; New York City and Seattle.

It was a gift of the   Philippine government to Carson City as part of the celebration of the 150th birth anniversary of the Philippine national hero.

Rizal left New York for Liverpool, England, on May 16, 1888.—CONTRIBUTED

Ramon M. Roda is a retired professor of Spanish and Rizal Course. He received study-travel grants from the Spanish government for post graduate studies in Madrid and Santander, Spain