Don’t hang up on your mom, or how to handle fascists at family reunions | Inquirer Lifestyle ❮ ❯ 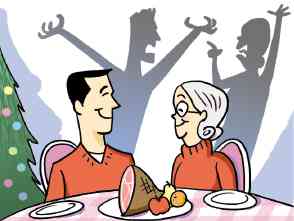 Don’t hang up on your mom, or how to handle fascists at family reunions

This Christmas weekend, you might want to consider not doing what I did a few weeks ago, when I called my mother to greet her Happy Thanksgiving.

I made the mistake of asking whom she had voted for.

In a surreal year when voters in Britain rejected the obviously rational, and the voters in the Philippines veered toward the irrational, at least it seemed that in the United States, despite a campaign that hit new lows each day, voters nonetheless choose to remain, hashtag, “with her.”

My heart was overjoyed when I express-mailed my overseas ballot back to New York City, thrilled, I told myself then, to be casting my vote for Hillary Clinton, surely destined to become the first woman president of the United States.

But it was not meant to be.

So, you can imagine I was nursing a pretty large, liberally western democratic wound when I called my mother on Thanksgiving morning.

It wasn’t a joke.

My immigrant, minority-group mother’s attempt at an explanation was not altogether unexpected; after all, her decision to vote Al Gore over Joe Lieberman in the 2000 poll was predicated largely on the nebulous decision of who was “handsomer.”

“You know, son, how much that Hillary lied,” my mother was just starting, trying to make a case for her vote for Donald Trump.

I took a deep gulp.

I said in all in about 1.7 seconds, and promptly hung up.

I’m not proud of it. People should never hang up on their mothers.

But this new “new” is scary.

The world has been rapidly evolving into this new “new” since Britons made the illogical choice to vote for Brexit in May of this year.

Then in June, despite a record of stellar economic growth, voters in the Philippines soundly rejected establishment candidates.

A dual Philippines-US national, I, too, took keen interest in the May elections. When the new president gave his inaugural address in late July, I watched and listened carefully, and despite initial misgivings, was cautiously hopeful.

He sounded like a new kind of leader; perhaps, I even mused to myself and to others around me, he could be the man for the moment. The long hoped-for, fabled hero for the Filipino story, part-caudillo-strongman and part-modern-pragmatist, determined to break the chains of the past and really give this poor country what it needs the most: a clear shot at success.

But then real shots started getting fired all across the country, and now, thousands are dead.

There were moments when, during these past weeks and months, I was a lonely member of an increasingly dying breed: the big-hearted liberal democrat, for the European Union, United Nations, Association of Southeast Asian Nations and Trans-Pacific Partnership. And for gun control, clearly.

But where does this new “new” leave us, those whose family members, close friends and associates have voted for the reprobate or the strongman or just the plain crazy choice this year?

It can make for some tough conversations this holiday season. And a lot of dropped calls. After all, it’s hard to confront the sad reality that maybe you’re related to a fascist.

Some weeks ago, a devastatingly bright, young representative of the Philippines’ new Reich related a tragic story to me about his family’s victimization by a crazed drug addict.

You cannot discount those stories for they are real.

But, I am convinced, more than ever, that this effort to, paraphrasing the current occupant of Malacañang palace, “make the fish in Manila bay fat with the bodies of the murdered,” only sets us further on a path toward perdition from which there may be no turning back.

I’m also convinced that despite the stock exchange’s recent bull market, my relatives in the United States have voted for the biggest bull—–er ever.

Navigating the disappointments can be a tough proposition this holiday season. Do you celebrate New Year’s like you used to in the past, or do you wonder if that shell exploding in the air wasn’t really meant for you?

Unless we can bring the temperatures down, and find those safe spaces to build bridges and take those calls instead of dropping them, then our days are destined to darken faster. The narrow window to find solutions to the problems we’ve created may become more intractable than ever.

A friend, writer and editor Romano Cortes Jorge, suggests that this holiday season, this Christmas, don’t hang up on your mother like I did.

But instead of avoiding the topic altogether, which was my other strategy, Romano suggests approaching it from another standpoint. Directly, but with ground rules and respect, and with a particular goal in mind.

First of all, you have to believe, as I do now, that those who do not share your belief or opinion are not fascists (even if you have really thought they might be).

Keep emotions—especially your own—out of the discussion as much as you can can. Try to discuss and don’t attack.

Most important is to be able to listen to the other person, to that “other” point of view.

Listen carefully. Listen to their reasoning and to their fears, and acknowledge that their concerns and their opinions are valuable and valued by you.

It is critical to understand where they are coming from. Chances are, there are a lot more of them than there are of you right now.

Stick to the facts. Try to show, in presenting the facts, that you don’t seek to change their world view.

But the goal you should have, the gift you want to give this Christmas, this holiday season and beyond, is to enlighten. And to become enlightened yourself.

So give yourself the space to listen.

It was at that dinner with opinionated New Yorkers and Manileños, people who passionately love their families, friends, cities and countries, even if they have more than one of them, that we all sought to seek common ground.

My friend asked me, in all seriousness and earnestness, “At the end of the day, don’t we really just want the same things?”

I studied his face, looked at him with complete respect and nodded in assent.

“I just don’t want it with these killings,” I said, matter-of-factly.

It was a moment of shared laughter.

With the ice broken, we began to talk about ways to get involved and become a better part of a shared solution, rather than remaining disparate parts of the ongoing problem.

Finding common ground is critical if we’re going to be able to face the challenges of the year ahead.

This Christmas, this holiday season and beyond, my wish for you and everyone is for more peace, one conversation at a time, one less dropped call than before.

We’re going to need it in the challenging days ahead.