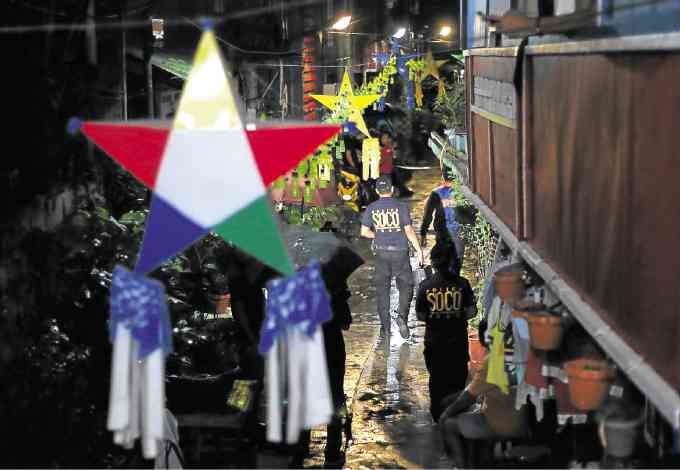 There is divided opinion as to whether the police are telling the truth or not. —RAFFY LERMA

Nothing, it seems—not even the fear of extra-judicial killings—can keep Filipinos from looking forward to a merry Christmas.

According to the latest survey by Social Weather Stations (SWS), 73 percent of adult Filipinos expect to be happy during the holidays. Only five percent expect to be sad, while 21 percent feel neutral.

“There is no shortage of optimism,” says Leo Laroza, director of Survey Data Archives, Library and Communication for SWS. “Filipinos are optimistic by nature, regardless of what’s going on.”

The same survey highlighted public concerns about the rising body count in the wake of the government’s war on drugs.

Seventy-eight percent of the respondents said they worried that they or someone in their family might become victims of extra-judicial killing (EJK), while 69 percent consider it a serious problem for the government.

The same respondents also expressed some doubt about whether the police were being truthful about drug suspects supposedly being killed because they resisted arrest. There is divided opinion as to whether the police are telling the truth (28 percent) or not (29 percent). The majority (42 percent) are unsure.

An overwhelming number of them (94 percent) also agree that suspects should be taken alive.

Despite these worries, however, public satisfaction with the government’s war on drugs remains high.

Eighty-five percent are satisfied with the government’s performance in its anti-drug campaign, and 88 percent believe that the drug problem in their area has declined because of it.

On the surface, there seems to be some dissonance in the findings: how can people be afraid (of EJKs) and still be optimistic?

“You have to look at the questions,” says Laroza. “There are two parts: we discussed both EJK and the war against drugs. When we asked the questions on EJK, they’re constructed in such a way that we’re only talking about EJK: how fearful are you that you or someone you know will be a victim of EJK? Whether the respondent connects it with the war on drugs or not is up to them. If you just focus on the concept of EJK, this is how they feel.”

On the positive side, he adds, people are satisfied with the campaign against illegal drugs overall.

“While there is fear of EJK, people still believe that the government is addressing the problem,” says Laroza. “Seventy percent say the administration is serious in solving the problem of extra-judicial killings. That gives you a picture that, yes, there may be worries, but they are still supportive of the campaign.”

Public worries over the killings do not automatically translate into distrust of the president or his administration.

“Even if they look at EJKs as a serious problem, they also see the administration as serious in solving it,” he adds. “There’s good will, and the trust rating is still very high.” According to the survey, Duterte’s net trust rating is at a high +72.

The current mood of optimism seems to be separate from concerns about EJKs. In fact, there has been a rising trend in optimism among Filipinos during the holidays for the past three years: from 71 percent in 2014, to 72 percent last year, to the current 73 percent.

The question on how Filipinos feel during the Christmas holidays has been part of the SWS survey for the last 15 years, with a record high of 82 percent in 2002. The current figure of 73 percent is the highest since 2003. But in general, optimism has been consistent, never dipping below 62 percent.

It says a lot about the much-vaunted Filipino resilience, and our ability to see the glass as half full instead of half empty, and that it is not connected with the change in government.

“It takes a lot to dampen Filipino optimism,” says Laroza.

Based on their opinion surveys, he adds, Filipinos turn pessimistic only if their hearts, or their stomachs, are affected.

For instance, the execution of Flor Contemplacion in Singapore, which the government was unable to prevent, was an emotional time for Filipinos that directly impacted optimism.

“We were saddened after one of our countrymen was executed abroad,” he says. “It affected the heart.”

The double whammy of the Asian financial crisis and the rice shortage in the late 1990s also dealt Filipinos a body blow that affected their optimism.

“Somehow, the ability to buy food was affected, and it affected the well-being of the respondents: their outlook became bleak. They felt they were worse off than the previous year, and were pessimistic about the coming year.”

Otherwise, hope seems to continue to spring eternal for Filipinos. Not even a cataclysm such as Supertyphoon “Yolanda” was able to dampen our optimism.

“We are modest as a people,” says Laroza. “We see ourselves as just getting by and there’s no way to go but up. That’s what makes us optimistic.”