From coffee to silk, you’ll find it in Bacolod | Inquirer Lifestyle ❮ ❯ 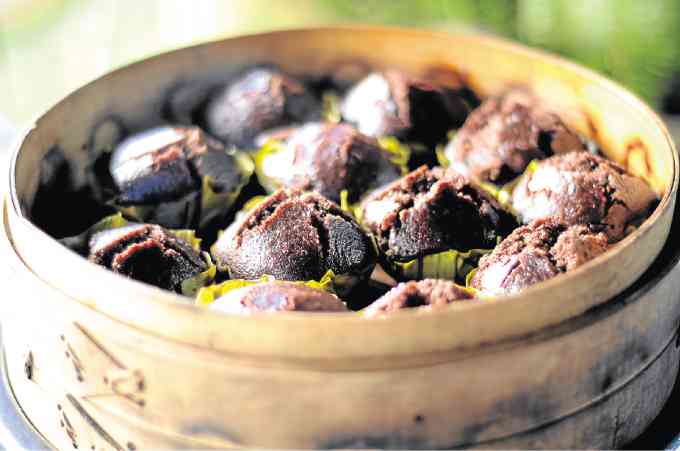 From coffee to silk, you’ll find it in Bacolod

Public markets in the provinces are always infused with the flavors of the town it’s located.

Tourists visiting the Central Market in Bacolod will realize it’s the heart of the region where they sell all the various delights of the province at affordable prices.

Here I tasted some of the best brewed coffees ever. Café Excellente serves it the traditional way: freshly roasted and ground coffee beans, boiled in a pot and then filtered through katcha (cheesecloth). Sugar is added while brewing, giving the coffee a delicious, bittersweet taste. The concoction is full-bodied, the flavors finely nuanced by the cooking process, and it only costs P10 a cup.

We paired the coffee with some Negrense delicacies. My companions (all of them from Bacolod and Iloilo) happily explained the names and origins of the sweets. We tried the bayi-bayi, rice cakes flavored with coconut, which taste like espasol, a childhood favorite of mine. It has two variants, one made with muscovado, and the other with refined sugar. The brown beats the white in terms of taste.

We then sampled the inday-inday (sweet rice cake), kalamay-hati (sticky rice cake made with muscovado and coconut milk), the dulce gatas and the puto Manapla.

Next, we went on a tour of the Herbanext Laboratories, a 100-percent Filipino-owned company based in Bacolod City, which is known for its rich soil and abundant plant life.

The company is into medicinal herb farming and processing, one of the few companies to do so in the country. It processes raw ingredients like turmeric, ylang-ylang and roselle, a plant now famous for its medicinal properties.

Cruz also lectured us about the medicinal properties of mangosteen, malunggay and ginger.

Then we proceeded to a wellness resort, Rapha Valley, in Brgy. Kumaliskis, Salvador Benedicto, Negros Occidental. The resort promotes wellness through meditation and healthy eating. All the ingredients from Rapha Valley’s dishes come from their own organic farm.

Owner Dr. Albert Jo and his wife, Marilou, toured us around their expansive 7.5-hectare property.

Try the farm’s black rice puto paired with its own version of dinuguan.

All the food in Rapha Valley is vegetarian. The black rice puto has a distinct, chocolaty taste, even though Doctor Jo swears that he did not use any cacao or other flavoring when making the dish. The puto alone is worth the visit.

Rapha Valley also offers seminars on health and the state of the food we eat today.

After Rapha Valley, tourists can go to the nearby Jomax Peak. The property has a view deck that offers visitors a breathtaking view of the mountain range in Igmaya-An, Negros Occidental.

The view has everything— rolling green hills, beautiful rice terraces. At far right, you can see the Malatan-og waterfall.

We next visited the Organization for Industrial, Spiritual and Cultural (Oisca) Sericulture project facility in Brgy. Tabunan, Bago City. The project was started in 1999 and is headed by director Shegumi Watanabe.

Thelma Watanabe was on hand to tour us around the only silkworm farming facility in the country. She said that Negros is the perfect place to grow and farm silkworms; the province is 800 meters above sea level, and the altitude is perfect for growing mulberry trees, the only food source of the picky silkworms.

The project provides 90 percent of the total silk production in the Philippines. Oisca-produced silk is used by the country’s top fashion designers like Jeannie Goulbourn, whose barong Tagalog design was worn by delegates to the 2015 Apec summit.

After touring the Oisca facility, we went to May’s Organic Garden & Restaurant in Pahanocoy, Bacolod City. The restaurant can hold its own against any of the posh dining places in Makati.

Try the binakol, a dish made with organically grown native chicken stewed in coconut juice, lemongrass and ginger.

The “KBL” is notable as well, a heady stew of kadios (pigeon pea, a legume), baboy and langka (jackfruit). It’s a classic Ilonggo dish.

The restaurant also has accommodations for guests who want to stay longer and tour its large organic farm. The place is a favorite venue for weddings and seminars.

Ann Co (wife of artist Charlie Co) got her recipes from her mother, Maguit Jalandoni-Legaspi, known in Negros for her mocha and chiffon cakes.

Anne’s restaurant likewise features artworks from various artists, as well as some of Charlie’s oeuvres.

The ubiquitous SM Mall has a branch in Bacolod. We had dinner at notable homegrown restaurant Ribshack in SM City Bacolod. The restaurant is the brainchild of young couple Delman and Yani Alagao.

The baby back ribs are delicious—the meat falling right off the bone.