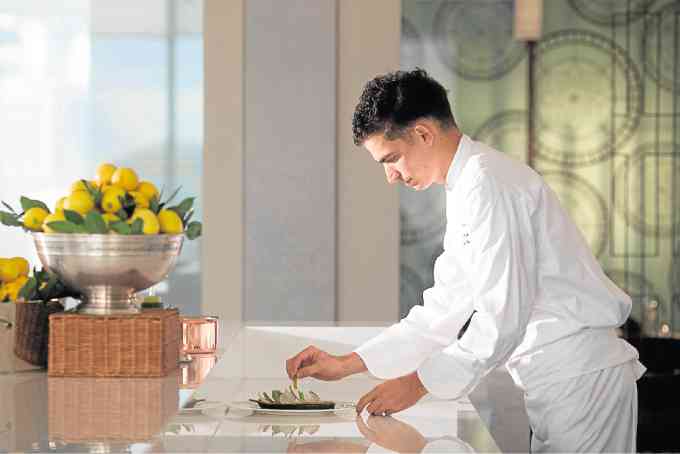 Was it a sign of the times when French outlets started disappearing from hotels? Champêtre at Bonifacio Global City and Cicou in Greenhills are gone.

One can count on one’s fingers the French stand-alone restaurants still around today. So it was a surprise when Raffles in Makati announced it was opening a French restaurant—specifically, a brasserie called Miréio, serving Provençal-inspired dishes.

“Miréio” (mee-reyo) is a work by the Provençal Nobel prize-winning poet Frédéric Mistral, and the logo uses Mistral’s handwriting. How appropriate that the chef, Nicholas Cegretin, is from the place, and has created a menu that reflects his home food, even incorporating his grandmother’s cooking.

Raffles general manager David Batchelor, who welcomed guests a few days before the official inauguration, said it took a while to open the hotel’s featured restaurant, though there are other dining places like the Writer’s Bar, the Long Bar and Spectrum, the buffet outlet.

Instead of a tiny amuse-bouche, as most restaurants would serve it, the plate looked like an artist’s palette, offering smoked and fresh salmon and Beef Tartare with goat cheese. The restaurant serves several kinds of tartare, one of the chef’s specialties—a good thing to know if you are a tartare lover like me.

Nothing seems to come small at Miréio. The foie gras was generous, served with Granny Smith apples and a ginger chutney, hinting that the menu includes flavors not necessarily French, but also those that enhance the dish. A bit of Spanish chorizo, for instance, made the green chilled zucchini soup lively.

Because the fish course was grilled skipjack tuna, which needed flavorings to go with it, chef Cegretin used a carrot foam and squiggles of caramel to do just that.

But the oxtail parmentier served in small copper casseroles had what one expected of stews—deep flavors developed through slow cooking, with the potatoes forming a soft crust on top.

And just to emphasize that this is a French restaurant, dessert was Rum Baba, but with a touch of the international in the lime and coconut pana cotta and a sherbet of mango and passion fruit.

The macarons we were given to take home are perhaps the best I have had in this town.

Cocktails at the rooftop terrace were quite inviting, especially with the cool December breeze to fan you while you took a drink that warmed you up.

In case the weather doesn’t permit lounging outside, there is an indoor bar nearby. Apart from the wines and cocktails, perhaps a shot of pastis may really bring you to Provençe—for many of us, the most beautiful region in the French Mediterranean.

At the end of the meal, we were asked if we wanted a bit of absinthe, a spirit also known as “the green fairy” because of its color and reputation as a hallucinogen. Nothing like an invitation to be adventurous.

Like in all brasseries, the atmosphere at Miréio is rather casual, and the amenities not quite as stiff as one may find in fine dining French restaurants. The dining area has a grand view of the Makati skyline. But the view inside is as compelling, with works by local artists adorning the walls. Of these, Marcel Antonio painted what may be regarded as the centerpiece, his interpretation of Mistral’s poem “Miréio.”