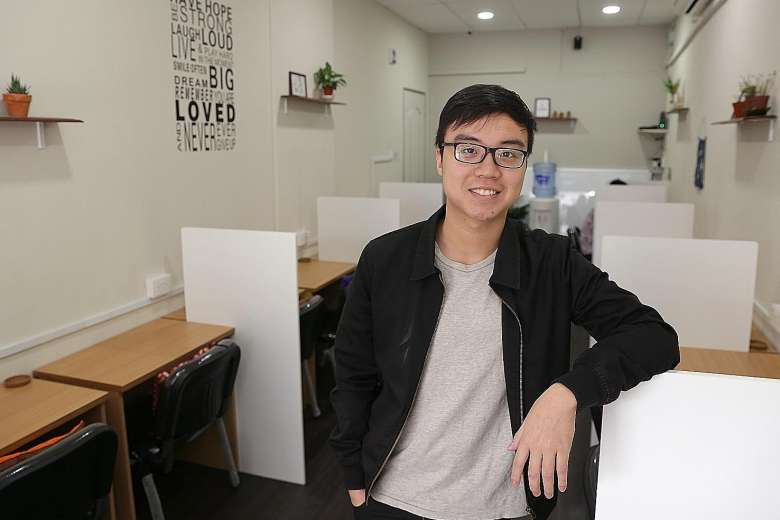 Mr Tan started a study area called Desk Next Door, which can take up to 18 people, in a Housing Board shophouse in Ang Mo Kio Avenue 10 in July last year. THE STRAITS TIMES/ASIA NEWS NETWORK

The issue of seat-hogging has become a perennial bugbear whenever exam season rolls around.

From airport lounges to cafes and even hospitals, the sight of students crowding into public areas to study for hours at a go has drawn the ire of some members of the public, with numerous complaints filed about the issue over the years.

Now, some entrepreneurs are offering alternatives: pay-per-use study areas that function much like co-working spaces.

For a flat fee, students can secure a desk space to study for hours at a stretch, and have access to Wi-Fi and power points, and even beverages and snacks.

Most of the “co-study areas” that offer such services charge an average of $1 (P34) an hour, with cheaper rates if one books a seat for longer stretches of time.

Last July, entrepreneur Tan En Wei, 23, started a study area called Desk Next Door, which can accommodate up to 18 people, in a Housing Board shophouse in Ang Mo Kio Avenue 10.

The idea for the service came from his own experiences when he was a polytechnic student.

“I couldn’t study at home when I was a student, but when I went out to study, it was hard to get a space in fast-food restaurants or libraries, and you might get chased out during peak hours,” said Mr Tan.

Response to Desk Next Door, which is also open to working adults, has been good, with about 30 to 40 students using the space every week during the peak period of September to November.

A spokesman for The Study Area, which started in July 2015 and now operates two study spaces in Tai Seng and Kovan, said it expects to be “expanding quite aggressively” in the next few years, with plans to open one to three units this year.

The spokesman said that, during peak season last year, almost all of its 60 12-hour slots at its two centers were taken up.

He said The Study Area also hopes to provide opportunities for networking between adults and students, shaping it into a community space similar to co-working spaces.

The idea for such set-ups came from reports about the need for study space, said the spokesman.

Other organizations such as Sky High Educators, an education services start-up, rented space from a co-working space run by a marketing firm at International Plaza.

As part of a pilot program funded by self-help group Yayasan Mendaki, it provided a study space for 15 undergraduates over five days in November at a rate of $5 (P170) for five hours.

Mr Harith Sulaiman, 25, who is doing a mechanical engineering degree at PSB Academy, said he started going to The Study Area last August. “I used to study at cafes like Starbucks and would always end up paying for a drink or two, so I might as well use study spaces like this. It’s cheaper and not noisy at all,” he said.