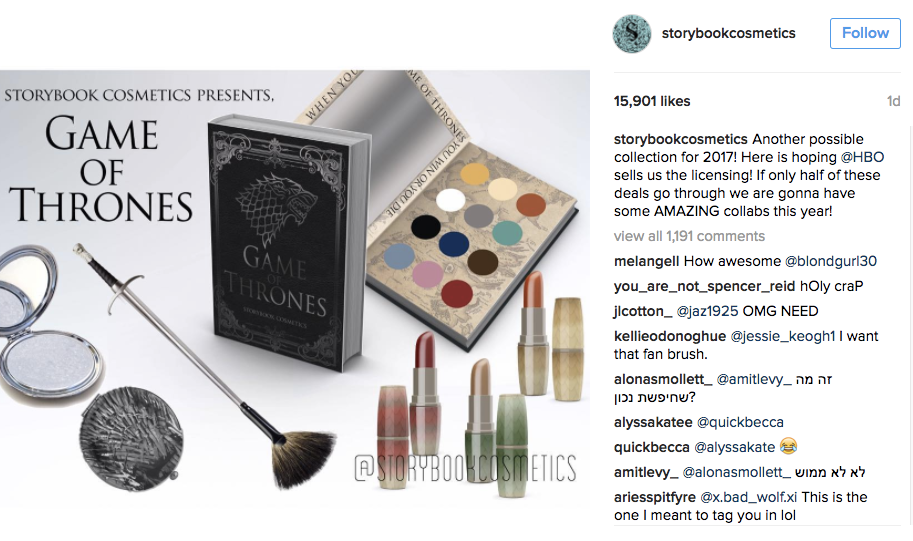 While waiting for the seventh “Game of Thrones” season, Daenerys Targaryen and Sansa Stark wannabees can drool over these new cosmetic must-haves.

Storybook Cosmetics, a Nebraska, USA-based cosmetics startup behind the Harry Potter brushes, announced on Instagram that they’re spawning a “Game of Thrones” makeup collection. The proposed kit includes a 12-shadow palette formed like a book, sword make-up brushes, a compact powder, and lipsticks that have shades akin to the series’ costume hues.

The company is currently waiting for HBO, the series’ cable provider, to license them to manufacture the products.

“Another possible collection for 2017! Here is hoping HBO sells us the licensing,” the company captioned its Instagram post on Wednesday. “If only half of these deals go through we are gonna have some amazing collab[orations] this year.”

In addition to “Harry Potter” and “Game of Thrones” cosmetics, Storybook Cosmetics also marketed other products inspired by literary legends and popular hits, including “Star Wars” lightsaber brushes, “Doctor Who” Sonic screwdriver brush and “Wizardry and Witchcraft” palettes. Also, a brush shaped like a red rose will be launched alongside its “Game of Thrones” collection.