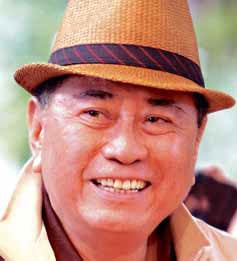 MANILA — National Artist for Literature Virgilio Almario has been elected the new chair of the National Commission for Culture and the Arts (NCCA).

Malacañang is not expected to deny the appointment especially since amid rumors last year he would be replaced as head of the Komisyon ng Wikang Filipino (KWF) by singer and Duterte campaigner Freddie Aguilar, Almario was retained.

Election to the NCCA chair is among the heads of the cultural agencies that sit on the NCCA board in an ex-officio capacity as well as the heads of the four sub-commissions — on Arts, on Culture and Heritage (SCH), Information and Dissemination, and Cultural Communities.

It was rumored that Aguilar would be named as commissioner for the Tagalog language for him to qualify as chair of KWF and later, as head of NCCA.

Almario was elected over the other nominee – SCH head Fr. Harold Rentoria, an Augustinian friar and a respected heritage advocate.

Almario, aka Rio Alma,  is one of the country’s leading poets and writers in Filipino.  He is a critic, scholar, literary historian and lexicographer. He was named National Artist in 1999.  SFM