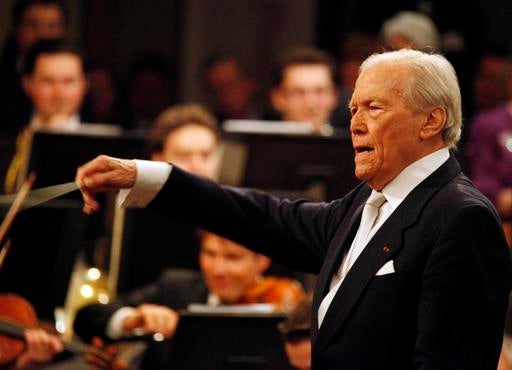 In this Jan. 1 2010 file photo, French Maestro Georges Pretre conducts the Vienna Philharmonic Orchestra accept applause from the audience during the traditional New Year's concert at Vienna, Austria. Pretre, who conducted renowned symphonies from Vienna to Milan's La Scala and New York's Metropolitan Opera and was instrumental in Maria Callas' opera career, has died. He was 92. AP

PARIS — Georges Pretre, who conducted renowned orchestras from Vienna to Milan and New York and beyond and was instrumental in Maria Callas’ singing career, has died. He was 92.

Still conducting until the final months of his life, “the Maestro Georges Pretre” died at his home in southern France on Wednesday, according to a statement from Milan’s La Scala hailing his 50-year relationship with the theater.

Pretre last conducted in October at a performance of the Vienna Symphony Orchestra at the Musikverein, where his rendition of Ravel’s Bolero earned a standing ovation. The symphony posted a video of him waving his wand vigorously before blowing kisses to the crowd and smiling broadly.

Born in France on Aug. 24, 1924, Pretre studied at the Paris Conservatory and was Callas’ first conductor at the Paris Opera. He went on to conduct in New York’s Metropolitan Opera, in Chicago, London and Tokyo.

His musical dedication didn’t fade as he entered his 10th decade — he last conducted at La Scala in February, in Paris in 2013 and at the Vienna Philharmonic Orchestra’s 2010 new year concert.

France’s culture minister praised Pretre as a “remarkable ambassador” appreciated around the world for his “art of letting musicians play.”

Austria’s culture minister, Thomas Drozda, said that Pretre “was a master of musical intellectuality and also someone who understood to generate emotion through music.”

He continued, “At home in all the world’s musical metropolises, he stood for a particular musical language in which European traditions were combined.” TVJ