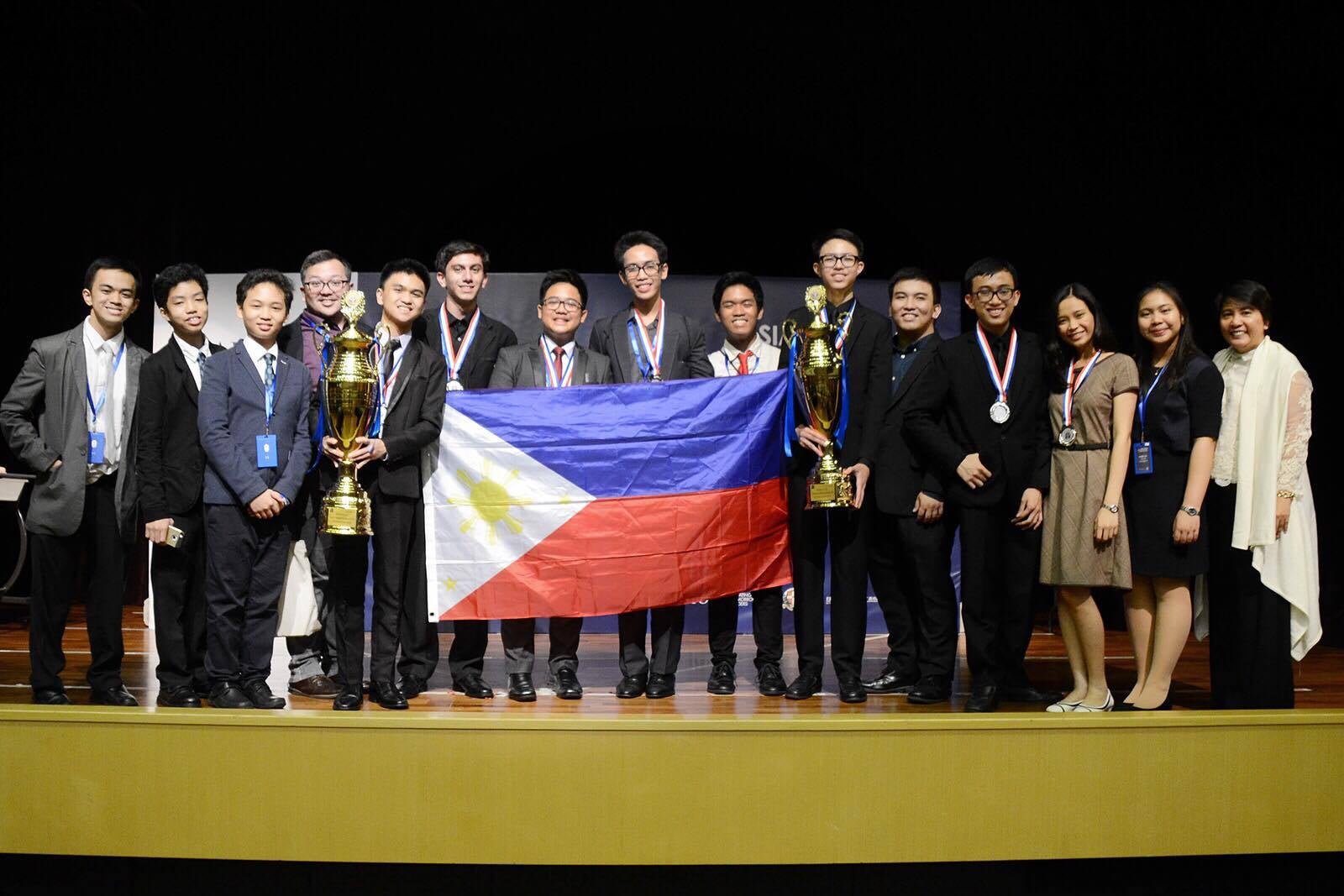 Four Ateneo High School students will represent the Philippines and Asia in the Cambridge Union Schools Debating Competition in February 2017. The tournament is one of the biggest and most prestigious competitions in the world.

In the past few months, several regional heats have taken place in areas all over the United Kingdom. Over 600 teams and 1,200 debaters competed for slots on the Finals Day in February.

Only the top 60 teams overall were granted slots to compete in that event, and four Ateneans—Luigi Anton S. Alcañeses, Hans Rinaldi B. Gonzalez, Nelson Matthew P. Tan and Julia Isabelle A. Ocoma—have proudly earned two of these slots.

Teams comprised of two debaters, each argued through five rounds of preliminary debates and three elimination rounds. Topics ranged from health care and international relations to economics and religion. The debaters were given 15 minutes to prepare for each topic, before delivering five-minute speeches against their opponents.

A seasoned debater, the Grade 11 Gonzalez experienced many challenges in ABC. “The biggest challenge for me was adapting to a completely different format, from what we were used to. Compressing the same amount of content from seven minutes to five really forced us to be more concise with our words,” he says.

Alcañeses, a Grade 12 student and captain of the Ateneo Debate Team, attributes the team’s success in ABC to several years of international debating experience. “I cannot compare any classroom experience to the experiences I have had in Malaysia, Korea, Singapore, Hong Kong and China,” says Alcañeses, a regular of high school and university-level debate tournaments abroad. “These have given me opportunities to not only see the world in a larger perspective, but also to realize that the diversity in sharing ideas is enriched when you get to meet people from other cultures.”

Alcañeses and Gonzalez were members of the Ateneo Debate Team that won the Asian Schools Debate Championship (ASDC) in Kuala Lumpur, Malaysia, last June. With Grade 12 student Renz Reyes, the trio brought the Philippines its first Asian Championship since 2010, when another trio of Ateneans—Vincent Soriano, Javier Pablo and Anton Sison—won the most prestigious debate competition in Asia.

With ABC behind them, the Ateneans are preparing for the actual competition in February. Finals Day is expected to be an intense and heated competition, with the best of the best debaters from all over Europe vying for the coveted crown.

“I plan to exert even more effort in training, ‘matterloading’ and studying different styles of debate. I am also looking forward to working with our alumni and coaches to better prepare us for the tournament,” says 10th grader Tan. “Matterloading” refers to reading books, magazines, journals and website articles on current events and theories.

“Debate allows you to dive into different issues from around the world and in some way be involved in them,” he continues. “Through debate, I am better able to appreciate the things that happen inside and outside the Philippines.” At 15, Tan recently won a debate championship at the Luzon Intervarsity, the largest and most prestigious collegiate debate competition in the country.

“I expect exponential improvement in terms of performance because I will be debating against the best of the best. Every debate round will be an opportunity to pick up on new ideas and concepts that can be integrated in future debates,” says 11th grader Ocoma, a member of the pioneer batch of co-eds in Ateneo de Manila High School. As a former student of Ateneo de Naga High School, she has won numerous regional tournaments in Bicol.

Tan and Ocoma won the team slot to Cambridge by accumulating the most number of points after the preliminary rounds in ABC. They were ranked first among the 60 teams in the competition. Both also tied as the Third Best Speakers in Asia in the 19 Years Old and Under Category.

This year marks the first time that debaters outside of Europe will be allowed to compete at the Cambridge Schools Debate Competition. In addition to Ateneo de Manila High School, only a handful of teams from Anglo-Chinese Junior College from Singapore, Ladies College from Sri Lanka and Miriam College High School from the Philippines were granted slots.

Highly respected Cambridge Union debaters were present in the tournament in Hong Kong to judge the debate rounds. Alasdair Donovan, deputy chief adjudicator, was quoted as saying that some Asian high school debaters were as good, if not better, than their peers in Europe. “The fact that English is a second language for many of the debaters seemed to make very little difference,” he said.

Beyond the competitive aspect of debating, the Ateneans remember that discourse is but a means toward a greater end. “Debate revolves around problem-solving,” Gonzalez says. “There is an expectation to extend the reach of your knowledge beyond local issues. In this sense, you feel like a global citizen of sorts.”

The foursome is very grateful for its once-in-a-lifetime opportunity to compete in Cambridge. It extends its sincere gratitude to Ateneo High School principal Dr. Carmela C. Oracion and the entire AHS administration for its unwavering support and guidance. The team is also grateful to its sponsors, Landbank and Pru Life UK.

For Alcañeses, competing in Cambridge is a great achievement in itself. “It truly is an honor to bring the Philippine flag to the international stage. I know we will be filled with pride when we get to speak before the Cambridge Union adjudicators. There is pressure on us to make a good first impression on behalf of our country and region, but we will embrace it as a challenge to prove that Filipinos can stand among the best on a global stage.”