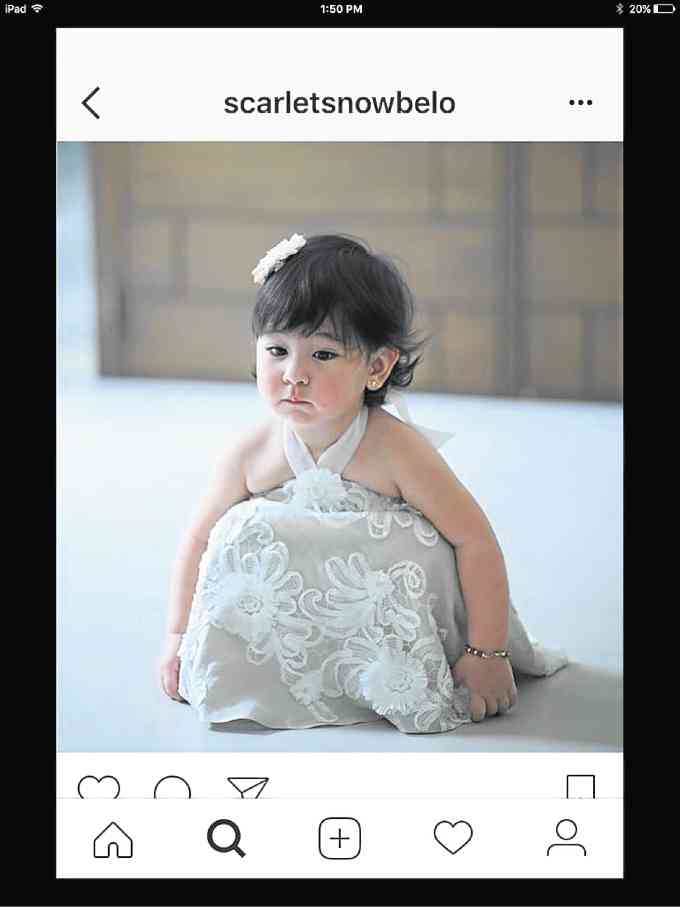 If you still don’t know who Scarlet Snow Belo is, it’s time to sign up on Instagram (IG), where the 22-month-old daughter of Dr. Victoria “Vicki” Belo and Dr. Hayden Kho has over 734,000 followers—around 40,000 short to match those of swimmer Michael Phelps’ infant son, Boomer.

She is possibly the most followed baby girl on IG, with just 218 posts since May 2016. Actually, it’s Dad who posts pics and minute-long videos of the toddler’s adorable antics.

Welcome to the 21st century, where proud parents now show off their kids on social media.

In the past, parents would shoot home movies or fill heavy photo albums with snapshots of their kids’ birthdays and graduations. Now, they can quickly post on IG, where the reactions are instant and usually gratifying.

Until recently, Scarlet Snow’s IG account (@scarletsnowbelo) was set on private, but then Kho would receive thousands of follower requests daily, such that it became too much of a chore. Now, anyone with an IG account can follow her.

“Since I monitor my daughter’s account, I can easily block anyone who makes a nasty remark or comments out of line,” he told Inquirer Lifestyle.

The hands-on, first-time dad has obviously taken his new role of defender to heart. In the latest video posted a week ago, father and daughter play on a padded mat, where he tries to teach her the concept of small, medium and large using building blocks and tiny characters from the “Peppa Pig” show. It has since been viewed close to 400,000 times and “liked” 26,700 times. 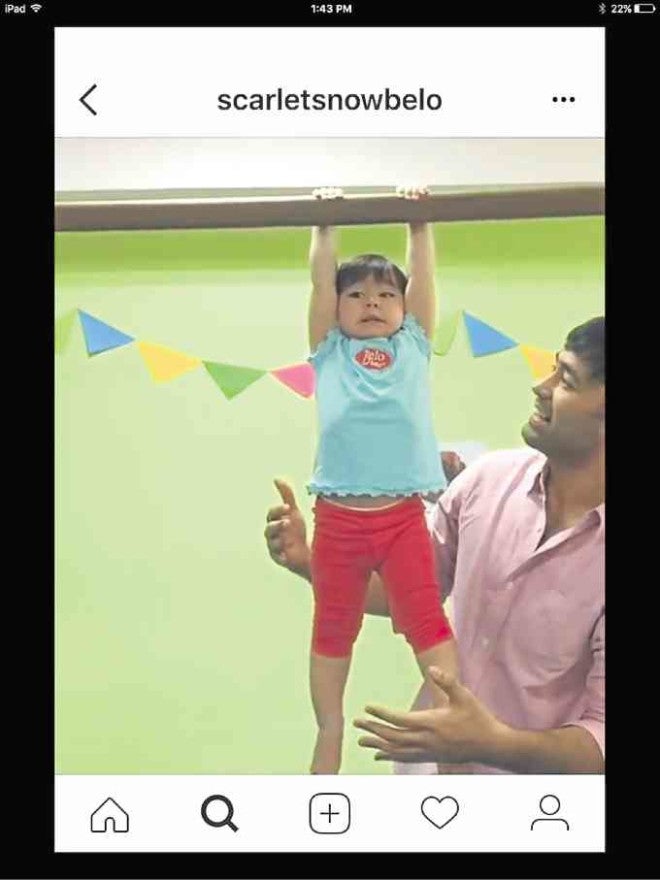 There are some who think exposing a toddler to public scrutiny on social media might have a detrimental effect on her development; however, her parents don’t seem to think so.

“The initial wave of followers on social media may have been because they were curious about the way she was brought into this world (Scarlet was conceived via IVF or in vitro fertilization), but I think the others who followed were drawn by Scarlet’s charm. Over time, it was really Scarlet who was making people happy,” Kho said.

“She is my morning wake upper,” read one comment below a post of a Scarlet Snow photo.

Her godparent, the publicist and talent manager Joji Dingcong, agrees. “If she likes you, she can be a real darling. She calls me Nining and sweetly asks, ‘Nining, how are you?’”

Dingcong narrated how he would wake up early several times a week when Scarlet was still a baby so he could be there when she woke up. He was thus able to establish a relationship with his goddaughter that way.

While her parents should be credited for their daughter’s sociability, her regular classes have also helped.

Yes, at less than two years old, Scarlet is already taking swimming lessons, gym classes and Mandarin classes. She is enrolled in Kindermusik, which is described as “the world’s leading music and movement program for parents and their children, ages newborn to 7 years old.”

Dingcong, who attended one of the classes, said it’s “really parent-child activities. They move around, dance and play. There are other kids and parents in the class so the children become more sociable. They get to see and play with other kids their age.”

Beyond exposing Scarlet to structured education at a very early age, Kho described his parenting style as “intentional,” and one that tackles all dimensions of a child’s development, including her physical, spiritual, emotional and intellectual aspects.

He and Belo ascribe to the intentional rearing of their daughter. “Everything we do has a reason. When we discipline her, there is always a reason behind it.”

For all his strong feelings about how to raise Scarlet, Kho admits he is still also learning. “This is my first time to be a father. I make it a point to read books on child rearing written by Christian authors, and we listen to what our pastor says because we want Scarlet to grow up a God-fearing Christian.”

This early, however, Scarlet has her young life mapped out for her, since Dad has plotted out what she will be doing in the next five years or so, starting with piano lessons in a few months’ time.

Followers will surely be kept abreast of Scarlet Snow’s development as long as Dad continues posting.