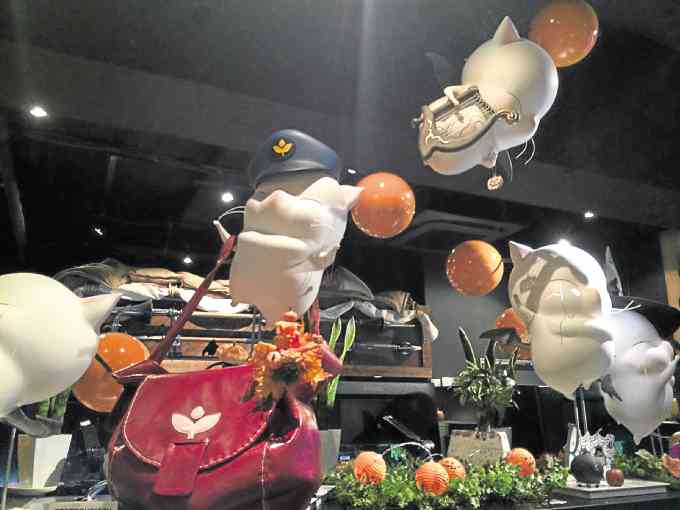 Your Super guide to themed cafés in Japan

In a country where novelty is the norm and cuteness is king, these places stand out in more ways than one. Among the numerous themed cafés scattered all over Japan, we’ve rounded up our top picks.

Note that it will require extra effort and pocket money to find most of these places; plus, the food is often too pretty to eat but too pricey not to. For the self-professed otaku, though, we believe the experience will be totally worth it.

Final Fantasy (FF) fans will get a kick out of this modern-meets-medieval café and bar, which is actually just a very small function room inside the Pasela Resorts entertainment building in Tokyo’s “otaku central” district. You can enjoy artfully designed sweets, savories and cocktails named after familiar characters and potions amid dancing Moogle statues and replicas of FF and FFXIV weapons.

Note that you have to have a reservation to get in, plus the venue itself is very hard to find, giving it an exclusive, “members-only club” vibe. Also, this café does not sell merch, so don’t soil your coasters and place mats as they also double as collectibles.

A newer, bigger option is the FFXV-themed Square Enix Café, which just opened in Akihabara last October. This also requires a reservation, but you can browse through the gift shop. The reservation process for both cafés is a bit complicated, but you can try your luck as a walk-in customer and drop by on weekdays during off-peak hours (after lunch and before dinner). There’s also Artnia in Shinjuku, whose white egg-shaped dome structure houses a café and store dedicated to FF and other famous Square Enix games like Dragon Quest and Kingdom Hearts.

He may not be as well-known as fellow Sanrio character Hello Kitty, but Gudetama has become so popular that he gets his own café, located in the trendy Hep Five mall in Umeda, Osaka. The adorable unmotivated egg is slumped in all shapes and sizes all over the place—on the walls, beside you as plush toys, and in your food. Your eggs even have his sleepy face on them! If it’s possible to die from cuteness overload, this would be the best place to do so. Oh, and a Gudetama Café also just recently opened at Suntec City in Singapore.

Not a fan? Equally kawaii alternatives include the pudding dog Pompompurin Café in Harajuku, Tokyo, Yokohama and Umeda, and Café de Miki with Hello Kitty in Odaiba, Tokyo.

Smack in the middle of Yufuin, a picturesque tourist hotspot a couple of hours away from Fukuoka, is this Peanuts-themed café that combines elements of a modern café and a traditional Japanese cha-ya (meaning teahouse). The cozy café offers matcha (green tea) dessert items and Snoopy-shaped rice meals that you can enjoy amid displays of vintage issues of comic books, old cartoons and other Peanuts memorabilia.

After shopping for Ghibli souvenirs at the quaint Donguri store along Yufuin’s main street, drop by Kiki’s Bakery, a tiny shack in Yufuin Floral Village, for some freshly baked bread and croissants. Coupled with Yufuin’s rustic charm, the experience is as close to magical as you can get.

If you’re in Tokyo, you might want to try getting a ticket for the Ghibli Museum in Mitaka for the ultimate Ghibli experience, then have a bite to eat at the in-house Straw Hat Café after you’re done reliving your childhood. Then there’s Shirohige Cream Puff Factory in Setagaya, which makes the most adorable Totoro-shaped cream puffs. Yup, you read that right. Take note that these cafés are located on the outskirts of Tokyo, so make sure you’re prepared for the trek.

Based on a family of mythical hippo-like characters by Finnish writer-illustrator Tove Jansson, the Moomin are hugely popular in Japan. Understandably, the café is always packed, so weekday mornings are your best bet. What’s great about this place is that giant Moomin plush toys can accompany patrons (especially solo diners) while they have their Moomin-themed European-Japanese fusion meals, which is probably why it’s dubbed as an “antiloneliness” café.

Although there are several Moomin merch shops and stands within Japan, the café has 3 branches as of this writing: two in Tokyo (Skytree and Dome City areas) and one in Fukuoka (Canal City Hakata). If you can wait a bit longer, the first Moomin lakeside theme park is reportedly set to open in Saitama near Tokyo real soon.

Super tips: If you want to hit as many themed cafés as possible, Tokyo would be the best option. If you’re lucky, you can catch the many popup themed cafés that have a limited run. For those going to Yokohama, there’s a “Beauty and the Beast” themed café with matching old-world interior straight out of a movie set. It’s probably not related to the Disney franchise, but with the live-action film coming out soon, this might be worth checking out.