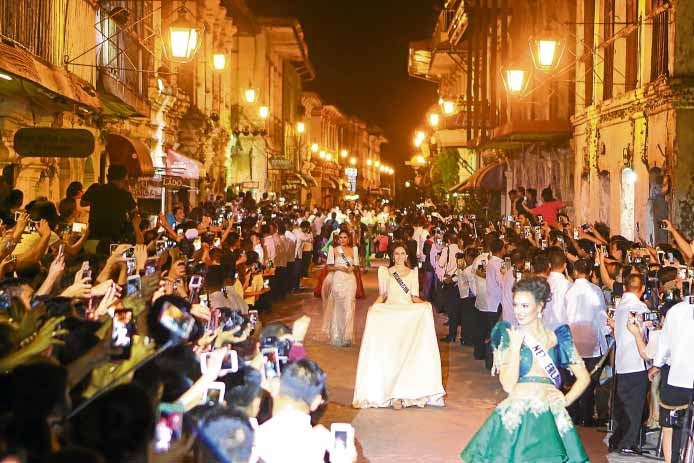 NIGHT OF STREET FASHION Agrand parade through Calle Crisologo in Vigan City greets a cheering crowd of residents and tourists who turned out on Sunday night to watch the Miss Universe Cultural Terno Show at the Heritage City, featuring 20 contestants of the pageant. —WILLIE LOMIBAO

VIGAN CITY—Treated like movie stars, 20 candidates in the Miss Universe pageant walked down iconic Calle Crisologo here on Sunday night wearing the classic Filipino “terno” designed by local artists for a fashion show that drew up to 15,000 people.

Policemen wearing barong Tagalog kept the crowd at bay. Most of the people had their hands raised high to record the show on their mobile phones or tablets.

Dignitaries were allowed to watch close to the stage at Plaza Burgos but the organizers put up giant screens at strategic areas of the city so people could watch the show.

“We are overwhelmed and it has not sunk in yet that we dressed the Miss Universe candidates,” said Gyan Claude Pasion Ben, 27, who designed the gown of Miss Nicaragua Marina Jacoby.

“It was a dream come true for us because it’s every designer’s dream to have his or her creation worn by a Miss Universe candidate. So, it’s actually a privilege for us and an honor to be included in [Vigan’s] big event,” Ben said.

Ben said Sy, president of the Ilocos Sur Designers’ Guild, asked him late last month if he wanted to be one of the designers in the Vigan cultural terno show for the Miss Universe candidates.

He said they were instructed to design a gown that “would not look like a costume, something that was not daring and something that would express fragrance and cleanliness.”

The results were impressive. For instance, Paquing dressed Miss Slovak Republic with an emerald green terno made of “abel Iloco” fabric in a sheath silhouette with high, front slit. The bodice and back were embellished with black embroidery lace and finished with a flowing outer layer skirt in chiffon.

For his part, Ben came out with an off-white Filipiniana with an abel Iloco top covered with a stretched lace.

“I did not embellish the front part. I wanted it to be simple. I put a mesh and did beadworks of pearl [on the back of the dress]. It’s a bias cut skirt, a little flowy, like a peasant’s dress,” he said.

The designers did not know who would eventually wear their creations, according to Ben. It was only on Sunday night, he said, when he learned Miss Nicaragua was picked to wear his design.

“She was pleased with the gown. I told her that the Filipiniana gown represents modesty and purity and I advised her to walk with confidence. And she said, ‘Yes, sure. I love it [the gown],’” Ben said. WITH A REPORT FROM LEONCIO BALBIN