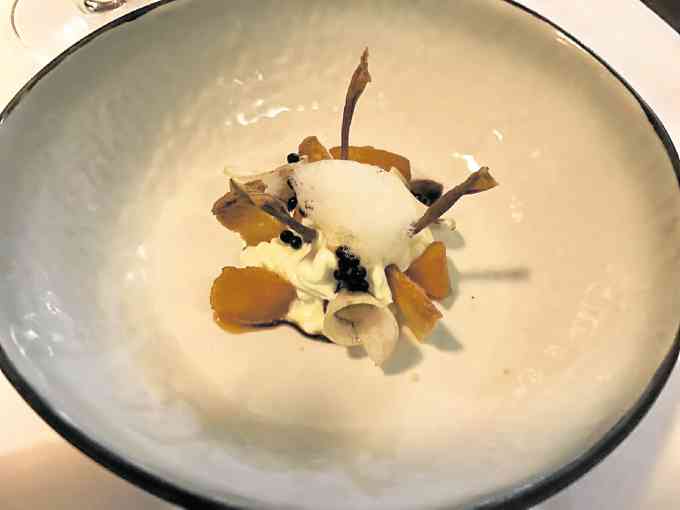 Beyond its trendy name, Foo’d satisfies

It’s been nearly 20 years since food broke free from the straitjacket of women’s magazines and chefs’ industry reports to become a global obsession.

In the 1990s, a groundbreaking magazine, Saveur, combined food and travel and intelligent writing, and made the art and lifestyle of gastronomy oh-so-sexy.

I predicted it would be a passing fad of the millennium, like raves and techno music. No one’s playing Chicane and Aphex Twin anymore, but the worldwide fascination with food, despite a decade of recession in the West, continues.

I had a theory that in a postsexual liberation world, food was a polite way of talking about the last taboo: money. In America it meant status, while in Britain, it symbolized class, an age-old obsession among its citizens.

Stephen Fry famously joked that he was grateful for the existence of Sainsbury’s: “Because it keeps the scum out of Waitrose.” Choosing whether to buy bananas at Tesco, Sainsbury’s, or Waitrose made grocery shopping a political act, or at least one that affirmed your status in society.

Manila is the worst of all worlds—combining the old Spanish attitudes about class and caste with American reverence toward self-made entrepreneurs with the new Asian barefaced worship of money, no matter how dirty. In this world, food is the ultimate humble brag: from the perfectly-positioned shot of one’s business class meal (to include shoes and handbag), to the impossible-reservation meal in an inaccessible location, to the latest openings, the subtext of which says: I have the time and the disposable income to check out all these new places.

Without disparaging those who I believe have a genuine interest in gastronomy and an authentic delight in discovering new places, all too often this is what we talk about when we discuss food.

Into this mêlée comes a restaurant like Foo’d, which heralds its trendiness by having an apostrophe in a strange place. But it has pulled a fast one on you because it’s actually pronounced something like Fuddow.

Its claim to fame is having served a prix fixe Michelin-starred meal for P800 which is, I must say, fairly impressive. In fact, for any restaurant meal under P1,000 is something of a feat these days, unless we’re talking a “bar and grill” split-the-bill thing, for which I would probably pay around P800 for food and a couple of beers.

In a city where food items have turned into Veblen goods (think P600 bags of salted egg potato chips), an P800 meal is cheap for conspicuous consumption.

It turns out that you can make your meal much more expensive by adding upgrades to the prix fixe menu. There is a four-course version for P1,200 which is still reasonable. Not to upgrade seems such an awful waste.

It’s like when you bring your car to the service center for its 20,000 kilometer oil change and the mechanic starts making a sorrowful clucking sound, then calls his friends over and they all start poking at your engine, making sorrowful clucking sounds, and tell you something like this: “We could just do the oil change… But you’ve brought the car in just in time, because, lucky for you, we noticed that the wear on the gasket could make the brakes fail catastrophically and the whole engine explode the next time you’re on the highway.” Conspiratorial whisper: “Better safe than sorry!”

So, you find yourself going all in for the Full Monty.

On a typical French prix fixe menu there are usually only a few items for which you will have to “supplement ¤10”—foie gras or oysters, typically. But here the supplements make up most of the meal. I imagine it’s still cheaper than preparing a full à la carte menu. And honestly, even the upgrades are not terribly expensive.

I don’t know that it’s necessarily worth it or advisable. For instance, I think everyone should try the very excellent starter of Cipolla Caramellata, with a sweet, buttery onion paired with a Grana Padano ice cream on something like a kouign amann.

The shrimp tartare is also very good, but is an additional P380 good? Some, like the sea bass (cooked from frozen and somewhat bland) are something of a downgrade in taste, even if it is supposedly adorned by “caviar D’O” which tasted, at least to me, more like pearls of sago—or perhaps sag’o.

My tip is not go for too many upgrades; the greatest hits are in the basic menu, and you might actually be missing out on the cheap thrills. Spend the money on a good bottle of wine instead.

Of the upgrades, thus far, I can recommend the pea risotto, as well as the veal cheeks. I’m still plotting to go back and try the rest of the menu.

I wouldn’t say this is one-star Michelin food. Ironically, I feel that the restaurant maintaining its Michelin quality even in Manila is Tim Ho Wan, with which this place shares an owner. (2017 might be the year of the cheap Michelin franchise, with at least three confirmed openings: Tsuta (ramen), Kam’s (roast goose)  and Hawker Chan.

But it’s a satisfying meal in a white-tablecloth setting with full table service. The whole restaurant is modular, with shelves and dividers suspended from the ceiling on runners like a set, so that you feel like Cio-Cio San with the humming chorus about to reveal itself behind you. But it’s cozy, intimate, and ultimately enjoyable.

How exactly it’s planning to make money is still a mystery to me, but at the current pricing it’s definitely worth checking out.

A restaurant with decent to good food at reasonable prices? I might have to rethink my theory about food and status. Perhaps those 10-course, P15,000 meals aren’t getting enough hearts on Instagram and people are coming gently back down to earth. —CONTRIBUTED