Miss U bets in national costumes: The best, most creative, most hilarious | Inquirer Lifestyle ❮ ❯ 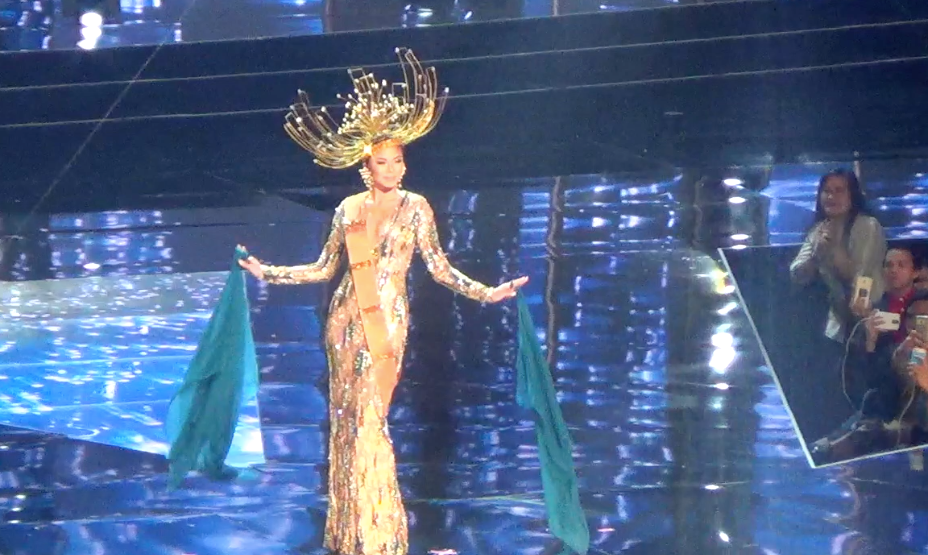 Miss U bets in national costumes: The best, most creative, most hilarious

Which were the best, most creative, and downright most hilarious costumes in this year’s Miss Universe national costume competition?

You be the judge. Here’s a look at some of the national costumes during the Miss Universe “Parade of Nations,” which was held at the SM Mall of Asia Arena Thursday night.

The crowd went wild as Htet Htet Htun tiptoed on stage balancing what seemed to be a backdrop – which opened up to a puppet stage, depicting Myanmar’s traditional puppet show. She even had strings tied to her arms and pretended to be a puppet.

Chalita Suansane, whose arrival to the country went viral because of the number of luggage she brought for the Miss Universe, got the crowd into a frenzy as she sashayed in the traditional golden attire for the Royal Queen in Thailand.

Kiran Jassal wowed the audience in her national costume inspired by the Petronas Towers, a tourist attraction in Malaysia.

Maxine Medina surprised the Filipino crowd in her national costume inspired by the vinta sails of Zamboanga. She also wore a headdress that was inspired by Philippine corals.

Christina Waage from Norway drew applause from the crowd as they realized that she was wearing the classic silvery gown of the character snow queen Elsa in the Disney film “Frozen”.

The crowd was awed by the national attire of Johanna Acs, who wore a castle headdress while holding up a pop-up fairy tale book. Her attire was inspired by the tales of Brothers Grimm.

The hills were alive in Dajana Dzinic’s national costume, inspired by the classic musical “Sound of Music”.

Caris Tiivel’s national costume was glittering with the beautiful colors of the corals of Australia, home to the Great Barrier Reef.

Iris Mittenaere went all cabaret as she wore the actual attire in the musical Moulin Rouge, becoming the first French woman to bring the costume outside France to the Philippines. The crowd went crazy over her cabaret look.

Meanwhile, some of the candidates were not as lucky with their costumes.

Some members of the audience remarked at how the attire of Miss Iceland Hildur Maria, while it was intended to look like a combo of a volcano and glacier, looked like gift wrapping.

It was all about woman empowerment for the costume of Deshauna Barber, who made history for becoming the first Miss USA while in active military service. But the crowd groaned as the wings on her metallic superhero costume failed to pop up.

Magdalena Cohendent’s costume depicted the national flower of her home country. The host had to pick up a petal that fell from her costume, though.

Yam Kaspers Anshel turned to Christianity in her costume look of the Biblical Eve, with a fake snake to boot. But the crowd, even in the predominantly Roman Catholic country, wasn’t that receptive. At least the apple she took a bite of was real.

Mariam Habach was dazzling in her costume inspired by the ocean goddess Yemaya. But the massiveness of her costume got in her way, as she had to kick her feet out of her dress to keep the helm from making her trip.