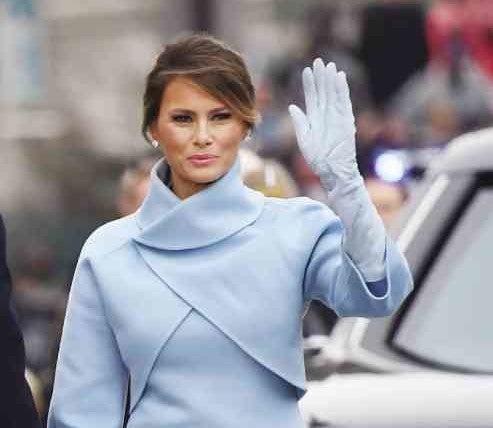 For many Americans and kibitzers the world over, it seems the bigger issue after witnessing the inauguration of Donald Trump as the 45th president of the United States wasn’t whether his first lady, Melania Trump, looked like a style icon-in-the-making in her powder-blue Ralph Lauren (she did), or that the look was patterned after Jackie Kennedy (not unlikely)—but if people ought to boycott the dress’ designer.

After Trump won, many big-name designers came out to say they wouldn’t dress his ex-model wife as their way of making a stand against him, whose campaign was hinged on “the rhetoric of racism, sexism and xenophobia,” as French designer Sophie Theallet wrote in an open plea to her colleagues in the fashion industry.

There was immediate backlash on social media Friday after seeing Mrs. Trump in Ralph Lauren, with many calling for #BoycottRalphLauren, the chosen hashtag.

Anti-Trump supporters saw the American designer’s decision to dress the new first lady as an endorsement and support of her husband’s oppressive views.

The Trump camp had given no indication as to what the new first lady would wear at the swearing-in, a rather crucial detail, especially given her predecessor, Michelle Obama’s special relationship with the fashion industry (to wit, three US Vogue covers).

The former first lady, a Harvard-educated lawyer, was unabashed about her love for fashion. She was adored by designers, and is widely credited for giving the garment industry a boost (she wore high-street brands as well as high-fashion labels) and for boosting the status of some moderately known designers (think: Jason Wu, a young US-based Taiwanese-Canadian whose dress she wore to her husband’s first inauguration).

Popular American designers like Tom Ford and Marc Jacobs had both said they wouldn’t dress Mrs. Trump, while Tommy Hilfiger and Thom Browne said they would. Ralph Lauren’s camp never let on that they were in talks with Mrs. Trump. During the campaign, she wore some looks by the designer, but they were bought off the rack.

Lauren founded the Ralph Lauren brand in 1967, and is synonymous with preppy looks bearing the polo player logo.

In 2015, the designer announced he was stepping down as chief executive of his publicly listed company, but will remain executive chair and chief creative officer.

Glamour magazine reported that the fashion company received complaints on Friday about the fact that the firm did Mrs. Trump’s inaugural dress, according to an unidentified source at Ralph Lauren.

It’s unclear, however, if the so-called boycott would actually prosper. It’s worth noting that Hillary Clinton, who lost her presidential bid to Donald Trump, also wore Ralph Lauren at the Trump inaugural.

Clinton, a former senator and first lady herself, relied on the brand for most of her wardrobe during the campaign. She wore a white pantsuit at the swearing-in of her opponent.