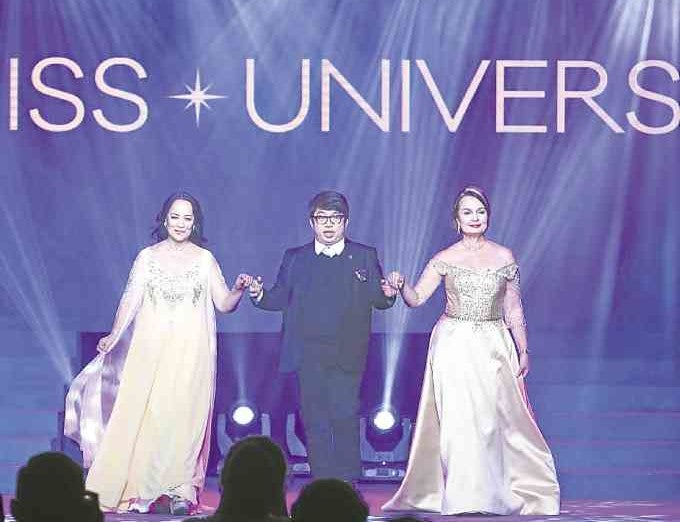 Some clothes didn’t make it on stage, but overall, Pinoy pride was on full display Monday night as 86 of the Philippines’ finest fashion designers wowed audiences at the National Gift Auction gala night of the 65th Miss Universe pageant at Conrad Manila.

An ancillary event of the beauty pageant, the formal affair provided an opportunity for the chosen designers to showcase their craft, in evening gowns worn by the 86 candidates.

The designers were matched to the candidates in alphabetical order, and were assigned colors of the Philippine flag.

Tonichi Nocom, president of the Fashion and Design Council of the Philippines (FDCP), said all apparel designers of his organization were invited, but only 17 chose to participate.

In a previous interview, Albert Andrada, the event’s project director, said his committee invited designers from all over the country.

Lifestyle also learned that some designers were left in tears, as some of the candidates chose not to wear the dresses assigned to them. Others opted to swap.

“They were disappointed, but that was part of the agreement,” said Nocom, who added two FDCP members’ designs weren’t used, while that of another was swapped by the candidate assigned to him.

“Our role primarily was just to provide the clothes exactly as in the sketches that were submitted,” Nocom added. “We learned that some dresses didn’t fit the candidates well. They did their own fittings. In the end, it was the candidates’ decision. We only found out who wore what at the same time as everyone else: during the show.”

And what a show it was!

PHOTOS BY NELSON VILLARICA, COURTESY OF THE FASHION AND DESIGN COUNCIL OF THE PHILIPPINES (FDCP)