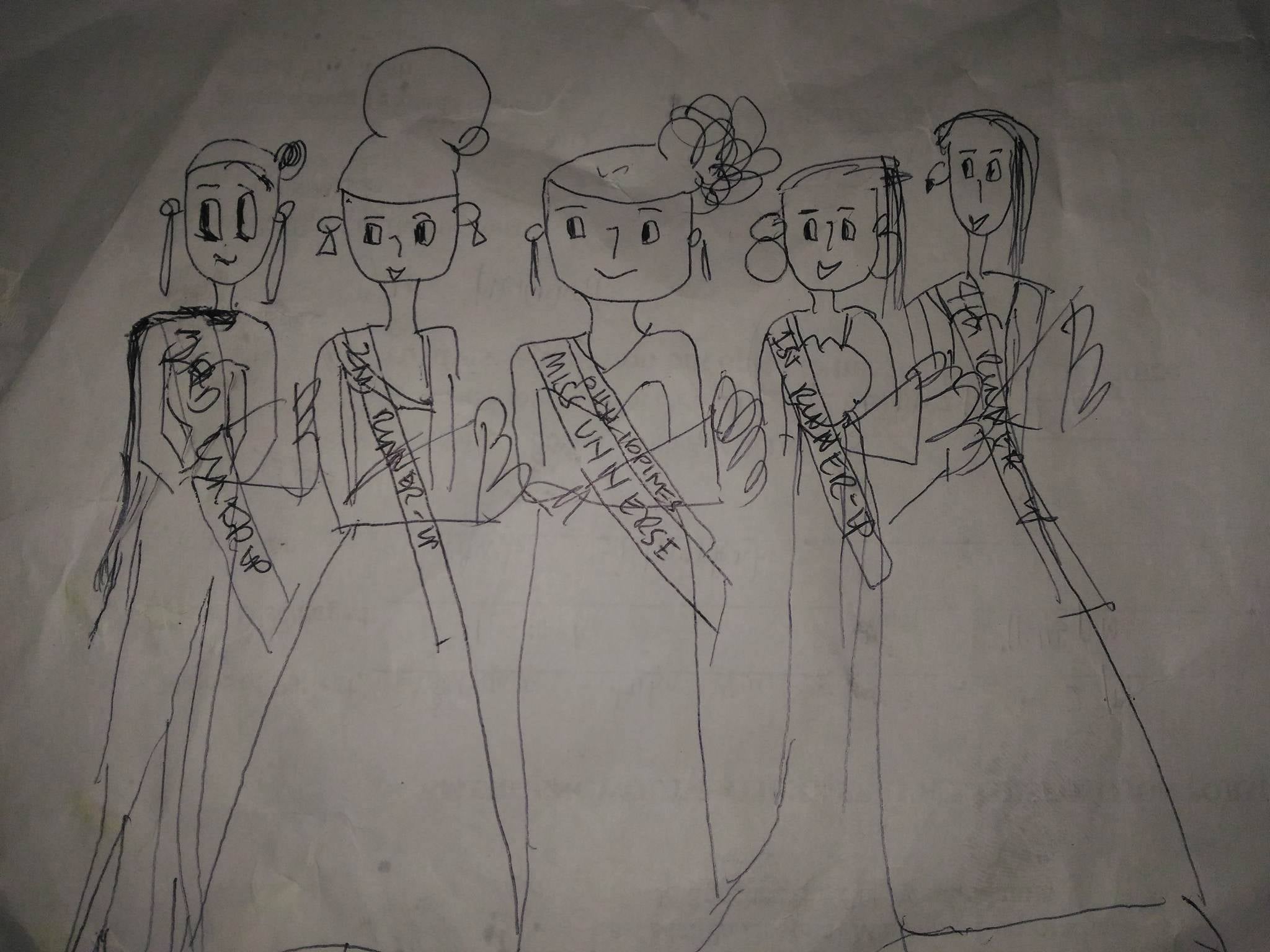 JP Bayang, as a kid, would draw his "royal court." He describes his Top 5: The winner had a sweet beauty; the fourth runner-up had to look bitter and "chaka."

“I was in a youth camp then, and the venue was a bukid in Aklan. I excused myself, said I needed to enroll online,” said the Med student. “Thankfully a house nearby had Wi-Fi, and the signal was strong.”

“I was ‘enrolling’ for three hours.”

Narratives like this prove that Filipinos have a near-religious dedication to pageants, more so Miss Universe. Fans this side of the globe are willing to do a variety of things just to see the pageant.
“Pageants are like boxing and basketball,” explains New York-based investment banker and pageant enthusiast Gilbert Dychiao. “We are crazy about things we are good at. We are excellent in boxing and basketball, and Filipinos are beautiful, period.”

Dychiao has never missed a Miss Universe contest since 1987. He’s even followed the pageant to Mexico, Puerto Rico, Bahamas and Brazil. He saw in person the fiasco last year in Las Vegas. He will come home to Manila to watch the pageant live for the 15th time since 1990.

He wants to be here for Maxine Medina as he was for Charlene Gonzalez in 1994. Tinio owns normannorman.com, a website that provides daily blogs about pageants, from interviews with candidates to predictions. He has become a fixture in pageant events. He’s made a life around pageant coverage and training.

These fans always trace the love of pageants back to specific moments. For Dychiao, it was in 1987, rooting for Italy’s Roberta Capua, runner-up to Chile’s Cecilia Bolocco. Tinio’s interest began with Gloria Diaz’s victory in 1969 and grew after Margarita Moran won four years later.

For a younger generation of pageant fans, following almost always certainly began with Maria Venus Raj, who in 2010 ended a decade-long drought at Miss Universe and ultimately cracked the Top 5.

“I’ve been watching pageants since childhood, but wasn’t really a fanatic until I saw a picture of Raj on Facebook back in 2010,” says Drew Francisco, a Web production editor for a British online newspaper.

“I’ve been aware as early as 2001-02, but I attempted to backtrack only in 2009 with Bianca Manalo, during the Asian shutdown in Bahamas. The Internet was slow because I was still in Iloilo,” remembers Bayang.
“It was with Venus Raj, when I was already studying in Manila and the internet was better, that I began really reading up—from Missosology to Sash Factor, etc.”

Many pageant followers find it crucial to stay in the loop, and that means knowing which candidates to watch, the endless rumors and, believe it or not, even superstitions.

Francisco has two endeavors that keep him informed. First, he owns Pageant Focus by Haraya and, since 2013, has been a correspondent and editor for Missosology, the biggest pageant portal in the world.

It’s become second nature for Tinio. “I don’t make a conscious effort to do so. My interest is passion-filled so I just take everything in like your daily newspaper or like knowing all the names of the candidates without actually memorizing them in one sitting.”

Given the wealth of information now available and the dedication people invest, the fans can now also be experts. They can release their “predictions” and answer every “why” thrown at them. Some have their own standards, their own reading of politics, their own processes.

For Bayang, the candidate has to first fit the beauty archetype favored by a pageant, such as a Barbie look for Miss International or an edgier look for Miss Universe. Then he scrutinizes the delegates to go through that first filter.

“Gut-feel, pageant experience and inside stories” are Tinio’s three-fold gauge. “There is a line between objectivity and subjectivity that I try not to blur in the process. Staying in the firing line is the best place to be in making forecasts.”

An eye “is something you develop through years and years of following the pageant,” Dychiao says. “Just like any craft that becomes your passion, you get better and better at it over time. This is my passion, and so I pursue it with zest and vigor.”All four pageant enthusiasts believe Medina can make it to the Top 3.

Believe it or not, other people would involve fortune-telling, séances and other supernatural stuff. In the practice of predicting, however, success rate is the currency.

Another exciting aspect of pageant-love is the mastery of data—the more you know (and the more unique the information you have), the better you are in the eyes of your fellow followers.

“I can name every single winner since the pageant’s debut in 1952, or name where the pageant was held each year since 1973 (the first time it was held outside the US), or name all the runner-ups since 1987,” notes Dychiao. Sometimes, he admits, he would amaze friends with his mastery of pageant trivia.

Tinio says that no winner of the award Miss Congeniality or its equivalent has ever won the crown at Miss Universe. He tells us it’s just one of his many favorite factoids about the pageant. Their inclination for pageants enriches them, all four agree.

“The downsides are minimal if you measure the upticks,” Tinio says. Because of his involvement with Missosology, Francisco has been able to meet candidates and travel abroad.

“Watching pageants, it’s a matter of pride,” Bayang notes. “I really love seeing a Filipina on that platform. I don’t wanna be there, but I want somebody to be there.”

“It is an interest that adds a little bit excitement to my stressful career,” says Dychiao, who works in banking. It is only one of his many hobbies. There’s also culture, travel, food and film (he follows the Oscars and is excited about “La La Land”).

None of them see the pageant as detrimental to women.

“Times have changed,” says Tinio. “I know a lot of women who have already moved on. Don’t you think it’s high time to look at Miss Universe from a more progressive angle?”

“I think pageants are beneficial in fostering social causes, in empowering its participants to promote various initiatives and be a positive influence to those around them, in providing healthy competition and unity in diversity amid a growing worldwide protectionist trend, and more importantly, in allowing young women from all over the world to dream, and dream big,” says Dychiao.

Francisco channeled Lara Dutta’s winning answer during Miss Universe 2000: “It allows women to foray into the fields they want to pursue.

Bayang said: “I don’t think they have a profound understanding of the matter. You can say that for barangay beauty pageants because they can be plain spectacle, plain entertainment. Miss Universe is different. There’s advocacy, and people pay big money to get in.”

Where will Bayang be during the coronation this time? “I have a class, but I will definitely find time to watch it on TV.”