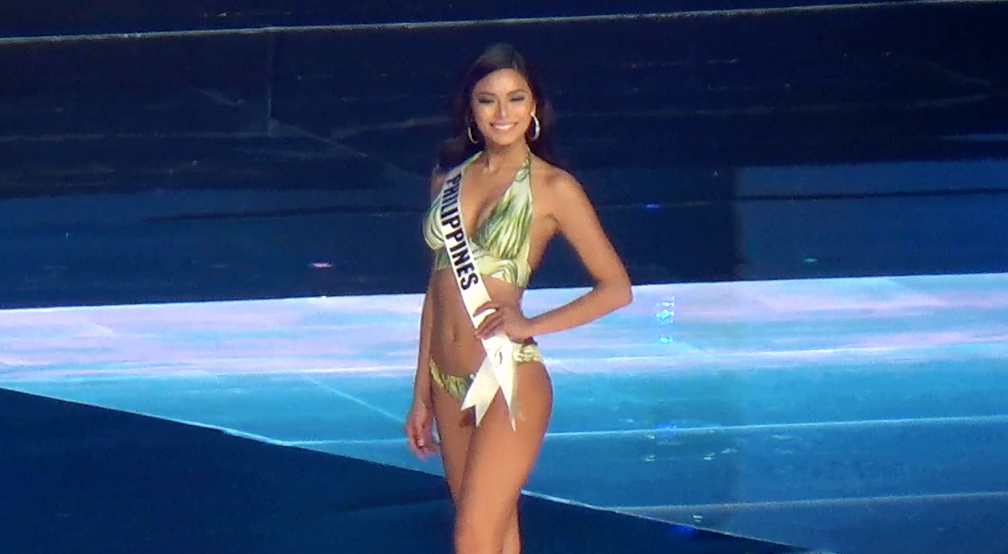 Maxine among Miss U front-runners

Maxine Medina, the Philippines’ bet to the 65th Miss Universe pageant in Manila, cemented her place among the contest’s front-runners after the crucial preliminary swimsuit and evening gown competitions on Thursday night.

The preliminary competitions, along with the closed-door panel interview and online votes, will determine the 12 beauty queens who will advance to the semifinal round. Voters can cast their online ballot on the official website of the Miss Universe competition.

Also in the list were early favorites Andrea Tovar from Colombia, Mariam Habach from Venezuela, Kristal Silva from Mexico, Hawa Kamara from Sierra Leone and Raissa Santana from Brazil.

Mentioned by Isler and Glebova as well were Estefania Bernal from Argentina, Caris Tiivel from Australia, Iris Mittenaere from France, Keity Drennan from Panama, and Chalita Suansane from Thailand.

The website has not released its official list of final predictions for the 65th Miss Universe pageant as of press time, but its initial assessment of the Filipino beauty said she is a lock for a Top 10 spot, and that a Top 5 placement would not be a surprise.

The site gave Tovar an initial prediction of a Top 10 finish, but said a shutout from the semifinals may be possible for the Colombian queen.

Margie Moran, Miss Universe 1973, also picked Medina as one of her favorites to win the crown, and said that the Philippine representative owned the stage in the national costume and long gown rounds.

Moran, however, singled out Miss Universe Myanmar for being “so original.”  Htet Htet Htun, who earned the loudest applause and cheer in the national costume round, managed to mount a puppet show starring herself.

But Medina’s odds are not as favorable in betting sites. US-based betting site, BetOnline, puts the Filipino beauty queen on the eighth spot, tied with the representatives from Georgia, Indonesia and Great Britain, with a +1400 score. Tovar topped the poll with a +250 mark, trailed by fellow Latina Valeria Piazza from Peru who scored +700.

British betting site Pinnacle.com also received the most bets for the Colombian beauty, with a 3.40 chance of winning, followed by Santana and Piazza with a 9.74 odds.

Australian betting site WilliamHill.com gave the Filipino beauty queen the ninth spot, tied with the beauties from Great Britain, Indonesia, the Dominican Republic and Japan, with a 15.0 score.

Just like in Pinnacle, Tovar also topped the Australian bookmakers, followed by the candidates from Brazil and Peru, who tied for the second spot.

Meanwhile, 1969 Miss Universe Gloria Diaz’s declaration that, in her opinion, Medina won’t score a back-to-back victory for the Philippines in the Miss Universe pageant may be disputed by a quick look at the contest’s history, as well as a review of the record of other global tilts.

Diaz said it could be an uphill battle for Medina because her win might be viewed by many as a hometown decision.

“She can be first runner-up,” Diaz said in an earlier interview.

But Puerto Rico’s Denise Quiñones who, in 2001, became the first host delegate outside the United States to bag the Miss Universe crown, showed that a hometown decision was possible.

Quiñones topped both the swimsuit and evening gown rounds during the final telecast, giving critics no reason to doubt her win.

And despite the Miss Universe competition being a US-based pageant, several American beauty queens have won in their own soil.

As for a back-to-back win, Venezuelan beauties Dayana Mendoza and Stefania Fernandez were Miss Universe in 2008 and 2009, respectively.

In the rival Miss World pageant, three back-to-back victories have been recorded. In fact, its first two editions saw Swedish beauties Kiki Hakansson and May-Louise Flodin bagging the title in 1951 and 1952, respectively.

British contestants Ann Sidney and Lesley Langley duplicated this feat in 1964 and 1965, respectively, in London.

The most recent back-to-back Miss World victories came from India, with beauty queens Yukta Mookhey and Priyanka Chopra in 1999 and 2000, respectively. Both wins were warmly received by the global pageant community.

In the Miss International pageant, host country Japan won the crown in 2012 with Ikumi Yoshimatsu.

The following year, she relinquished her title to Manileña Angelia Ong in the pageant staged in Austria. Filipino beauty Karla Paula Henry also became the first host delegate to win the Miss Earth crown in 2008 when the pageant was held in Clark Field, Pampanga.

Hometown bets Guadalupe Sanchez and Charlene Gonzales did not go home empty handed either when the Philippines hosted the Miss Universe pageant in 1974 and 1994, respectively.

Sanchez advanced to the semifinals in 1974, while Gonzales finished in the Top 6 in 1994.

Reigning Miss Universe and Filipino beauty queen Pia Alonzo Wurtzbach will relinquish her title on Jan. 30 during ceremonies staged at the Mall of Asia Arena in Pasay City.