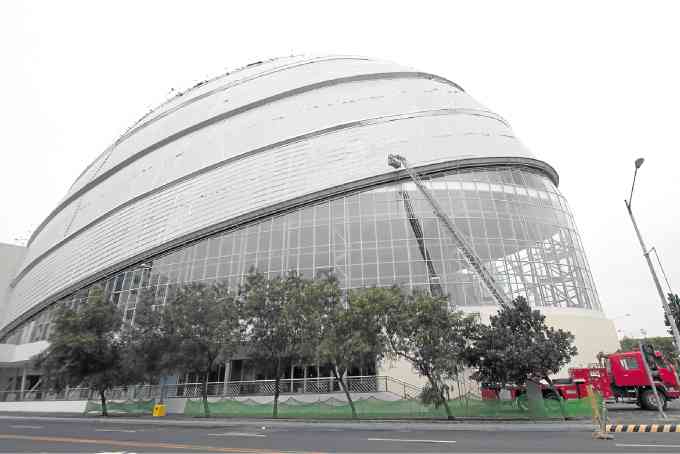 A new landmark is set to rise this year as a homage to the Philippines’ barely known contribution to international commerce and globalization.

Construction is in full swing at The Galeón: The Manila-Acapulco Galleon Museum at the SM Mall of Asia (MOA) Complex in Pasay, a first-of-its-kind museum that showcases the leading role Filipinos played in the galleon trade during the Spanish colonial era.

The brainchild of former Senate President Edgardo Angara and former Mexican Ambassador to the Philippines Tomas Calvillo, the galleon museum is set to open sometime in July.

“It is, above all, a teaching museum for our children,” Angara said in a recent Inquirer interview. “This will be a classroom for young Filipinos to look back at their past and say  ‘We are also capable,’ ” added the former chair of the Metropolitan Museum of the Philippines.

The trading galleons, which traveled between Manila and Acapulco in Mexico, also a Spanish colony at the time, are credited for funding the Spanish empire, Angara said.

From 1565 to 1815, the galleons, many of them made in Cavite province by Filipino artisans using indigenous Philippine wood and other materials, facilitated the exchange and spread of goods from across the Asia-Pacific, Latin America and Europe.

The retelling of history has, however, buried the role the Filipinos played in the Spanish-led galleons, Angara said, even as they practically steered the trade, manned the decks, and built the ships that navigated the long and treacherous journeys.

“We initiated globalization. We connected the four continents,” Angara said.

To honor the exploits of Filipino mariners during the colonial era, the Sy family who owns the SM malls, partnered with the Angara-led Museo del Galeón Inc. for the museum project, donating prime space at the MOA complex and funding the construction of the building estimated to cost P600 million.

The four-story structure, with its imposing dome-shaped roof, has been under construction since November 2014.

The galleon museum is touted to complement the Exploreum, an interactive science exhibit hall at the other end of the MOA entertainment building, and will be the first exhibition in culture and history at the mall complex that some 300,000 people visit every day.

For the Sy family, the museum is part of building “a legacy” in culture and the arts, museum curator Janine Cabato said.

As its main feature, the galleon museum will serve as a workshop for the construction of a faithful replica of an 18th century galleon, the Nuestra Señora del Pilar de Zaragoza, built at a Cavite naval shipyard.

The workshop of building the 6o-by-40-meter ship that is fully fitted with canons will dominate the high-ceilinged structure and will be the centerpiece of the building’s second floor.

When the museum opens this year, visitors can expect to see at least the keel of the vessel, a rib-like skeleton of the ship’s hull, and the figurehead at the ship’s prow. The galleon would then be built over a period of two to three years, with the construction work itself becoming the museum’s main attraction.

By the time the vessel is finished, visitors may go inside through an access platform at the fourth floor, which is also the viewing deck.

“[The galleon ship] is going to be really high,” Cabato said.  “[I]t’s a castle filled with a lot of stuff, the primary reason for the building’s dome-shaped design,” she added.

The workshop will also feature an augmented reality display so visitors can see how the ship will be constructed.

“If you look at the keel, it’s really just a skeleton of the ship. But if you see (the augmented reality), you’d see the wood flying in and the ship being built,” Cabato said.

On its debut year, the museum will feature exhibits of galleon trade artifacts from different parts of the world, starting with loaned pieces from the Franz Mayer museum in Mexico City. Artifacts from the Museo Internacional del Barroco in Puebla City, Mexico, will be featured in 2018, and from the Museo Naval de Madrid in Spain in 2019.

A key part of the facility will be the Center for Pacific Trade and Cultural Studies, initially an institution for Filipino and Mexican scholars that will “support the academic development” of the galleon museum.

The museum has invited eight Mexican research institutions to participate in the studies center, while two Philippine institutions have signed up.

The center is expected to draw up research projects on the “social, cultural and commercial realities” in the Asia-Pacific region, and to find “alternative solutions [to] the challenges of regional integration,” read a briefer on the museum.

Angara said he intends to invite representatives from member countries of the Association of Southeast Asian Nations (Asean) and other Asia-Pacific leaders to grace the opening of the museum which coincides with the Philippines’ hosting of the Asean’s 2017 summit, incidentally the bloc’s 50th anniversary .

“The Asean is the longest running bloc now, older than the European Union and the Latin American bloc, and we’ve been able to keep it together,” the former senator said.